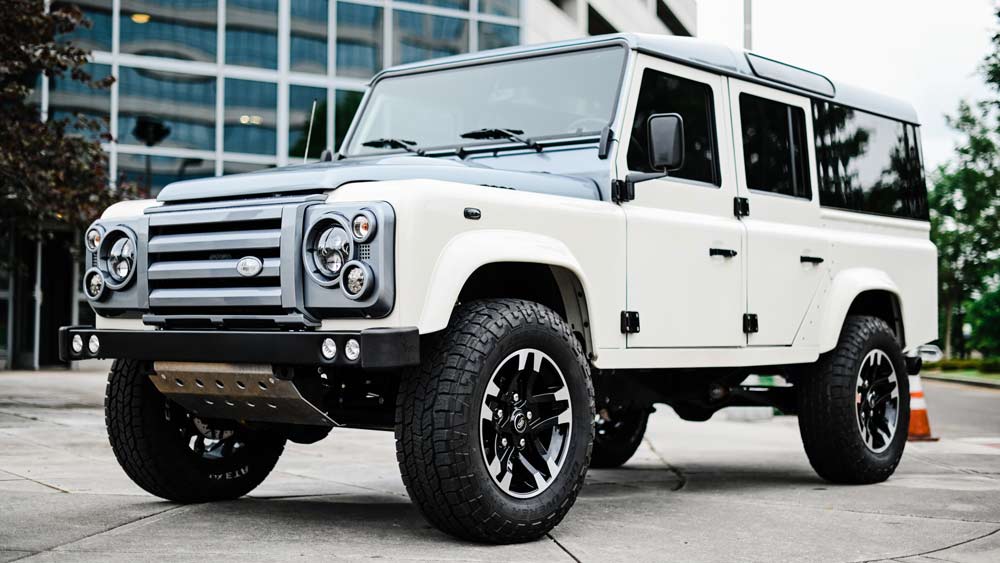 Few automobiles have accrued as ardent a following as the Land Rover Defender. Just ask England’s Royal Family. The vehicle traces its origins back to the original Land Rover of 1948, then the updated Land Rover 90 and 110 models from the 1980s, which finally acquired “Defender” branding in 1990. Throughout the years the model has defined itself with remarkable all-terrain versatility tempered by suspect dependability.

But those dependability issues, along with the fact that Land Rover stopped selling Defenders in the US from 1997 until the new generation was released last year, has helped spawn an entire niche economy around Defender restorations and restomods. One restoration house that’s made a name for itself is Osprey Custom Cars out of Wilmington, N.C., a small outfit that has earned an outsized reputation for quality and level of customization, whether resurrecting a barn find or creating a new build from existing components.

Among Osprey’s most recent examples is a 1993 Defender 110 which now makes 600 hp. The output upgrade comes from a supercharged LSA V-8 that churns out 580 ft lbs of torque and is mated to a six-speed automatic transmission. The bolstered assembly includes a galvanized chassis (powder-coated black); medium-duty springs, shocks and steering components from Terrafirma; heavy-duty front- and rear anti-sway bars and four-wheel, power disc brakes. The interior is equally elevated thanks to an Alcantara headliner, a leather-swathed console and a 7-inch touchscreen infotainment system compatible with both Apple CarPlay and Android Auto.

A recent visit to Osprey’s facility provided the opportunity to pilot a similar 110 project on highways, through town and on country roads. The feeling behind the wheel, gazing across the period-correct wood-grain steering wheel and over the iconic front end, made me long for a pair of Irish Setters in the back seat and maybe a cottage in Scotland’s Lake District. But the whirring of the supercharger, like the late Eddie Van Halen riffing an endless high-note, along with the diamond-stitched seats and brushed aluminum trim reminded me that this is less work truck, more a work of automotive art. Sure, there’s some play in the steering, less-than-precise road feel and a few creaks and squeaks, but it is, after all, a Defender.

After a day of driving and a tour of the operation, I asked Osprey founder Aaron Richardet, a practicing chiropractor, about the start of his journey with Land Rover, where it’s going and how he balances two careers.

How did your love for Land Rover begin?

It was 1994, and one of those things I remember almost like when I first met my wife. I was going to watch these bands play at Union Station in downtown St. Louis, and I walked in and saw a [Land Rover] Discovery on display and had never seen one before. I later went to the nearest dealer and there was a Defender parked up on the rocks. Looking at the price tag of $32,000, in 1994, I figured that dream just got smashed.

But with the lineage of the model, and then its primitive nature, toughness and uniqueness, I was smitten. When Land Rover pulled the plug on the Defender for the US market in 1997, prices tripled. I was about to get out of college and that was house money. I bought my first Defender, a red NAS [North American Specification] 1995 Defender 90 in 2004.

How did the name Osprey come about?

I started off as a company called Rover Recycler because I took old Land Rovers, stripped them down and sold them for parts on eBay. I live in Wilmington and we have the University of North Carolina Wilmington, the home of the Seahawks. Osprey is the actual name of the bird, and there’s also the nearby Marine base with the V-22 Osprey [aircraft], so I went with the Osprey moniker for its utilitarian and military vibe.

Explain the transition from recycling parts to creating high-end builds.

I started stripping the cars at home, and that grew into a business, then started working on other people’s Discoveries, focusing more on off-road versions. We became very involved in the community for off-roading and started doing lift kits and winches and racks, all that stuff, and soon had a few key customers that also had Defenders. I’m like, “Okay, cool. Let’s play with it.”

That’s how we started modifying, customizing and restoring them. That was around 2009, when an influx of cars began being imported into this country. Around 2015 we made the decision to do nothing but top-spec trucks. Our primary function here now is really twofold: to build brand-new trucks and do NAS restorations.

You are still a practicing doctor of chiropractic. How do you handle both?

I grew up on a farm and was always working, seven days a week. So I was seeing patients but also wanted something I could do at home on my own time and not take away from my practice or family. I would be in my garage on the weekend doing engine swaps, trailers moving in and out, but it would all go away by Monday. When the business grew, I ended up with a shop about a mile away so I could just run down the road. I did that for years. I still see patients three to four days a week, and come here [the Osprey shop] in the mornings, lunch, at the close of the day and on weekends. The guys get their in-between time to keep everything going. The big thing I juggle is that I also handle the vehicle delivery to clients.

Do you find any similarities between the two vocations?

I enjoy the trust and the faith that patients give me, and it’s the same thing here. People give me that faith to make it good.

Walk us through the process of a new build.

The first thing we do is converse about what you want. A lot of people have a good idea, at least when it comes to body style. Then I start asking questions. “What do you want to use it for? How are you going to drive it? Where is it going to be?” I’m trying to make sure that the package is fitting for your lifestyle. Then I’ll start sending you a bunch of samples. “Let’s do these wheels, this tire package, color and trim.” And then we have it all drawn up, everything itemized out that you’re going to get on your truck, how much it’s going to cost and an estimate on the timeframe.

I buy my engines straight from GM. We have brand-new chassis that we cut and change for our mounting systems, then we weld everything on. We rebuild the axles, rotors, calipers—everything. The thing that takes the longest is the interior.

As far as payment, it’s a third down to start, a third once I have the rolling chassis with the body on and then the final third is due when I deliver it—and that’s included. Generally, the process takes roughly four to six months.

What basic packages do you offer?

Our base-spec trucks feature the LS3 engine, six-speed automatic transmission, heated leather seats, navigation, backup camera, Bluetooth, keyless entry, remote start … they’re loaded out. For our [Defender] 90s we’re at $130,000, whether soft-top or hardtop. The 110 and 130 are $180,000. The only real upsells are if we go with a bigger engine, like the LSA, or add aluminum trim.

What are some of the more elaborate customization requests you’ve completed?

We’ve done hidden gun compartments with biometric scanners. They’re tucked in so that when you look inside the truck you don’t see anything. We’ll do hidden custom lockers and cabinets, and handle the fabrication for all of it. Now, when we do something like African teak floors in multi-colors with an inlay, we bring in outside artisans.

Are there other elements that you farm out?

We don’t do interior stitching. That’s pretty much it. Most everything else we handle in-house.

Even though you offer certain packages, is every vehicle a one-off?

Oh yeah, that’s why I name them. We’ve definitely done over 500 trucks and no two are exactly alike. There’s a different suspension, wheels, a roll cage on this one, a different interior. That’s what gives each its own personality.

What would you tell someone trying to decide between the new Land Rover Defender or one of your examples?

Oh, it’s like comparing applesauce and mayonnaise. You would never use them for the same thing.

Aaron Richardet at his facility in Wilmington, N.C.  Photo by Viju Mathew.

How do you feel about Land Rover bringing the Defender back?

It’s great for me. People who were in college back when Land Rover brought over the Defenders that closely mimic what I build, they’re influencers and making money today. Now they’re like, “I forgot I wanted that. But not the new one, I want the old one, that’s the real one.” The new ones at full spec are not that much farther off in price than where mine start, and those are going to depreciate. Honestly, I’ve been waiting on this for years.