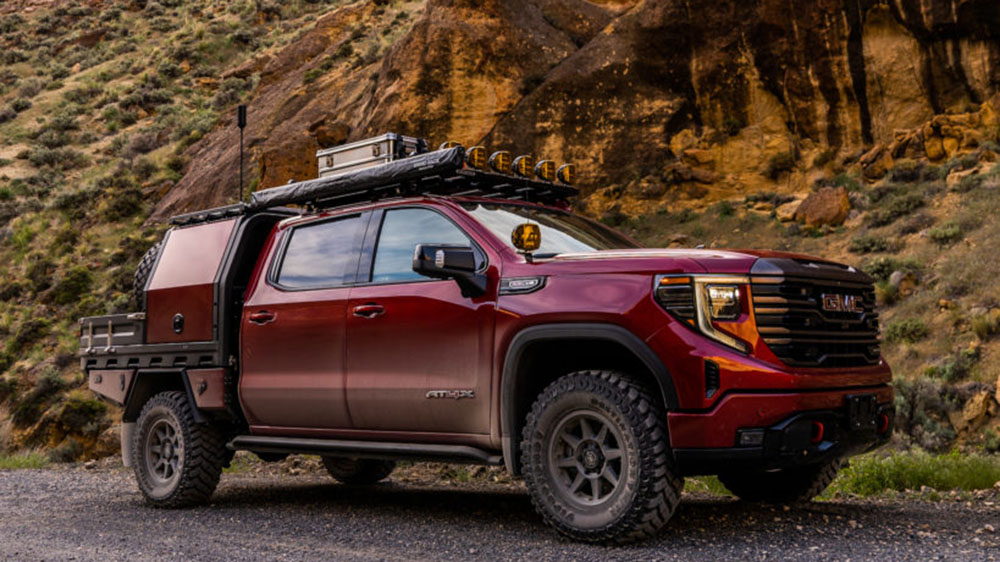 The group behind the Overland Expo is concerned with more than just hosting events.

For the second year running, organizers of the multi-event tradeshow have built what they’re calling the “Ultimate Overland Vehicle.” And in 2022, the ultra-versatile bruiser is built on the bones of the new 2022 GMC Sierra 1500 ATX pickup truck.

Although it been equipped with a number of after-market add-ons, Overland Expo’s Sierra looks just like any other dual-cab version of GMC’s truck, except for one big difference: the cargo bed. The designers of the trade show’s build have gotten rid of the standard bed and replaced it with a 6.4-foot-long MITS tray topped by a three-foot-long canopy that’s affixed with a solar panel, according to a press release. The new tray is filled with eight-gallon water tank, side-mounted storage bins and a full-length drawer. The canopy, meanwhile, is home to a camp kitchen from Green Goat Outdoors, Geyser System outdoor shower and a DOMETIC CRX 110 fridge powered by a pair of lithium ion batteries. Located behind the canopy is one of 23 ZERO’s two-person Outbreak 1550 Swag ground tents.

On top of the truck, you’ll find a bank of Rigid Adapt XP lights and well as an extendable awning in case you ever need the shade while stopped. The roof, which is equipped with its own rack, it also home to much of the vehicle’s communication hardware, including a GMRS radio, Zoleo satellite receiver and cell signal booster. It also carries some recovery gear and tools in case you ever get stuck.

Despite all the modifications to the four-wheel-drive Sierra, Overland Expo has mainly left its 420 hp, 6.2-liter V-8 powertrain alone, with the exception of adding a MagnaFlow exhaust. The truck has also been equipped with some off-road friendly upgrades like Firestone Ride-Rite air springs and 17-inch alloy wheels wrapped in 33-inch Firestone Destination M/T2 tires. Those last two modifications will help the four-wheeler travel over any kind of terrain in relative comfort.

You’ll be able to check out Overland Expo’s 2022 “Ultimate Overland Vehicle” at any of the trade show’s four events—which will be held in Arizona, Oregon, Colorado and Virginia—this year. After that, you can make the modified Sierra 1500 ATX pickup your own. It’ll eventually go up for bid on Bring a Trailer, with 100 percent of the sale proceeds going Overland Expo Foundation charity.