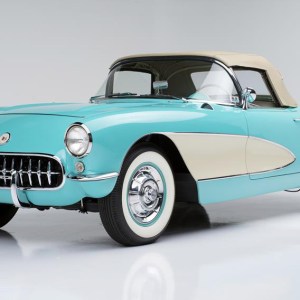 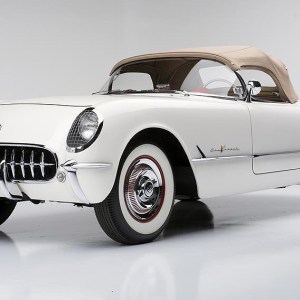 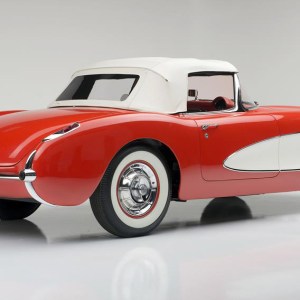 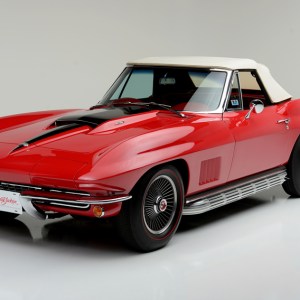 Barrett-Jackson, The World’s Greatest Collector Car Auctions®, is set to light up the auction block with an eclectic docket of Chevrolet Corvettes during the nine-day 45th Anniversary Auction from Jan. 23-31, 2016, at WestWorld of Scottsdale. Among these highly sought-after American cars are three VIN #001 Corvette convertibles from 1955-1957, a 1954 roadster that was entombed until 1986, as well as two of the greatest original 1967 427/435s to ever cross the block. “I couldn’t be more excited about the docket of Corvettes that are consigned for our 45th Anniversary Auction in Scottsdale this coming January,” said Craig Jackson, chairman and CEO of Barrett-Jackson. “We always have exceptional groupings of Corvettes at our auctions, but this may be the best we’ve ever consigned.”

Three VIN #001 Corvettes from 1955, 1956 and 1957 will cross the auction block at the 45th Anniversary Scottsdale Auction. The 1955 convertible (Lot #1351), wearing a Polo White exterior, features a 265ci V8 engine and scored a 99.3 that led to a 2008 NCRS Top Flight award. The Venetian Red and white 1956 convertible (Lot #1352) features the first dual 4-barrel production engine and is rated at 225hp with a special solid-lifter Duntov 098 camshaft. The third VIN #001 Corvette is a 1957 Cascade Green and beige convertible (Lot #1353).  It was not only the first production 283ci Corvette, but the first production 283ci Chevrolet vehicle with the majority of the components dated July 1956, including the engine, transmission and differential.

Among the most anticipated Corvettes set to star at the 45th Anniversary Scottsdale Auction is the famous “Entombed” Corvette. This 1954 Corvette roadster (Lot #1279) was owned by Richard Sampson, a successful business man in Maine who entombed the car in a brick and mortar vault in 1959. It was removed by Sampson’s daughter in 1986 and has been preserved ever since. An amazing piece of American history, this Corvette has the same 2,335 miles that were on the odometer when it was finally saw daylight again, 28 years after its entombment.

“Every one of these Corvettes has a story associated with it,” said Steve Davis, president of Barrett-Jackson. “It has been exciting to work with their owners who have cared for these remarkable collector cars. I think it will be just as exciting to see these cars pass on to the next set of owners, who will help carry on and preserve these amazing Corvette legacies.

Alongside the “Music Car” is another very rare, original 1967 427/435 Corvette coupe (Lot #1371). It is one of very few documented 1967 435s produced in Tuxedo Black with black leather interior. This Corvette features the original drivetrain, Window Sticker, Tank Sheet, interior, paint and GM Trim Tag validating the color combination.Under the hood is a factory-original 435hp engine and 4-speed close-ratio transmission, along with a factory-original side-exhaust. It is one of the most well-preserved, low mileage, unrestored 1967 427/435 coupes in existence.

To preview additional Chevrolet Corvettes consigned for the 2016 Barrett-Jackson 45th Anniversary Auction in Scottsdale, click here.  For more information on becoming a bidder, follow the link to www.barrett-jackson.com/bid.  Experience the 45th Anniversary Scottsdale Auction in style with a Barrett-Jackson VIP Experience Package. Information on available packages and how to be a part of this world-class lifestyle event is available here.

Established in 1971 and headquartered in Scottsdale, Arizona, Barrett-Jackson, The World’s Greatest Collector Car Auctions®, is the leader in collector car auctions and automotive lifestyle events. The company produces auctions in Scottsdale, Arizona; Palm Beach, Florida; at Mohegan Sun in Connecticut, and Las Vegas, Nevada. With broadcast partners, Velocity and Discovery Channel, Barrett-Jackson will feature live television coverage in 2016, including broadcasts in over 100 countries internationally.Barrett-Jackson also endorses a one-of-a-kind collector car insurance for collector vehicles and other valued belongings. For more information about Barrett-Jackson, visit http://www.barrett-jackson.com, or call 480-421-6694.