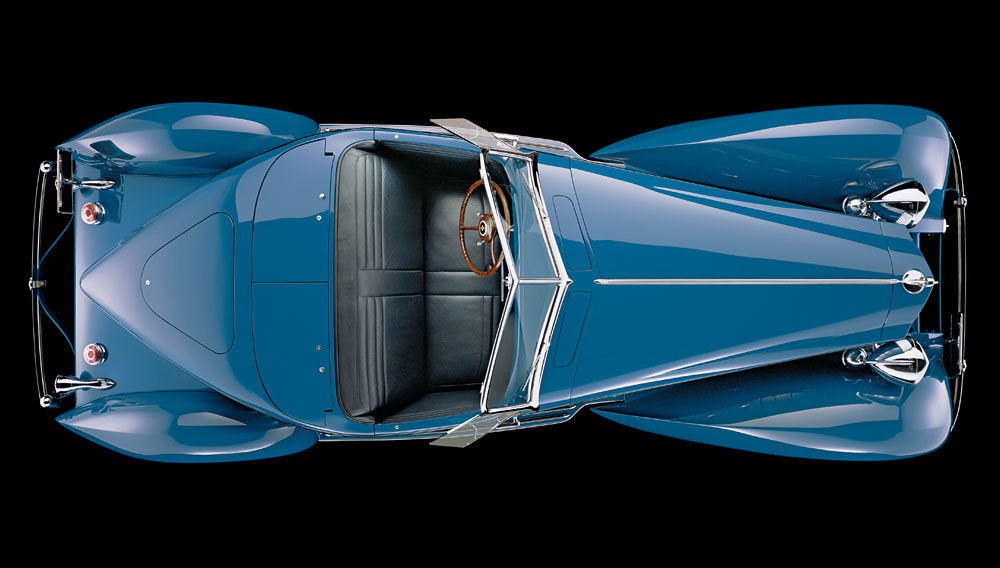 When a 1932 Packard Twin Six custom convertible sold for $1.1 million last summer during RM Auctions’ St. John’s sale in Michigan, the car’s provenance no doubt influenced its price as much as its rarity did. The Twin Six was one of only two examples that Packard built, and it was delivered new to Al Jolson, known then as “the world’s greatest entertainer.”

The Packards presented on these pages—the blue 1934 1106 Runabout Speedster and the red 1934 1108 Sport Phaeton—are nearly as rare as the million-dollar Twin Six. But unlike that car, at least one of them—the Run­about Speedster—has no celebrity connections to influence its value. The Speedster’s chain of custody is nonetheless impressive. It includes some of the country’s most prominent collectors: J. B. Nethercutt, William Harrah, Robert Lee, and William Lyon. The car now belongs to Lyon, who acquired it from Lee at an RM Auctions sale in 2006. Lyon’s winning bid was $3.19 million.

The provenance of the Sport Phaeton, a Pebble Beach First in Class winner in 2008, might include a celebrity on a par with Jolson. The original owner is said to have been Clark Gable, though that claim is not documented and not touted by its current owner: Jack Nethercutt, son of the late J. B. (Given the number of Packards and other luxury cars that the movie star owned, the claim certainly is plausible.) Regardless of whether it once belonged to Gable, the Phaeton later endured a far less charmed existence than the Speedster’s. It was abandoned by one owner, neglected by others, and eventually junked. But it survived thanks to the senior Nethercutt, a Packard enthusiast who, as noted, at one time also owned the Runabout Speedster.

Though the final models produced by Packard before the company ceased all production in 1956 were grotesquely redesigned Studebakers and garish giants, the cars that emerged in the 1930s from the company’s sprawling, Albert Kahn–designed factory in Detroit were glorious machines. The relatively common 8-cylinder models, as well as the top-of-the-line V-12s, known as the Twelve Series, represented a pinnacle in American automobile manufacture. At the tip of that peak were the Runabout Speedster and Sport Phaeton, both of which featured bodies by LeBaron.

Packard built only four Speedsters and five Phaetons. They exemplify the company’s engineering excellence and its determination and ability to cater to the wealthy few who could afford luxury cars during the Depression. In 1934, the Phaeton was priced at $7,820 and the Speedster cost $7,746. Though less than the price of a Cadillac V-16, which could top $8,500, those were hefty sums to anyone trying to scrape together $600 or less for a new Ford. Franklin D. Roosevelt was a Packard customer, as were a number of European aristocrats and members of Japan’s imperial house.

Packard did not churn out units the way that Ford did, nor did it create a minuscule number of bespoke rarities one at a time. The company employed a combination of assembly-line techniques and careful craftsmanship and offered plenty of personalization, allowing customers to order from a wide range of body styles through its catalog. The Runabout Speedster and Sport Phaeton were two of the 26 body styles available for the Twelve Series. For each model, Packard offered a choice of three chassis lengths. The cars’ engines displaced 7.4 liters and produced 160 hp.

Though it was operating in the red at the time, Packard was convinced that the market for high-priced automobiles would remain strong during the Depression, and so it retained two outside coachbuilders, Dietrich and LeBaron, to expand its in-house design team’s capabilities. Dietrich’s designs tended to be formal, while LeBaron’s were more sporting. Today, the latter command more attention from collectors.

The Runabout Speedster, built on a short (135-inch) wheelbase, features a radiator shell that was produced in quantity by Packard, but the rest of the bodywork is unique: the shell that is formed tightly around the two-seat passenger compartment, the tail that drops off sharply over the luggage compartment and forms a point, and the removable covers over the rear wheels that add to the car’s streamlined appearance. Though the Speedster’s bodywork bears the LeBaron name, credit for its general shape often is assigned to Packard design chief Ed Macauley, son of company president Alvan Macauley. He recently had created a similar design for his personal car, and it is now seen as the inspiration for the Speedster.

The resemblance between the Speedster and the longer (147-inch wheelbase) Sport Phaeton is obvious and intentional. The front portions of both cars are virtually identical; from radiator shell to cowl, they share the same panels (all made of aluminum). But behind the front seats the Phaeton has a second passenger compartment, with its own windshield, and a deck lid that descends even more steeply than does the Speedster’s.

Packard delivered the Speedster from the factory to a buyer in Washington, D.C., who owned it for only a short time before selling it to George Hormel, founder of Hormel Foods in Wisconsin. Hormel, who died in 1946, passed the car on to his son Jay, who in turn bequeathed it to his son, George A. Hormel II, better known as “Geordie.” Not interested in one day running the company that made Spam, Geordie moved to Los Angeles and entered the music industry, writing television themes (Lassie, Ozzie and Harriet) and later building and operating a successful recording studio. In 1961, Hormel sold the Speedster, three other Packards, and 2,700 pounds of Packard parts for $23,000 to J. B. Nethercutt, a fellow Southern Californian, who had made his fortune by cofounding a cosmetics company.

Before his death in 2004 at age 91, Nethercutt assembled a collection of nearly 250 cars, which are displayed at the Nethercutt Collection and Museum in Sylmar, Calif. Over the years, Nethercutt cars have earned six Pebble Beach Best of Show prizes.

Nethercutt kept the Speedster until the mid-1970s, when he sold it to William Harrah, founder of the casino business that bears his name. Harrah died in 1978, and two years later the Holiday Inn Corp. acquired his company, the Speedster, and the 1,800 other cars in his collection. Holiday Inn sold the collection through a series of auctions in the mid-1980s. During one of these sales, Lyon, who founded a home-building company in Newport Beach, Calif., purchased 82 cars from the Harrah collection, including the Speedster for $710,000—an astronomical price at the time.

Lyon commissioned a full restoration before selling the car in 1994 to Lee, a Reno, Nev.–based entrepreneur who has been displaying cars annually at Pebble Beach since 1986. His collection includes a 1956 Ferrari 250 GT Boano convertible that he bought from Enzo Ferrari and a 1937 Horch 853 Voll & Ruhrbeck Sport Cabriolet that was the Pebble Beach Best of Show winner in 2009. Evidently, Lyon experienced seller’s remorse, because he reacquired the car from Lee at a 2006 auction, paying about four and a half times the price he had paid for it two decades earlier.

The Phaeton’s history is more typical of what befell so many classic automobiles from the 1930s. Sometime early in its existence, the Phaeton broke down in the wilds of Utah. Its owner—not Gable—had it towed to a garage for repairs and then abandoned it. After being neglected by four subsequent owners and enduring a failed restoration, the Phaeton was junked. The car eventually was scooped up by a Packard enthusiast in Wisconsin, which is where J. B. Nethercutt located it. He sent his on-staff Packard expert to investigate, but the car was in such derelict condition that the expert initially walked right past it.

Nethercutt nevertheless bought the Phaeton and had his shop restore it in 1966. In the 1990s the Phaeton underwent a more comprehensive rebuild that took nearly eight years. In 2008 the effort was rewarded with the Pebble Beach honor.

Magnificent as the Speedster and Phaeton may be, neither they nor the rest of the Packard Twelves could stem the rising tide of red ink that was engulfing the company. In addition to the Depression, the company had to contend with advancing technology, which was enabling other automakers to mass-produce cars that offered levels of comfort, style, and performance comparable to those of the Twelve Series. Packard responded by staking its future on the One Twenty, a new car that could be produced in quantity but would still provide most of the attributes of the classic Packards.

When it debuted in January 1936, the One Twenty had a base price of $980 for the coupe version and $1,395 for the convertible sedan. The response to the car was positive enough for Packard to produce 55,000 examples that first year (compared to a total of about 8,000 for all of its models in 1934). The One Twenty’s arrival marked a new beginning for Packard and gave it a platform that enabled the company to survive for two more decades. It also signaled the imminent end of the Twelve Series.

The last Packard Twelve rolled out of the factory in August 1939. The end of the line was not unexpected; the Depression was ending, and so the days of the opulent Packards, exemplified by the LeBaron Speedster and Phaeton, had passed. But those cars remain the brand’s crowning achievements.