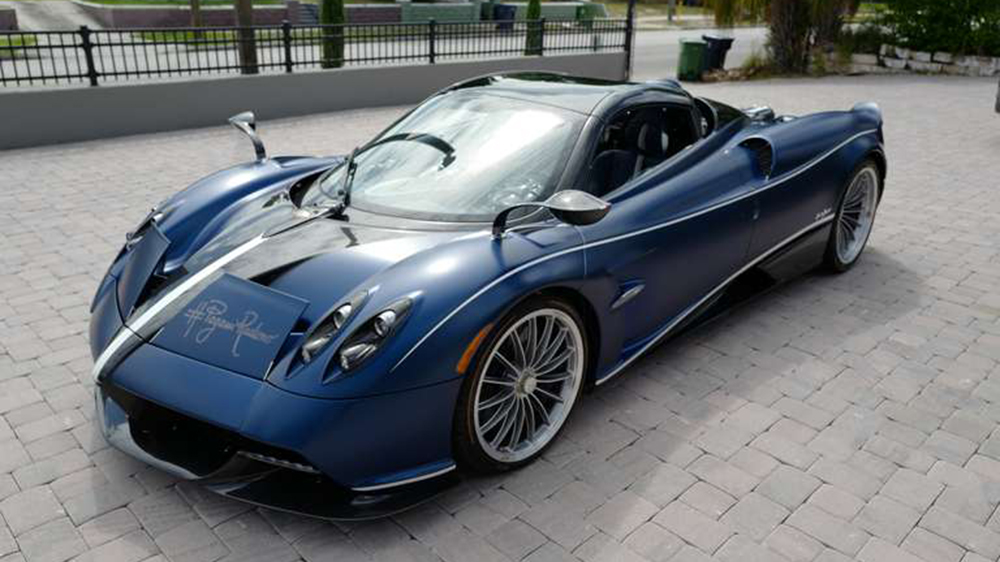 Even in the over-the-top pantheon of supercars, Paganis are special. The Italian automaker’s flamboyant, low-volume vehicles are all built to order, making each one a fully personalized automotive wonder. And even among these, only a select few are chosen for display at the world’s biggest auto shows.

Later this week, a Huayra Roadster the boutique marque showcased at the 2019 Geneva International Motor Show is scheduled to go up for auction, according to DuPont Registry. Each of the open-top supercars is a technological marvel, but this particular example was built with the intention of showing off full the extent of its capabilities, with an exterior that opens up like wings to reveal the machine’s impressive innards.

This Huayra Roadster hails from the early part of the vehicle’s 100-car production run, though its specific number is unclear. Regardless, it’s a true beauty. The convertible’s curvaceous shape is finished in matte blue topped with a white racing stripe, matching pin stripes along the sides and striking exposed carbon-fiber accents. The supercar is also remarkably strong. That’s because the body is made from Carbotanium, a type of carbon fiber in which each strand of carbon is reinforced by titanium.

Inside, you’ll find a chrome-heavy interior that looks like something out of an old science fiction movie. Yes, it’s outlandish, but it also feels right at home in a car like the Huayra Roadster. Coated in Italian leather, it features the same blue and white color scheme as the exterior, along with plenty of exposed carbon-fiber accents. In addition to a prominent gauge cluster behind the steering wheel, there’s also a sizable infotainment system located in the center of the dashboard, which will allow you to monitor your trip and select entertainment options. The car comes outfitted with every Pagani accessory, including several dedicated cargo compartments and matching luggage.

Before starting Pagani, founder Horacio Pagani was Lamborghini’s chief engineer, so he knows there’s more to a supercar than looks. And sure enough, the Huayra Roadster’s performance specs are no less impressive. This is due in large part to a a twin-turbocharged V-12 engine that was hand-built by AMG. Mated to a dual clutch transmission, it’s capable of churning out a beastly 791 horses and 775 ft lbs of torque.

The show-worthy Huayra Roadster is scheduled to go up for bid as part of a receivership auction in Tampa Bay on Thursday morning. Bidding for the car will open at $1.85 million, which is actually more than $500,000 less than its original price. That would be quite a bargain for a car like this, especially considering it has just 900 miles on it. Of course, we would expect the final hammer price to be much higher.