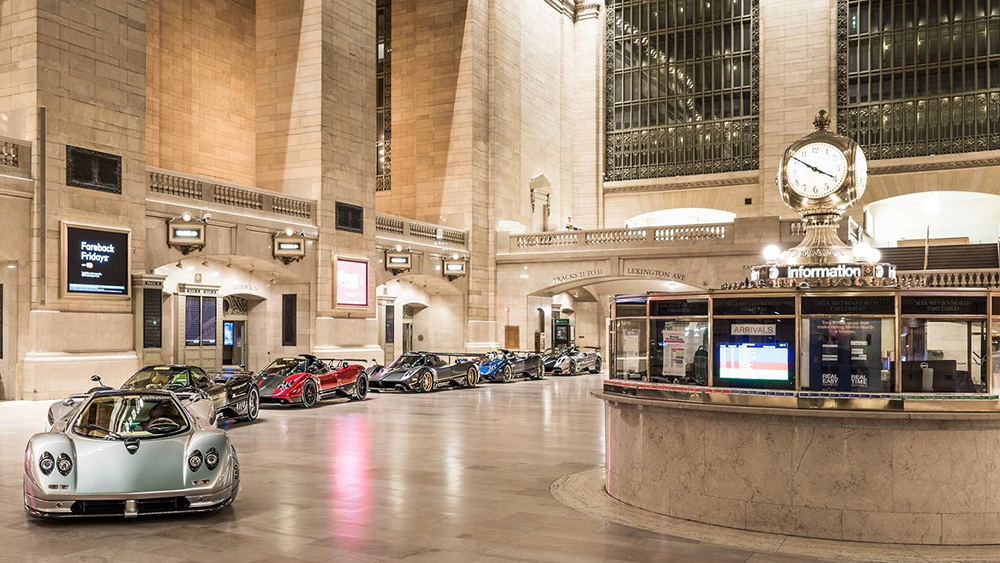 New York City commuters will be treated to some serious eye candy this week, as a handful of multimillion-dollar Pagani hypercars take pole position at Grand Central Terminal. In celebration of the marque’s 20th anniversary, six sets of wheels from the Zonda collection will be on display to the 750,000 people passing through the terminal each day.

Horacio Pagani debuted his first-ever hypercar back in 1999. The groundbreaking Zonda quickly became a benchmark for speed machines across the globe, though it was never sold stateside. Hence, having this prestigious lineup in the heart of New York is quite a momentous occasion.

“We performed an extensive search of the country’s most iconic venues to find one that represented the same spirit of engineering, ingenuity and passion that went into the first 20 years of the Zonda,” said Michael Staskin, CEO of Pagani Automobili America. “What we found was Grand Central Terminal, a globally recognized hub of transportation, iconic history, timeless design and passion in one of the world’s greatest cities New York.”

The cars, of course, look right at home beneath the sparkling chandeliers of Vanderbilt Hall. Robb Report took a quick afternoon field trip to see which Italian stallions were worth missing a train for. You’re welcome.

First on the list, the Zonda 001. It’s the first-ever Pagani production car and showcases the meticulous artisanal work for which the marque is renowned.

Next up, the Huayra Roadster BC. You may have come across the show-stopping $3.4 million convertible in the mobile game CSR Racing 2, well, now you can finally see it in the flesh. The turbocharged V12 is capable of outputting a staggering 791 hp but is just as impressive handbrake on.

Finally, the Zonda HP Barchetta: Designed by and for Horacio Pagani himself, this cobalt beauty was inspired by the great “Barchetta” style racecars of the ‘50s. It has an iconic high-strength chassis and a rear end that belongs on your Instagram. But, really, all the cars with the display—which boast a collective price tag of $27 million—are worth checking out.

The Zonda Collection can be viewed by members of the public visiting or passing through Vanderbilt Hall from now until November 8. Enjoy.