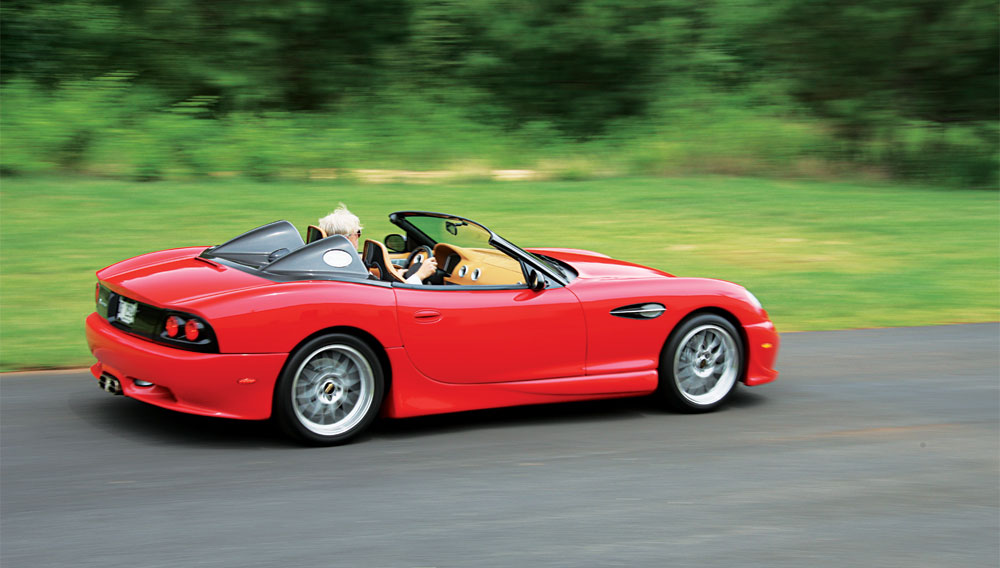 Don Panoz is one of the more renowned figures in U.S. automobile racing. Among other accomplishments, his companies have created the American Le Mans Series; built racecars that won the Indy 500, the 24 Hours of Le Mans, and the 12 Hours of Sebring (on one of three tracks he owned); and developed the DeltaWing racer, which features an aerodynamic, lightweight, and fuel-efficient design that is being adapted for road cars.

His is an impressive résumé, especially considering that, according to company lore, he became involved with motor­sports initially only to help his son, Daniel, promote the boutique road-car brand the younger Panoz had started a few years earlier. That brand (based in Braselton, Ga., not far from the family’s Château Élan Winery & Resort), originally called Panoz Auto Development and now just Panoz, is celebrating its 25th anniversary this year and marking the occasion with the release of a special-edition Esperante Spyder.

Like the original Esperante, which debuted in 2001, the 25th Anniversary Edition Esperante Spyder is a lightweight roadster with a big engine. The car’s starting price is about $179,000. Between it and the wider-body Esperante Spyder GT, which will have a starting price of about $204,000, Panoz plans to build a total of only 25 examples.

At just 3,128 pounds, the Esperante Spyder has a power-to-weight ratio that ranges from excellent to outrageous, depending on the choice of engine. The standard naturally aspirated V-8, with an aluminum block and heads, develops 430 hp. A 560 hp supercharged version is one option; another is an 800-plus hp engine custom-built by Élan Power Products, a division of Élan Technologies, one of the Panoz affiliates founded by Don Panoz. The engines will be paired with a heavy-duty Tremec 6-speed manual transmission or an optional automatic transmission with paddle shifters.

With an aluminum body that displays an abundance of soft curves and an absence of sharp creases, the Esperante Spyder resembles a big-boned, long, and low-slung Miata. The front fascia has been revised for the anniversary edition so that it is more aggressive looking, and the new rear end sports a center exhaust port and a blacked-out taillight section.

The cockpit has also been revised for the anniversary model and now features a shorter windshield and a new dashboard, in which the electronic gauge cluster is positioned in front of the driver instead of in the center. The leather-lined interior can be appointed with Alcantara, wood, or carbon-fiber trim.

The original Esperante was the third model released by Panoz. The first was the Roadster, which debuted in 1992, three years after Daniel Panoz established his company. The Roadster was based on a chassis from Thompson Motor Company, a small automaker in Ireland. Panoz, who grew up in Ireland, was hoping to work for Thompson, but it went out of business before he could secure a job. One company’s failure prompted another’s founding, as Panoz purchased one of Thompson’s chassis, brought it back to Georgia, and used it to develop the Roadster.

Five years after the Roadster’s release, Don Panoz, who had started and sold two pharmaceutical companies—the first in West Virginia and the second in Ireland—before opening the winery and resort near Atlanta, established the Panoz Motor Sports Group to promote his son’s car brand and to develop technology that could be used by the Panoz road cars. Since then, Panoz has become a household name among motorsports fans—and among aficionados of hand-built, high-powered, and highly exclusive sports cars.