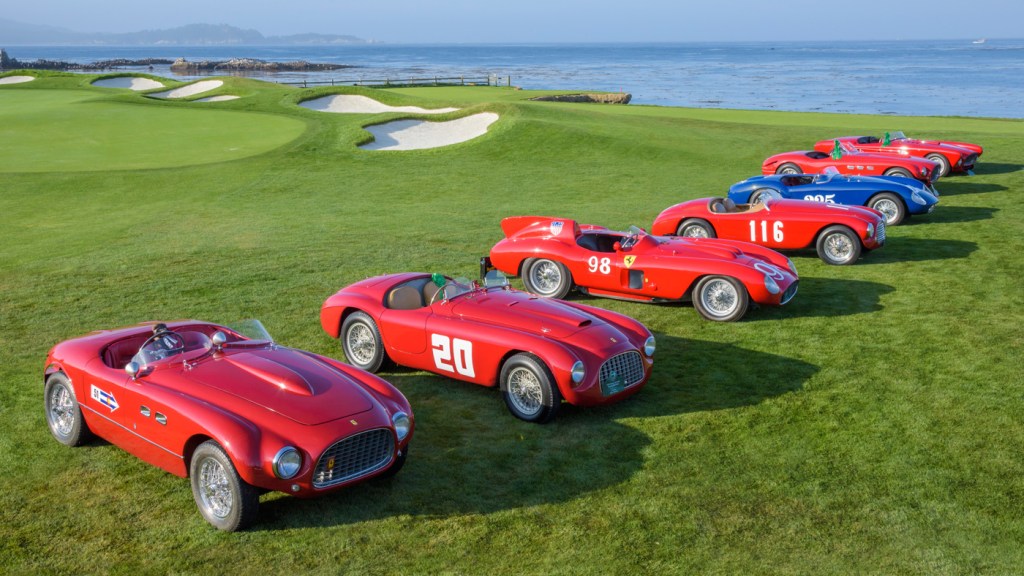 Monterey Car Week in Monterey, Calif., will culminate with a fairway full of classic cars at the famed Pebble Beach Concours d’Elegance on Sunday, Aug. 20. Since its birth in 1950, the Pebble Beach Concours has been considered one of the world’s most prestigious automotive events. Participants must be invited by organizers who take into account certain criteria, including a vehicle’s rarity, condition, and historical significance.

This year’s highlights include four classes of Ferrari in celebration of the automaker’s 70th anniversary, when major race winners and one-off spéciales will grace the 18th fairway. Nearby, Ferrari of North America will set up its own concours on the first fairway on Saturday, Aug. 19 (open to the public). Ferrari has a special history with California; the state was home to the first Prancing Horse imported to the United States—a 166 MM Touring Barchetta, brought over in 1948. Two years later, Ferraris were among the contenders in the first Pebble Beach Road Races and went on to dominate nearly every subsequent race.

Also making appearances at this year’s Concours are American Dream Cars of the 1960s as well as three classes dedicated to Isotta Fraschini, an Italian marque founded by Cesare Isotta and brothers Vincenzo, Antonio, and Oreste Fraschini in Milan in 1900. Isotta Fraschinis were driven by early film stars and appeared in Hollywood movies, including Sunset Boulevard.

A plethora of events lead up to Sunday’s concours, including the Tour d’Elegance on Thursday, Aug. 17, which will give spectators the opportunity to view many of the Pebble Beach Concours contenders in motion on historic Highway 1. A series of lectures by renowned automotive experts will take place Aug. 17 through 19, including a question-and-answer session with car collector and comedian Jerry Seinfeld. In addition, there will be panel discussions about renowned racer Phil Hill, the legendary La Carrera Panamericana race, the future of autonomous driving, and the history of hot rods.

Tickets to the 2017 Pebble Beach Concours d’Elegance are available at pebblebeachconcours.net.