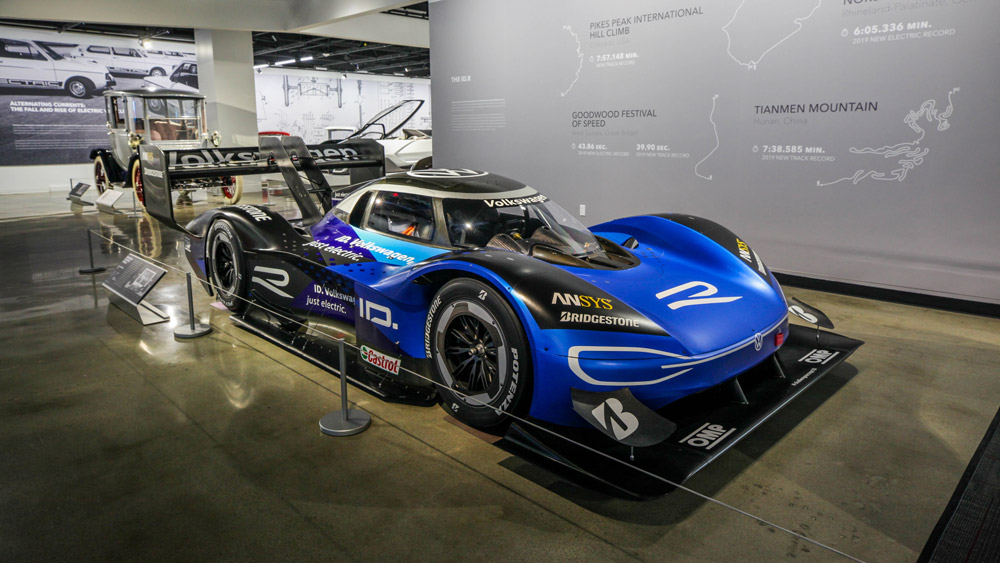 In 2008, Tesla unveiled its first all-electric roadster, which promptly revolutionized the plug-in vehicle industry. In that moment, automotive enthusiasts around the world discovered that an electric car could be thrilling, both in appearance and performance. Since then, however, the electric automobile market has delivered few—if any—exciting debuts that have felt rooted in reality. That may have changed when the Petersen Automotive Museum opened its recent exhibition, Building an Electric Future.

The all-electric 2018 Volkswagen ID.R, which set a new overall record at the Pikes Peak Hill Climb.  Photo: Courtesy of the Petersen Automotive Museum.

Spanning five rooms, the presentation showcases Volkswagen’s endeavors to claim the title of world’s foremost producer of electric vehicles. The marque’s all-electric 2018 ID.R race car is an example of this, having set a new overall record at the Pikes Peak Hill Climb. In particular, the exposition centers around the German auto manufacturer’s modular electric vehicle platform (known as MEB), and highlights the platform’s flexible nature, explaining how it is engineered, the variety of vehicle models that can be built upon it, and how those vehicles will be assembled.

The latter topic is achieved through the use of virtual reality headsets, which allow visitors to take a glimpse inside the Volkswagen factory. “That’s not something that many people get an opportunity to do, to see the robotics involved and see the scale of it,” says Bryan Stevens, the museum’s exhibitions and creative director. “It’s very impressive.”

Visitors can take a tour of the Volkswagen factory through virtual reality headsets.  Photo: Courtesy of the Petersen Automotive Museum.

In total, six vehicles are included in the exhibit, including an original transporter VW bus from the 1950s and “Old Red,” the first Meyers Manx dune buggy, which emphasize Volkswagen’s historic and cultural significance, particularly in California.

An original transporter VW bus from the 1950s.  Photo: Courtesy of the Petersen Automotive Museum.

The headlining vehicle, however, is a new concept car, the ID. Vizzion. It’s one that Stevens assures hasn’t been seen anywhere in the world prior to the Petersen. The car provides an honest preview of what the world comprised entirely of electric-powered vehicles might look like.

“Only now do I feel that the snowball is rolling down the hill,” Stevens says of the movement to legitimize electric automobiles, which begins with practical cars like the Volkswagen concept that is on display. “This is the first glimpse of what will very likely be the future. These aren’t just concepts that might be produced decades down the road; at least one of them is a car that will be produced now. It’s a real future, it’s no longer a fantasy. Everything that’s being depicted is actually happening.” The exhibit will be open through September, 2022.