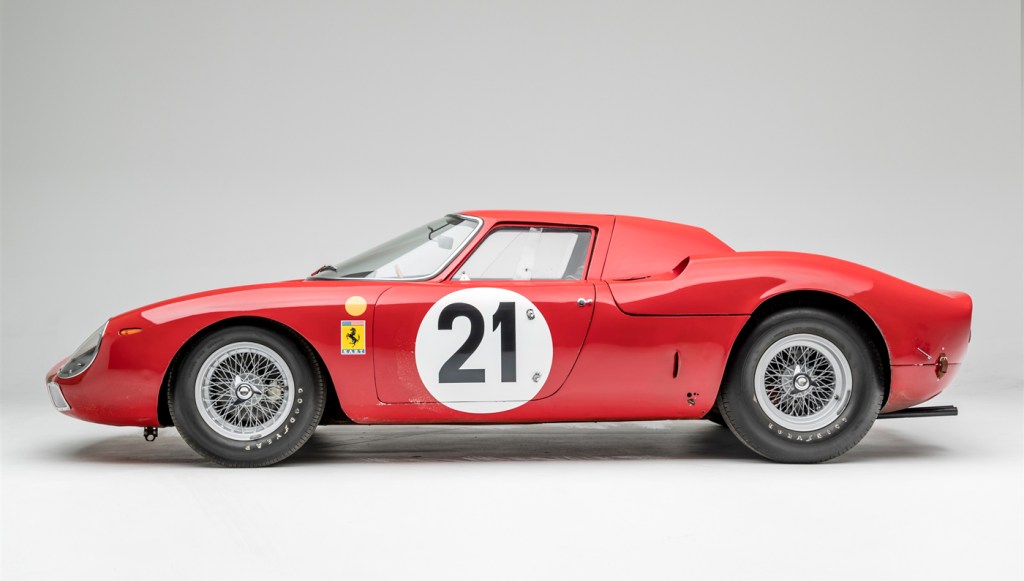 “The dream became bigger, much bigger, to build a car that doesn’t slow in the curves, that flies without leaving the ground…”—Enzo Ferrari

In 1947, the same year the sound barrier was first broken by aircraft, Italian racer and automaker Enzo Ferrari began launching road rockets with the Prancing Horse livery and, in true Ferrari fashion, never looked back. In short order, his marque’s reputation for pairing beastly power with unbridled beauty was rarified. It’s this subsequent legacy that is the subject of Seeing Red: 70 Years of Ferrari, the latest presentation at the Petersen Automotive Museum in Los Angeles.

Sponsored by Rolex and opening tomorrow to the public, the exhibition is housed in the museum’s Bruce Meyer Family Gallery and features 15 of Ferrari’s finest, including a 250 GTO, a 166MM, a 250 LM, and a 248 F1—all colored in signature Rosso Corsa.

“Ferraris have a mystique about them that is so alluring and captivating—they’re winners, and people always love to be associated with winners,” says Bruce Meyer, the Petersen’s founding chairman and member of its board of directors. “And there’s no better color to celebrate Ferrari than red.”

As far as podium performances, one car in the gallery is responsible for putting the marque on the motorsports map, the 166 Mille Miglia (MM) Barchetta from 1949 (pictured above). That year, Luigi Chinetti and Lord Selsdon piloted the racer to Ferrari’s first win at the 24 Hours of Le Mans, an accomplishment the automaker has repeated eight more times to date. The 140 hp vehicle is dressed in a body by Carrozzeria Touring, carries a 2-liter Colombo V-12 engine, and is capable of reaching up to 130 mph. One of only two constructed, the roadster is part of the Robert M. Lee collection and is on loan from the late automobile aficionado’s wife Anne.

Another example to see victory lane is a 1965 250 LM from the collection of the Indianapolis Motor Speedway. The year it was built, the mid-engine machine—with a 320 hp, 3.3-liter V-12—took the checkered flag at Le Mans while driven by Jochen Rindt and Masten Gregory of Ferrari’s North American Racing Team (NART). The 250 variant, with a top speed of 183 mph, continues to climb in value. In 2013, one from 1964 sold through RM Sotheby’s for $14.3 million, making it among the 10 most expensive Ferraris to sell at auction.

One of Meyer’s personal favorites will also be on hand—a 1963 250 Gran Turismo Omologato (GTO) currently owned by his good friend William “Chip” Connor. “That car resonates with me the most because I’ve had considerable time behind the wheel,” explains Meyer. “I have done rallies with Chip in it and have driven the car on the racetrack.”

The 250 GTO (pictured above), designed by Ferrari’s Giotto Bizzarrini and Mauro Forghieri of Carrozzeria Scaglietti, had a three-year production run of only 39 examples and has become one of the models most coveted by collectors. Introduced to the market at a price of roughly $18,000 in the early Sixties, the 300 hp car’s appreciation has accelerated exponentially, with another from 1963 selling for a staggering $52 million in 2013.

But not all of the selections are from the last century. Competing for attention will be a second vehicle from Connor’s collection, the Ferrari 248 F1 (pictured below) driven by Michael Schumacher during his final Formula 1 season in 2006. Schumacher steered the 785 hp model—equipped with a 2.4-liter V-8 engine—to seven first-place finishes that year, including the Italian Grand Prix.

Assembling such incredible cars under one roof came to fruition through the efforts of Meyer and the generosity of his close associates who, like himself, have an extensive number of high-value vehicles and are passionate about sharing their art with others.

“When you look at the lineup of donors who are supporting this exhibit, the likes of Chip Connor, Rob Walton, Charles Nearburg, Anne Lee, Steven Reed, and Les Wexner—it’s epic,” says Meyer.

The celebration kicked off last night with a reception at the Petersen. Part of the evening’s program paid honor to Ferrari’s famed racer Phil Hill, the first driver born in the United States to win at Le Mans and the only one, so far, to capture the Formula 1 World Drivers’ Championship. Taking the stage for the posthumous tribute was his son Derek who shared a personal moment of riding as a passenger when his father took one of his Le Mans–winning racecars out on the track for the last time.

The Seeing Red: 70 Years of Ferrari exhibit is planned to be featured through April of 2018. (petersen.org)