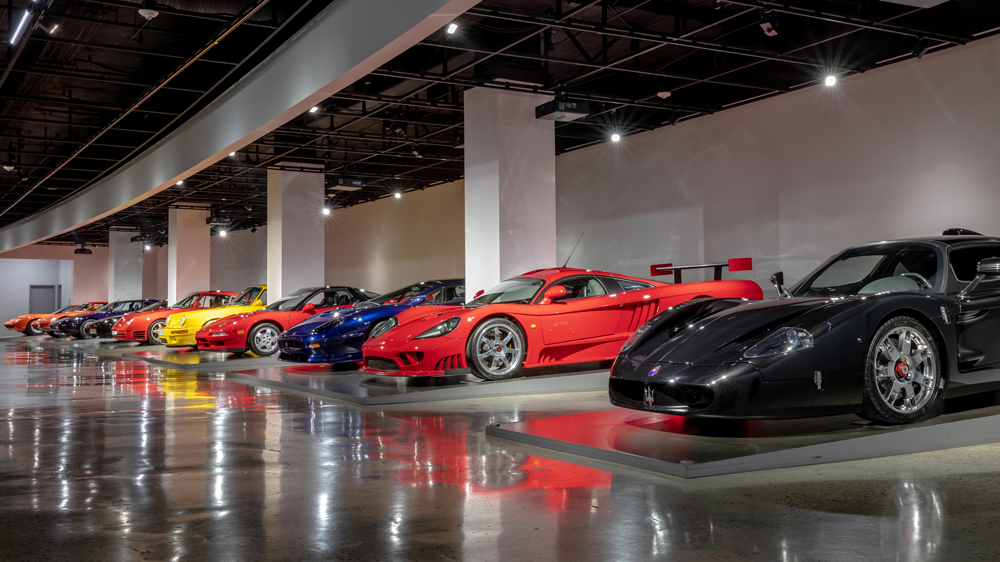 Photo by Ted7, courtesy of the Petersen Automotive Museum.

Although the Petersen Automotive Museum in Los Angeles remains closed to the public, the staff have not been idle while waiting for the county to resume operations. Ready to wow guests upon their return: a retrospective on horsepower and innovation titled “Supercars: A Century of Spectacle and Speed.” The collection, comprising roughly 30 vehicles made from 1913 through 2005, was curated by Bryan Stevens, the Petersen Museum’s director of exhibitions. While giving Robb Report a private (and socially distanced) tour, he discussed the inspiration and challenges unique to the presentation.

“It wasn’t an exhibit on our calendar but, after the virus situation, we wanted to reopen with a bang, with something that was really enticing,” Stevens said. “This exhibit came together much faster than most, going from the initial idea to having all the cars in place in less than three months. But given the financial implications of the museum’s long-term closure due to Covid-19, one of the bigger challenges was keeping costs to an absolute minimum.”

The team sourced most of the examples locally (though being headquartered in the car mecca of southern California made that task considerably easier). But several examples came from other parts of the country and completely at owner expense, including insurance, which makes the field all the more remarkable and gives proof to the Petersen’s value to car collectors and enthusiasts alike.

The supercar assemblage is set on the museum’s third floor, fronted by a 1988 Lamborghini Countach 5000QV, a model that celebrates form above function and exemplifies the criteria required to meet the Petersen’s selection process.

“While the term is subject to much debate, we generally define ‘supercars’ as road-going vehicles that are among the most superlative and extroverted of their respective eras,” Stevens says. “More specifically, supercars always must have some readily apparent—and never subtle—combination of extreme styling, power, performance, impracticality and exclusivity due to high cost and low production. The cars in this exhibit all share these characteristics, regardless of when they were built.”

A 1988 Lamborghini Countach 5000QV, which has become a temporary resident of the museum’s third floor.  Photo by Ted7, courtesy of the Petersen Automotive Museum.

The 1913 Mercer Type 35-J Raceabout on display.  Photo by Ted7, courtesy of the Petersen Automotive Museum.

Close to the Mercer sits a 1938 Delahaye Type 145 Coupe belonging to Petersen board member Peter Mullin. One of four chassis commissioned to compete in France’s Prix du Million race, it was later bodied by Henri Chapron. The art-deco mantle covers a 184 hp, 4.5-liter V-12 that allows for a top speed of 120 mph.

Anchoring the middle of the display floor is a winning trifecta if ever there was one—a Jaguar, Ferrari and Shelby Cobra that helped define the design DNA of the automobile’s golden age in the 1950s and ‘60s. The 1956 Jaguar XKSS, famously owned by actor Steve McQueen, is not only one of the most renowned cars in the museum but, surprisingly, one that gets exercised on promotional drives more than most any other at the Petersen. Based off the marque’s D-Type, it’s among only 16 examples that survived a factory fire in 1957.

The 1956 Jaguar XKSS which once belonged to actor Steve McQueen.  Photo by Ted7, courtesy of the Petersen Automotive Museum.

Adjacent to McQueen’s Jag is a rare and important Prancing Horse, a 1959 Ferrari 250 GT Long Wheelbase (LWB) Berlinetta. One of only seven built, it’s an interim example developed to showcase the aerodynamic direction Ferrari planned to take with its upcoming competition cars, and was the successor to the 250 GT Tour de France.

Rounding out the trio is a 1967 AC Shelby Cobra 427. Its placard refers to Cobras as “the fastest American automobiles of their time” and no wonder, as it carries a 427-cubic inch V-8 with 360 hp and the ability to propel the roadster to 160 mph. Although replicas abound, this is one of the 260 originals. Even more impressive: its glovebox bears Carroll Shelby’s handwritten signature and a message to the car’s current steward, racer Tomy Drissi.

At the back wall, almost a dozen more vehicles continue the timeline, starting with a favorite of Stevens: a 1968 Lamborghini Miura P400. “It’s not the fastest, or the most valuable, or the most dramatic looking, but it’s the icon—the car that really cemented the modern two-seat mid-engine supercar paradigm,” he says. “I love the idea of incredible performance coming from such a trim, jewel-like package. The profile, to me, is automotive perfection.”

My personal highlight was the opportunity to stand inches from a 1998 McLaren F1 “LM-Specification” in immaculate condition. The Gordon Murray–designed masterwork is one of only two original F1 examples given “Le Mans” modifications by McLaren to bolster aerodynamic performance. Wearing papaya orange as a tribute to Bruce McLaren’s racing livery, the 680 hp showstopper has a top speed of 225 mph.

The 1998 McLaren F1 “LM-Specification” on loan to the Petersen.  Photo by Ted7, courtesy of the Petersen Automotive Museum.

While the F1 is still considered by many connoisseurs to be the benchmark of automotive aesthetics and performance, it’s a 2005 Maserati MC12 that bookends the exhibition. Built to be campaigned in the FIA’s GT category of racing, the 630 hp Maserati—of which only 55 were produced—shares Ferrari’s platform for the Enzo. 50 models were street-legal cars sold to the public; the example present was made for, and given to, motorsport great Michael Schumacher, who helped test the MC12 during its development.

The 2005 Maserati MC12 made for F1 icon Michael Schumacher.  Photo by Ted7, courtesy of the Petersen Automotive Museum.

According to Stevens, the decision to end the exhibition with the MC12—and not include more recent exotics—was simple. “We are essentially identifying the Bugatti Veyron as the start of a new era, the hypercar era,” he says. “Bugatti was the first to really go with the numerics of 1,001 hp, more than a million dollars, 250+ mph and 16 cylinders. It was a level above everything else. Even Bugatti has acknowledged it deliberately went with those numbers to create a new category. So, if everything works out, we plan to follow up with a hypercar exhibit starting in the spring.”

The goal is for the two exhibitions to eventually run concurrently, providing unprecedented access to history’s apex cars. But in these unprecedented times, the Petersen must wait for the city to give its green light.