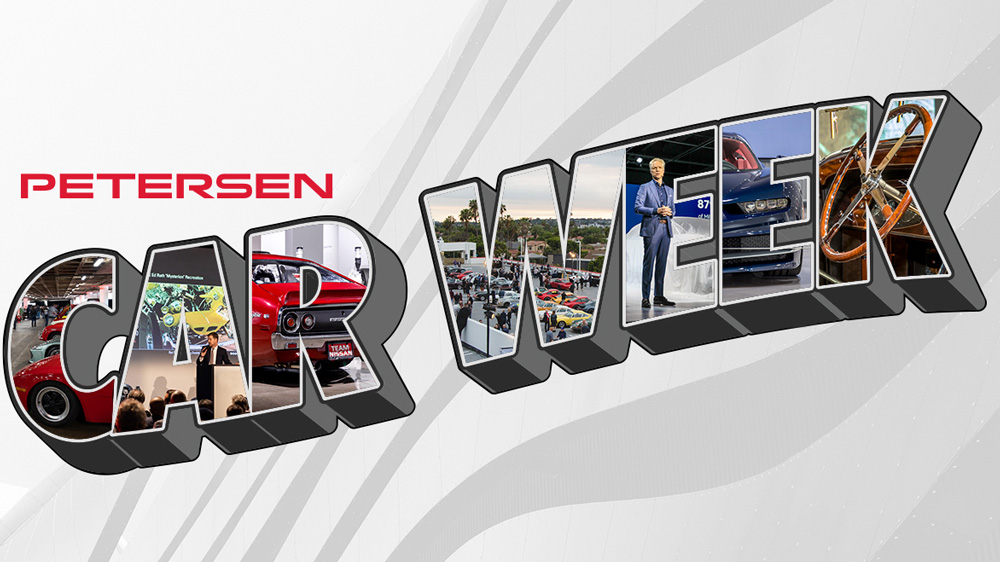 Every August, car aficionados from around the world flock to Northern California for what is largely considered the most extravagant and prestigious automotive gathering on the planet, Monterey Car Week.

But the entire series of events, including the various concours, historic races and elite auctions are all cancelled this year due to the coronavirus pandemic. But don’t despair. The Petersen Automotive Museum, in Los Angeles, is making plans to host a virtual car week from August 12 to 16, featuring a mix of live new-vehicle debuts, online auctions and even more than one concours.

“We’re not trying to scoop or replace Monterey Car Week in any way, we’re just trying to keep the enthusiasm going,” says car collector Bruce Meyer, who also is a founding member of the Petersen, one of the world’s leading museums dedicated to car history and appreciation.

Even before the global pandemic, the Petersen had been sharing more of its cars and events online. But with the nation’s self-quarantine severely limiting the ability of car fans to gather, the museum posted a virtual “cars and coffee” to YouTube on April 26. It featured short video submissions from automobile owners from across the globe. Its success gave fuel to the notion of August’s online events.

Petersen officials say a number of yet-to-be-announced partners are being locked in for what’s being called Petersen Car Week, including some auction houses, a range of car clubs, some manufacturers and a number of top concours judges.

“We want to have a full spectrum of cars since our mission, as always, is to open up this hobby to the whole world,” says Michael Bodell, deputy director of the Petersen. The original mission and museum itself was the brainchild of late car-magazine pioneer Bob Petersen and his wife Margie.

“What makes the real car week so special is the huge range of events, so if your car club had planned a meeting in Monterey, reach out to us and let’s talk,” says Bodell. “Pebble Beach is all about car spotting. So, with our virtual car week, we want to have everything from modified BMWs to multi-million-dollar prize-winning Ferraris.”

A few Ferraris in the Petersen’s stable.  Photo: Courtesy of the Petersen Automotive Museum.

At present, the online lineup of events includes a series of videos airing August 1 through 10 called “The Road to Petersen Car Week,” which explore the rigors of getting a prized automobile ready for a top-flight concours.

On August 12, there will be a kick-off show; on August 13, a virtual tour d’elegance, live auction and new vehicle unveiling; on August 14, a special Porsche show, auction and vehicle spotlight; on August 15, virtual vintage racing and a hypercar show and auction. Finally, on Sunday, August 16, a concept car show as well as the Petersen Concours d’Elegance. Details about each individual event will be released on May 15.

While nothing can quite replicate the experience of being on the Monterey Peninsula in August with a sea of car lovers, the Petersen’s virtual tribute aims to be the next best alternative.

“All of us here are going to miss the real thing as much as anyone, from the fabulous dinners and events to the incredible cars on the greens of Pebble Beach golf course,” says Meyer. “But this is also such a great opportunity to move this great museum to another level of global online outreach.”