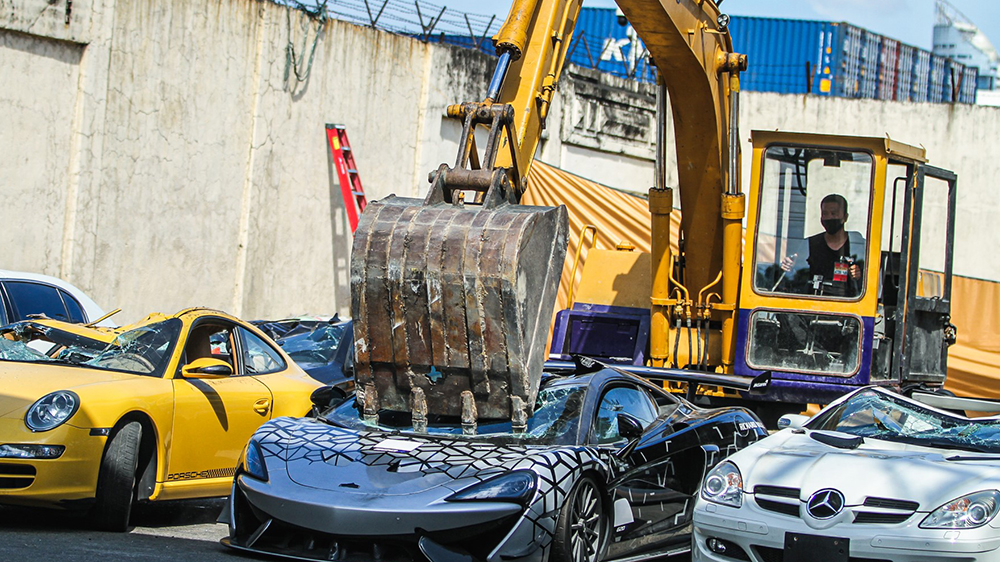 The Philippines isn’t messing around when it comes to car smuggling. So much so that it’s willing to destroy some very special vehicles to prove a point.

Last Friday, the country’s Bureau of Customs destroyed $1.2 million in luxury cars, including a McLaren 620R, according to an official Facebook post. The reason? Each of the vehicles was caught being illegally imported into the country over the last few years.

In total, 21 vehicles were destroyed. The crushing, which is the second carried out by the agency this year, took place in two locations—Manila and Cagayan de Oro. The vehicles had been illegally shipped into the country by different consignees and were seized between 2018 and 2020. Among them were a Bentley, a Mercedes-Benz, Lotus, a Porsche 911 C2S and, most heartbreaking of all, a brand-new McLaren 620R.

The street-legal version of the marque’s 570S GTR racer is powered by a twin-turbocharged DHOC V-8 capable of generating 611 horsepower. It can launch from zero to 60 mph in 2.7 second and hit a top speed of 200 mph. Making the destruction even more painful, McLaren will only build 350 examples of the $275,250 speed machine.

“The condemnation of the vehicles is pursuant to Presidential Directive 2017-447, in which President Rodrigo Roa Duterte reiterated the need to destroy smuggled vehicles to send the strong message that the government is serious in its efforts against smuggling,” the bureau wrote in the post.

The cars after they were crushed  Bureau of Customs PH/Facebook

This isn’t the largest example of vehicular carnage that has been undertaken since Duterte took office in 2016. In 2018, he had over $8 million worth of vehicles destroyed, according to Road & Track. The public destruction included 68 cars and eight motorcycles, all of which had been smuggled into the country. That lot included several Porsche 911s, Mercedes-Benz SLKs, Nissan Zs, a Ford Mustang, BMW M5 and a Lamborghini Gallardo.