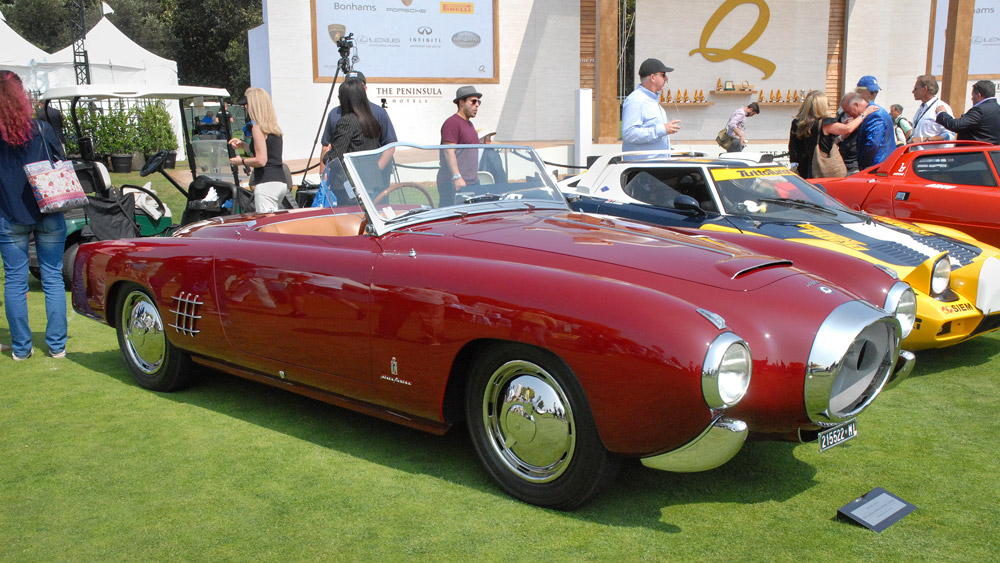 Nobody I know has spent more time behind a camera photographing great cars than Photodesign Studios’ Scott Williamson. Not only is Williamson the longest-running photo contributor to Robb Report, he’s a world-renowned master of the shutter. His images have appeared in publications, museums, and private collections around the world. Williamson recognizes that it’s the details of a car—and a photograph—that distinguish the merely good from the truly great. And like the best car designers themselves, he’s able to capture the subtlest of subtle nuances that define the words most important automobiles.

Call it an “eye” or a “feeling”—whatever the word—it comes with years of not just looking, but seeing. It’s about observing the subject firsthand, in the quiet privacy of a darkened studio where car and photographer have a silent dialog, long before the photographer uncaps the camera’s lens. Williamson seeks perfection – not just in the cars he shoots, but in the technique that he uses to shoot them. Years after most professionals jettisoned large-format cameras and film, Williamson maintained a relationship with Fuji and his Southern California processing lab to maintain standards that are only just now being equaled—and just—by the digital medium.

We met up with Williamson in Carmel, Calif., at the Quail, a Motorsports Gathering 2018 to talk cars and get a connoisseur’s take on his favorite four-wheelers. We present them in order by model year.

Not just any hotrod, this Ford Roadster is a recent creation by noted Los Angeles architect David C. Martin, who has owned the car since 1982 and rebuilt it three times. Winner of the prestigious 2018 America’s Most Beautiful Roadster at the Grand National Roadster Show, it is, quite simply, the most stunning custom in recent memory. Every detail has been painstakingly envisioned and executed. This level of perfection is rarely achieved, and when it is, the result—as we have here—is breathtaking. And with about 600 hp, it goes like hell.

Winner of the 1951 Mille Miglia in a time of 12 hours, 50 minutes.  Photo by Scott Williamson/Photodesign Studios.

The year 1951 was a banner vintage for European cars, and in Italy, the stage was set for future Ferrari victories with the 340 America. The gorgeous berlinetta wore an aluminum body by Vignale, a mainstay among Italy’s coachbuilders during the hot-blooded 1950s. The car was hot-blooded too, winning the 1951 Mille Miglia in 12 hours, 50 minutes, driven by Villoresi and Cassani for Scuderia Ferrari. Shown in the “Spirit of 1000 Miglia” exhibit, it wears its original winning number 405 and is part of Jack Croul’s epic collection.

Why the French get all the credit for designing beautiful tear-drop-shaped cars is a mystery when you take a good, long look at a Jaguar XK Fixed Head Coupe. The earliest ones from the XK120 series are our favorites. This one, owned by Fred and Ramona Bohlander, notches up aesthetics with some tasteful “what if?” mods that make it even more special – like a C-Type cylinder head, special instruments, and other shiny bits of jewelry. These are great cars to drive, and this one looks like a blast.

Owned by Mike Malamut, the 1,111th Porsche manufactured underwent a seven-year restoration by Peter Archibald and received the class award among almost two-dozen Porsche 356 entrants. With its original drivetrain and colorways, it doesn’t get any more elemental than an early 356. This Pre-A Split-Window is a testament to purity, simplicity, and the original vision of Porsche father and son, and designer Erwin Komenda.

Best of Show was a well-deserved win by this rare Pinin Farina prototype concept, built on a Lancia Aurelia B52 chassis and owned by Anne Brockinton Lee. In the 1950s, Lancia was an innovator, and a marque of choice for styling houses exploring the promise of futuristic jet-age design. With a grille that recalls a jet engine and scarcely a roll-up window in sight, this delicate Lancia soared to even greater heights of beauty, thanks to a comprehensive 10-year restoration.

Known as “Mr. Zagato,” David Sydorick brought his rare Fiat to the grass for the “Spirit of 100 Miglia” exhibit. The diminutive Fiat was powered by a 2-liter V-8 engine, and is one of just 27 that wears a Zagato body. Perhaps the most noted collector of all-things Zagato, the owner broke the mold this year, taking Best in Show at the Pebble Beach Concours d’Elegance with his 1937 Carrozzeria Touring-bodied Alfa Romeo 8C, just two days after this photo was taken. Proof, as if any were needed, that good taste is timeless.

A most remarkable story surrounds this rare Iso, the first sports car by Piero Rivolta and one of the earliest designs by then-young Giorgetto Giugiaro. This Italian’s understated beauty is punctuated by a potent Chevrolet 327, Iso’s formula for power and reliability in an era when most Italian powerplants were anything but. No one restores a Rivolta to this condition, except Buddy Pepp, former Executive Director of the Petersen Automotive Museum. It seems that his father once owned the car, and after reacquiring it, Buddy and wife Arline commissioned a restoration worthy of a Bugatti Royale.

The 1966 Lamborghini 400 GT “Interim” owned by Robert Ross was a class-winner at the Quail.  Photo by Scott Williamson/Photodesign Studios.

I’m sheepishly delighted that Scott Williamson chose my old Lamborghini to be among his Quail favorites. These cars are an acquired taste, as an old girlfriend reminded me years ago, calling mine “an adorable cross-eyed flounder.” She’s gone, but the car remains, and it’s better than ever, benefiting from nearly two years of obsessive fettling at the hand of Joseph DeMeo and his team. Thanks to them, it won the Post-War Sports 1961-1975 class out of a field of 47 cars.

Chassis No. 10749 was one of 10 examples commissioned by US importer Luigi Chinetti in 1967.  Photo by Scott Williamson/Photodesign Studios.

No one could blame an owner for saying “I’ll see your GTO and raise you,” because Ferraris don’t get much rarer or any more beautiful than this car. Rare Wheels Collection took the class win with chassis No. 10749, the ninth of 10 Spyders commissioned by US importer Luigi Chinetti in 1967. And no wonder, as it’s been restored to impeccable original specification. Certainly the gold-standard of F-cars, this is the best one we’ve ever laid eyes on.

One of 225 Lamborghini Isleros with bodywork by Marazzi.  Photo by Scott Williamson/Photodesign Studios.

Roy Cats’ rare Islero S is the 79th of a mere 225 Isleros built by Marazzi, Carrozzeria Touring’s neighbor who stepped in to take over production when the storied “House of Superleggera” folded in 1967. Although the conservative Islero was overshadowed by the Miura and Espada, it was Ferruccio’s favorite car to drive. This red one has been restored by marque specialist Gary Bobileff, and was our photographer’s pick for best Islero in the bullpen.

Old Italian cars aren’t strangers to Ron and Diane Spindler, who have owned just about every marque ending in “i.” Like the Spindlers, their second-series Espada (there were three series made) is an old friend, and one whose looks never seem to age. Marcello Gandini’s design was radical in 1968 and remains radical today, a half-century after shattering expectations of what a four-place supercar could be.

David Atcherley’s 1974 Lancia Stratos, one of 492 examples built from 1973 to 1978.  Photo by Scott Williamson/Photodesign Studios.

Lancia is best known for jewellike predecessors of the Stratos made in the pre- and early post-war eras. But the Stratos was designed as a rally car, and rally it did. Another Gandini design, the Stratos had a production run of 492 examples built from 1973 to 1978. Most were kitted out for race, but a few survived the indignity of competition, like David Atcherley’s totally original beauty. He acquired the car on the website Bring a Trailer, whose website froze from the amount of traffic generated when the car was listed for sale.

Designed by Alois Ruf 30 years ago, this 1988 RUF CTR Yellowbird can reach a top speed of 211 mph.  Photo by Scott Williamson/Photodesign Studios.

Everyone’s friend Bruce Meyer took the class award with one of the newest “old” cars in the Winner’s Circle. His car, #001, was the first of 29 examples of the RUF CTR Yellowbird made, and is a machine that will outperform most any automobile made today. Imagine that it was designed by Alois Ruf 30 years ago to achieve a top speed of 211 mph! Nothing photographs in profile quite like the shape of a 911.