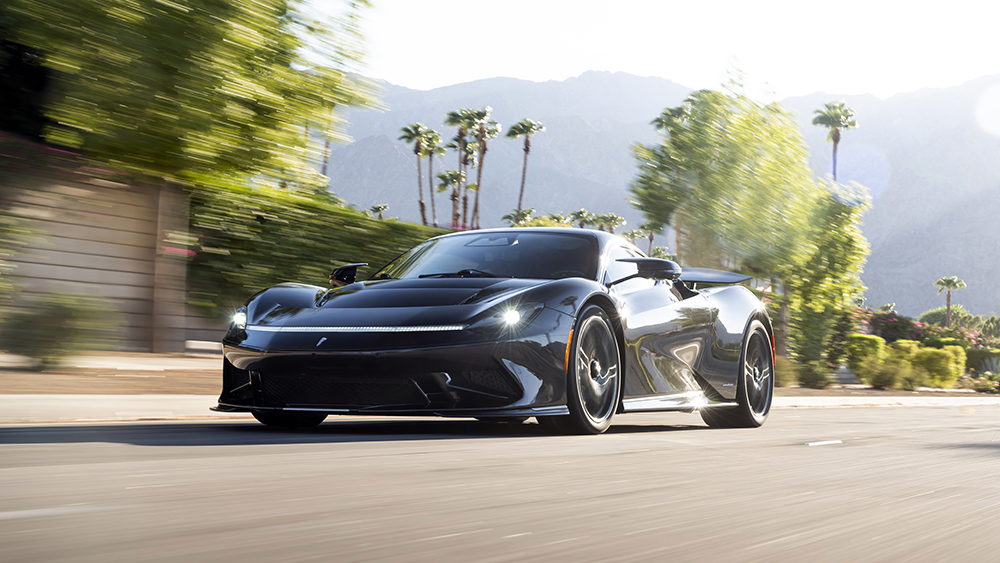 Within the past several years, many of Europe’s few surviving coachbuilders have had to redefine themselves as boutique carmakers, with mixed results. Of these, Italy’s Pininfarina, arguably the most revered carrozzeria of them all, hopes to set the benchmark for both design and execution with its offshoot Automobili Pininfarina and the new 1,877 hp, all-electric Battista hypercar.

Testing the two-seater in Southern California’s high desert, we can’t come close to teasing its limits, but no matter. Pressing the throttle in Energica mode—“limited” to a mere 1,495 hp—is like teleporting to the next apex with a side effect of intense chest compression; dialed up to Furiosa, which allows access to every last horse, the acceleration feels like one of them kicked you in the solar plexus. No surprise, since the power train is supplied by EV wunderkind Mate Rimac and is the same one that underpins his Rimac Nevera, the fastest-accelerating production car in the world.

With four electric motors, the 1,877 hp Battista can be piloted from full stop to 60 mph in under two seconds.  James Lipman

Named after Pininfarina’s founder, the $2 million-plus Battista is equipped with an electric motor at each wheel and a 120 kwh high-power-density battery pack. The results are stats that read like typos: 1,696 ft lbs of torque, a 217 mph top speed and a zero-to-60 mph time under 2.0 seconds—quicker than MotoGP prototypes. Just when you’ve caught your breath from the absurd thrust, the Battista’s cornering prowess snatches it away again. The car vectors torque in a way we’ve simply never experienced, spinning the outside wheels faster than the inside front rubber in a corner, allowing the car to pivot on a tighter radius, or so it feels.

The Battista also turns a corner when it comes to the constructor’s design language. Automobili Pininfarina’s design director Luca Borgogno’s sleek, elegant work is a worthy offering to the gods of balance and proportion; squint and you just may glimpse a Ferrari 458 in the hips and sensuous haunches. But details such as the razor-thin rear LEDs and a split active-aero rear wing confirm that this beast is sui generis, the first product from a new Pininfarina, one that has evolved into artist and automaker both. No more than 150 examples of the Battista will be sold, with US deliveries starting in 2022.