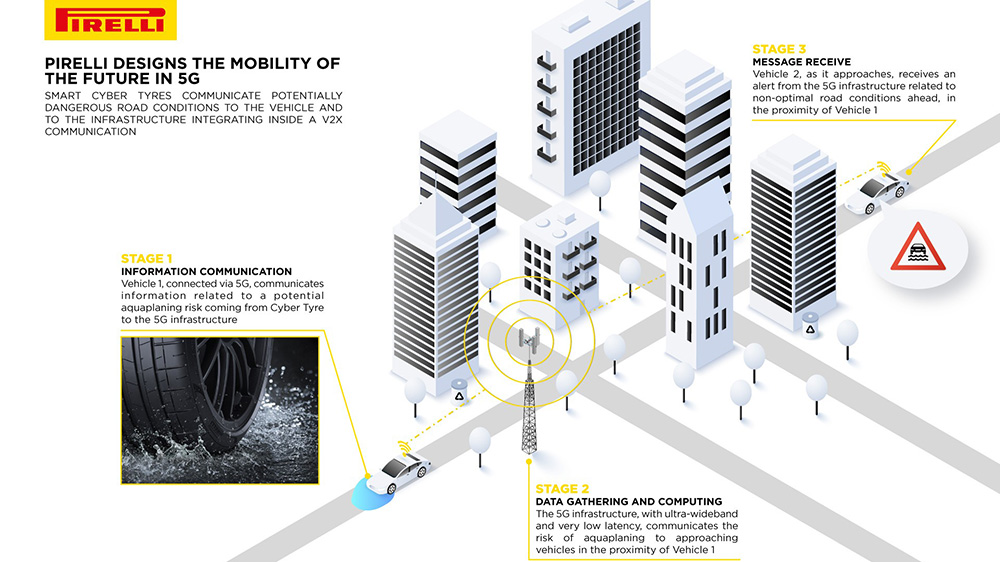 Last week, Pirelli unveiled its new “Cyber Tires”—wheels that can transfer road data over an ultra-fast 5G network, according to a press release. The demonstration of the tire’s vehicle-to-everything (V2X) technology took place at a 5GAutomotive Association event in Turin, Italy.

While V2X technology isn’t new, it is now only just starting to show up in mass-market vehicles. And Pirelli appears to have found a usage for the 5G network that few in the auto industry could’ve predicted: tires that can communicate with other cars about road conditions.

During the showcase, a car equipped with the company’s new Cyber Tires would send a signal to the network every time it detected water or any other condition that could lead to a loss of traction. When water was detected, for instance, the tires would immediately send a warning about the risk of hydroplaning to a following car equipped with V2X. That warning arrived and was processed nearly instantaneously thanks to 5G’s ultra-high band and low latency.

The V2X technology could make driving, especially in treacherous conditions, much safer for both the car’s driver and other cars in the area. In theory, a car equipped with Cyber Tires would be able to process data about oncoming hazards and adjust before the driver even sensed or experienced a loss of traction. The promise of that technology becomes even more intriguing with the emergence of car-based artificial intelligence, which could, in theory, automate a car’s adjustments to road conditions.

But sensing hazards isn’t the only benefit of the Cyber Tire. In addition to its V2X technology, the tire is also equipped with an internal sensor that can track model type, mileage and dynamic load.  The tire can also communicate with municipal infrastructure like street lights and may soon be able to communicate information like how much time remains until a light turns green.