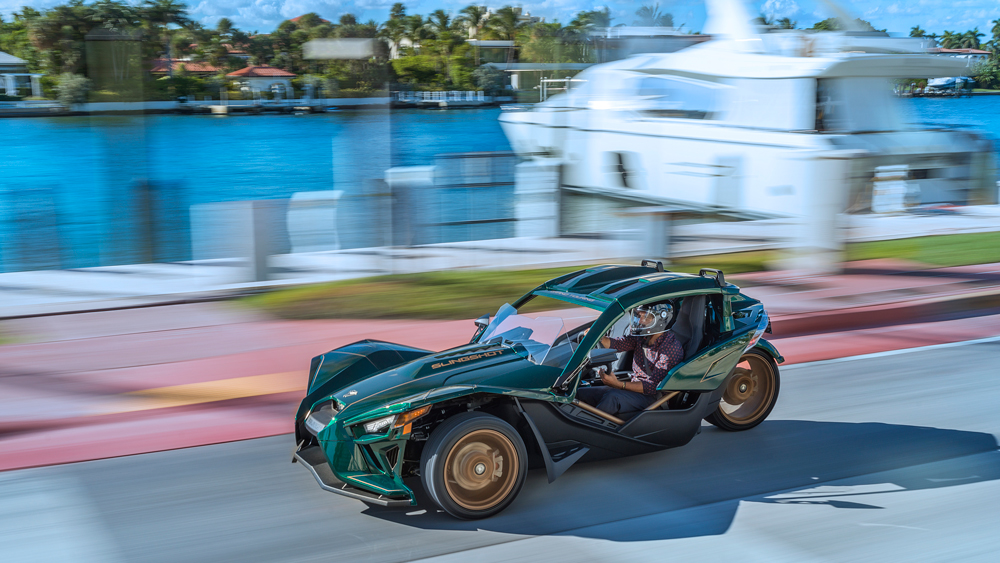 Ever since the Polaris Slingshot hit the scene five years ago, we’ve been taken with its wild looks and memorable driving experience. For 2020, the three-wheeled auto-cycle received a major update with goodies like a new engine and redesigned interior. Although the model was previously offered only in a five-speed manual, the 2020 iteration can now be equipped with a five-speed automatic. Earlier this year, we got a chance to test the updated Slingshot, and we came away pleased with its added refinement and performance.

But the Grand Touring LE isn’t just a nicer variant than the SL and R below it. This is a limited-edition Slingshot, of which fewer than 300 will be built. First off, the Grand Touring LE will only come with the five-speed automated manual transmission. This is great for Slingshot fans who can’t drive stick, but when I tested AutoDrive late last year, I wasn’t so happy with it. The transmission, which lacks paddle shifters, is fine when you’re driving slow or really fast, but at a medium pace, AutoDrive comes off confused, kind of like someone you’ve just woken up at 3 am. The five-speed manual, on the other hand, is terrific, but is only available on the R edition.

The optional Stage 1 Tune upgrade boosts output to 203 hp and gives the three-wheeler a top speed of 125 mph.  Photo: Courtesy of Polaris Inc.

Other Grand Touring LE features include an exclusive Fairway Green paint scheme with bronze accents. The wheels, measuring 18 inches up front and 20 inches in back, are also bronze. With Grand Touring in its name, this Slingshot is positioned for longer journeys and features a taller wind deflector and a color-matched Slingshade roof.

Inside, you’ll find quilted seats, interior accent lighting and the make’s easy-to-use 7-inch Ride Command infotainment system. The latter has embedded navigation, but Apple CarPlay and Android Auto are not supported. A 100-watt Rockford Fosgate audio system also comes standard. One notable extra is the $2,400 choice to add heated and cooled seats, but you can also select the option for just one seat if you want to save half of that.

Targeting extended journeys, this Slingshot has a taller wind deflector and a color-matched Slingshade roof.  Photo: Courtesy of Polaris Inc.

The Grand Touring LE version of the Polaris Slingshot is currently headed to dealers, so if you’re aiming to get one, don’t hold back too long or they’ll be gone.