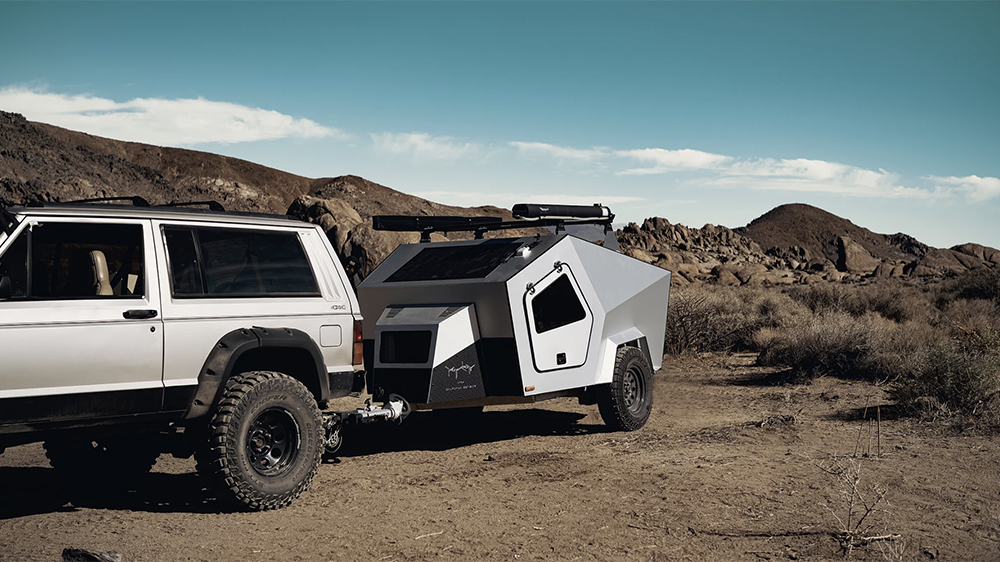 The California-based start-up has just unveiled its second all-electric trailer of 2021, the P17X Explorer. The new model includes everything its predecessor did, along with a number of off-road-centric upgrades that make it well-suited for overlanding.

In March, Polydrops unveiled the P17A, an angular teardrop camper designed to be specifically towed by battery-powered vehicles both big and small. The auto industry’s shift to electrification is still in the early days, so we’re still figuring out just how much towing effects a EV’s range. Because of this, Polydrop’s trailer features a lightweight design and maximum 12-kWh power setup, which includes 130-watt solar panels, meant to reduce the stress on an electric car or truck’s powertrain. It could also provide enough juice for six days of off-the-grid living, according to the brand. We were impressed enough to include it on our latest list of the best travel trailers.

Inside the P17X Explorer  Polydrops

With the P17X, Polydrops has added a set of 235/75/15 all-terrain tires, front-body armor, a safety chain, marine-grade door hinges and a roof-rack, according to HiConsumption. That transforms the P17X into a trailer that you can take beyond the campground. Overlanding is about the journey spent getting to unexpected locations, and the company’s new trailer promises to be more than rugged enough to tackle the off-the-beaten path, as bumpy as it may be. And since it features the same power setup as the P17A, you might even want to try towing it with an all-electric off-roader like the Rivian R1T, GMC Hummer or even the Tesla Cybertruck—if it ever actually goes into production.

Inside the P17X’s gullwing door, you’ll find a cozy cabin almost identical to that of the P17A. There’s room for a full-size mattress that can comfortably fit two, a kitchenette with a stovetop and fridge accessible from inside or outside and an electric climate control system that’ll make sure you’re comfortable no matter what it’s like outside (thick R14 insulation will also help with that).

Deliveries of Polydrops’s latest trailer aren’t expected to begin until next summer. Prices will start at $34,990. And, if you’re already sold, the company is currently taking reservations for a $1,000 deposit.