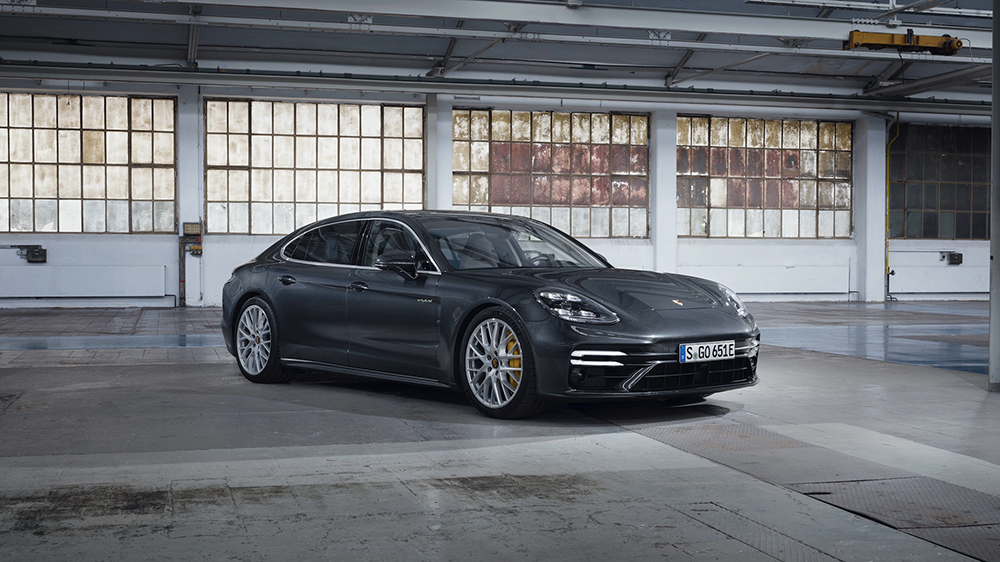 Porsche just unveiled its second most powerful production vehicle, and its not a turbo-charged 911 or 718. Instead the distinction belongs to the roomy new Panamera Turbo S E-Hybrid.

On Monday, the German automaker unveiled three new updates for its full-size four-door range for the 2021 model year. And while this is great news for anyone who wants more Porsches with leg room, the trio also offers proof that comfort doesn’t have to come at the expense of performance.

That’s because the flagship Panamera, the Turbo S E-Hybrid (above), is a true beast despite its electrified powertrain. Pop open the plug-in’s hood and you’ll find a potent 4.0-liter twin-turbo V-8 engine that outputs 563 horsepower, an increase of 13 hp over its predecessors. While that’s almost certainly more power than you’ll need, it’s paired with a 134 horsepower electric motor that pushes total output to a staggering 689 horses and 642 lb-ft of twist, easily making it the most powerful Panamera and the second most powerful Porsche, according to a press release. Thanks its powertrain, the sedan and Sport Turismo wagon version of the car can rocket from zero to 60 mph in just three seconds. The executive model, which comes with a slightly longer wheelbase, can do the same in 3.1 seconds. Regardless of which Turbo S E-Hybrid you pick, though, it’ll be able to reach a top speed of 198 mph.

Up next is the 4 E-Hybrid, which is also available as in sedan, executive and Sport Turismo versions. While it can’t compete with the Turbo S E-Hybrid’s brawn, its 2.9-liter twin-turbo V6 and electric motor combine to output 455 horses. But the car isn’t just powerful, it’s plenty quick, too, able to zoom from zero to 60 mph in 4.2 seconds. The 4 E-Hybrid, like the Turbo S E-Hybrid and the previously announced 552 hp 4S E-Hybrid, features an updated 17.9KWh battery that’s not only made it more powerful but more efficient as well.

Completing the trio of refreshed Panameras is the “traditional” 4S. The gas-powered four-door is powered by a 2.9-liter twin-turbo V6 that churns out 449 horses. While slightly less powerful than the 4 E-Hybrid, it’s actually a hair quicker with the optional Sports Chrono package, able to hit 60 mph in just 3.9 seconds and has a top speed of 183 mph. Like every other 2021 Panamera, it features an eight-speed dual-clutch transmission.