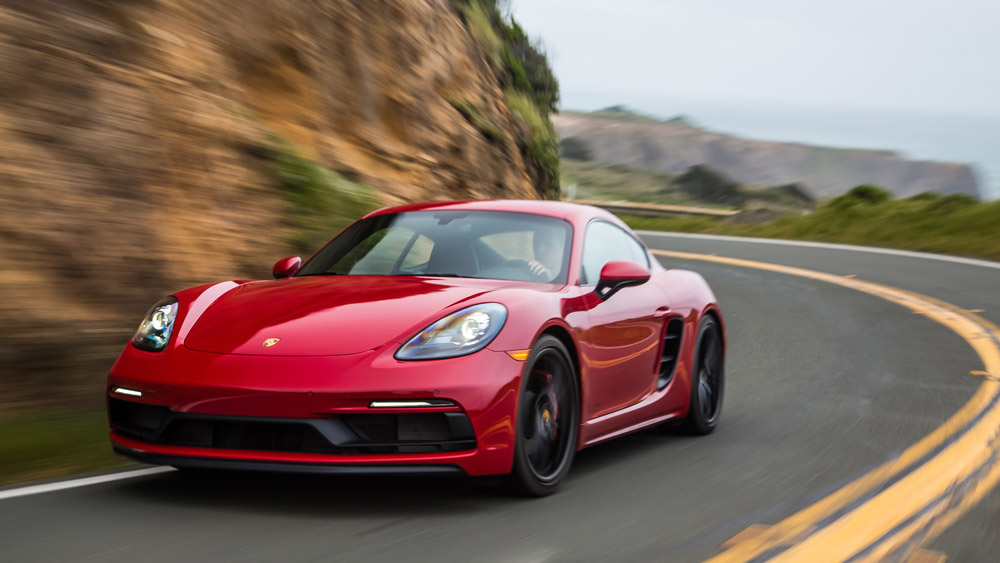 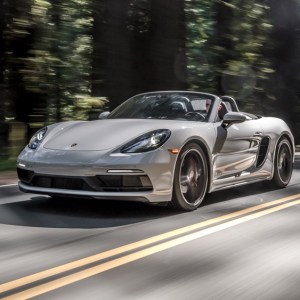 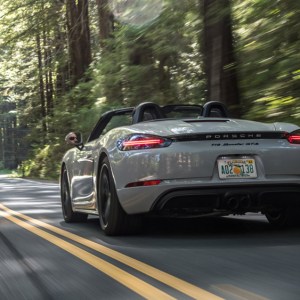 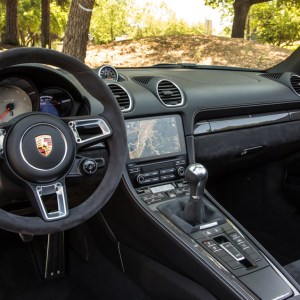 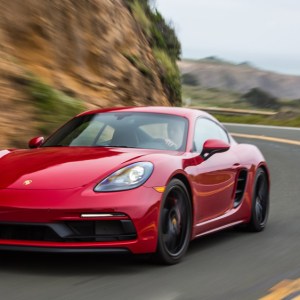 The more things stay the same, the more they change. The highest-performance versions of Porsche’s mid-engine sports models really do rearrange the words of that shopworn phrase. Because even though the 718 Boxster and Cayman GTS look similar enough to the base and S models, these hottest iterations deliver performance—however it’s measured—that eclipses that of any mid-engine predecessor save the outgoing Cayman GT4. And both new GTS models may even inspire technical types to question the logic of opting for a 911 Carrera. Whether on acceleration, handling dynamics, or amenities, the open-top Boxster and Cayman coupe present tough propositions to beat, and in the under-$100K segment they have no equals. (Remember when that amount of money would buy a new 911 Turbo?)

First, a quick lesson in Porsche taxonomy. At present count, there exist 23 variants of the 911—from all the Carreras, Targas, and big Turbos to the track-oriented GT cars—and each is powered by a flat-six engine between three and four liters, all twin-turbocharged except the naturally aspirated GT3s. What makes the 718 such a remarkable oddity is that it’s powered by a lowly flat-four (this generation is called the 982), replacing the flat-six (in the previous 981 models) that was a cousin of the 911 power plant.

The notion of a four-banger boxer engine conjures recollections of Volkswagen Beetles and ancient Porsche 356s, cars with engines that were relatively primitive—if capable—even when new. (Four-cylinder Carreras are a whole ’nother story, and were some of the most complicated, diabolical, and high-strung motors ever made.)

The decision to revert to a four-cylinder configuration was not taken lightly, and the benefits begin with lighter weight and a more compact—and powerful—engine. Displacement in the GTS is reduced to 2.5 liters, with the engine force-fed a diet of fuel and air through a new intake manifold that optimizes airflow and one VTG (variable turbine geometry) turbocharger, with a larger compressor wheel, which confers increased power with greater fuel efficiency and lower emissions. And that power is—hold on—365 hp with 317 ft lbs of torque from 1,900 rpm. The engine revs to 7,500 rpm and delivers an impressive zero-to-60-mph time of 3.9 seconds for either model equipped with the PDK (Porsche Doppelkupplung) transmission. That betters its 3.4-liter, six-cylinder predecessor by half a second.

Indeed, Porsche’s flat-four is one serious piece of engineering. One challenge to designers is the typical flat-four sound, often uncharitably likened to that of a lawnmower. Through careful intake and exhaust design, as well as the sport exhaust system that comes standard on the GTS, Porsche engineers have given the 718 a voice that is, if not exactly stentorian, at least resonant and authoritative, and unmistakable for a Subaru or—horrors—a Briggs & Stratton.

On a recent drive, our Porsche hosts let us loose from our Napa, Calif., base camp to attack about 250 miles of northbound roads through sparsely populated stretches growing who knows what. We sampled freeways, backroads, and coastal routes, threading through S-curves that dissected the redwood forests of Northern California. They looked for all the world like a dinosaur hangout from the Jurassic: Ferns, moss, and rafts of forest canopy darkened our route, punctuated by dappled light when the growth above occasionally gave way to the sky.

Those roads extracted the best from the 718 GTS, making it hard to imagine a better car for the job. Here, 365 hp seemed like a sinful waste of power—more than up to any task—and made us realize how silly it sounds to bandy the merits of a 700 hp this-or-that when such specifications are purely academic and have no application in the real world. In fact, such machines are grotesque caricatures compared to the Porsche, especially in the context of real roads at (marginally) legal speeds.

We primarily drove with the optional PDK automatic transmission, a seven-speed wonder that obsoletes the six-speed manual in every measurable way—acceleration, torque, top speed, and precision. Except that it doesn’t. On public roads and not on the track, we’ll take the stick shift, thank you, and leave fractions of a second to the academics or the high-school fanboys who haven’t a clue about what really accounts for driving satisfaction. The tactile feel of the lever, the brilliant rev-matched downshifts (thanks in no part to this driver), the heel-and-toe tap dance—it all adds up to a thrilling reminder that the driver still has a say in the automotive relationship.

Regardless of transmission choice, the other magical hand played by the 718 Boxster and Cayman GTS is the chassis design, which pulls out the stops on “sport” and equips both models with a host of standard items that are otherwise optional, or not available at all, on the base and S variants. Important to understand is that the platform for Boxster and Cayman are the same—hard to believe but true, according to the factory engineers with whom we spoke. In fact, apart from the topless nature of the Boxster and any attendant loss in torsional rigidity (which is, practically speaking, nil), the two models feel, perform, act, and sound identical to one another. Our primary driving was done behind the wheel of the Cayman, which gets points—thanks to its having no sunroof—for affording more headroom than any sports coupe in recent memory. Tall drivers and copilots will sit comfortably in this car. In the scheme of things, the wheelbase, at 97.4 inches, is relatively short and reminds us how a mid-engine design rewards drivers with neutral handling and perfect front-to-rear balance.

If either car has any shortcomings, it’s in the same way a golden retriever has shortcomings—hunting is the order of the day, and slow walks be damned. Precision is the Cayman’s (and Boxster’s) middle name, and the car constantly reminds its driver of its capabilities on challenging roads. Lots of Porsche-specific acronyms are responsible for either 718 GTS’s handling prowess. PASM (Porsche Active Suspension Management, an electronic active damping system that continuously varies individual damping forces based on driving behavior) lowers the stance by 0.39 inches; the optional PASM sport chassis lowers the car by more than 0.75 inches. Comfort isn’t sacrificed, but when Sport or Sport Plus modes are clicked on the sport steering wheel’s dial, suspension stiffens, exhaust valves open, and a bit of excitement ensues. That GT sport steering wheel, by the way, is standard fare on the GTS, as are PTV (Porsche Torque Vectoring), which increases traction, lateral dynamics, stability, and turn-in response through brake intervention at the rear wheels and a locking rear differential.

All of this adds up to a Nürburgring lap time of 7 minutes 40 seconds, which is 16 seconds faster than the 981 predecessor. In addition, 20-inch Carrera S4 wheels and sticky Pirelli or Michelin rubber (every car manufacturer works with a couple of tire brands to avoid supply-chain problems) are backed by either standard four-piston steel brakes (these have red calipers) or optional PCCB (Porsche Ceramic Composite Brakes—with big yellow calipers) for reduced weight and massive, brake-dust-free stopping power.

The new Boxster, a tough proposition to beat.  Photo: Courtesy of Porsche AG.

Exterior aesthetic features distinguish the GTS models with specific dark accents on headlights and taillights, specific front and rear fascia, and GTS model designations. The interior presents suede-like black Alcantara—with contrast stitching—covering the inserts of the Sport Seat Plus two-way electric seats. Importantly, the Chrono Package includes a mode switch and Porsche Track Precision app and is identified by an analog clock at the top center of the dash.

Altogether, it’s hard to spec a more buttoned-up two-seat sports car, and for the price, there really is no contest. If cost were no object, one could easily point to A-listers like the McLaren 570S, the Lamborghini Huracán, or Porsche’s own 911 Turbo S. A few rungs down the ladder, one gets thrown the keys to a Porsche 911 Carrera of some sort. But as a precision tool that also does daily-driver duty, looks sensational, and won’t break Piggy, either the Boxster or Cayman 718 GTS is the pick of the litter.

Porsche created a sensation when it introduced the Boxster concept car in 1993 and followed up with the first production model in 1996. Inspired by the 550 Spyder made famous by the ill-fated James Dean, the elemental roadster was the first spyder from the company since Dean’s “Little Bastard,” and featured a mid-mounted flat-six (boxer) engine of 2.5 liters.

An early example of the Boxster.  Photo: Courtesy of Porsche AG.

The car, priced well below a 911, soon became the gateway drug to the intoxicating world of Porsche. A hardtop iteration of the two-seat roadster, called the Cayman, came to market in 2005 as a 2006 model. Its name referred to a crocodile (caiman), and it quickly became a favorite of the weekend racer crowd. Since model year 2016, the Boxster and Cayman have been on their fourth and third generations respectively, switching from flat-six to turbocharged flat-four engines. The 718 designation references the Porsche racer built between 1957 and 1962.  —R.R.

Porsche 718 Boxster and Cayman GTS By the Numbers

3.9     Time to accelerate from zero to 60 mph, for both models equipped with PDK transmission, in seconds

7:40   Time to lap Germany’s Nürburgring racetrack, in minutes and seconds

1        Reduction in engine displacement from predecessor, in liters