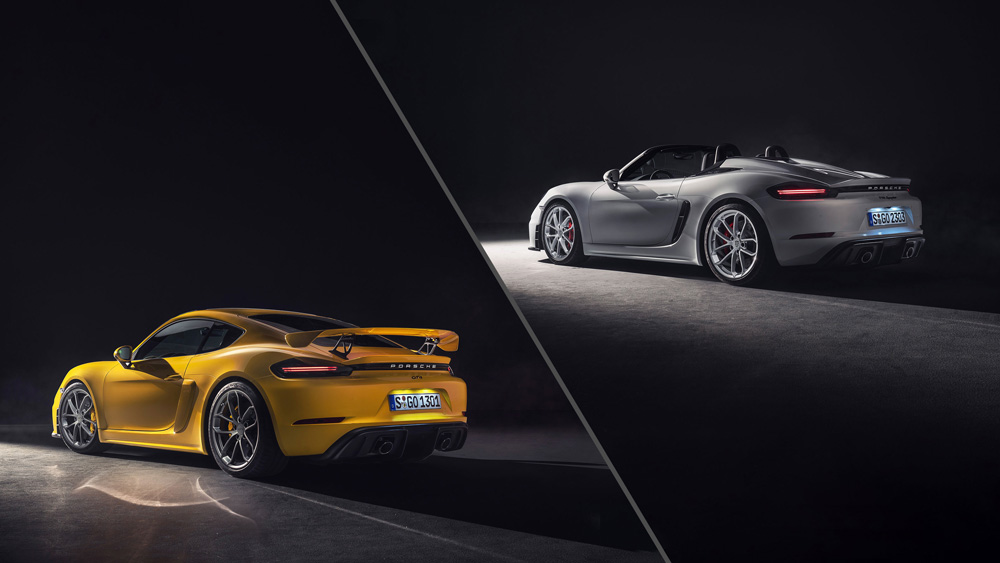 It was all about the rasp and snarl of that free-revving, mid-mounted flat-six power plant. The indelible sounds of the late, great, naturally aspirated Porsche Boxster Spyder and Cayman GT4 engines were a trigger for the brand’s cultish cognoscenti, bolstering a sensually gratifying allegiance that flipped to revolt when smaller, turbocharged four-cylinder motors eventually replaced the sonorous sixes.

Perhaps because Porsche listens to their loyalists (but likelier because sales of the efficient-but-unsexy-sounding four-cylinder models have fallen flat), the new punched up versions of the 718 Cayman GT4 ($99,200) and its open-air stablemate the 718 Spyder ($96,300) have reverted to that winning, naturally aspirated six-cylinder layout.

The halo models are the first to be executed by Porsche’s motorsports division, and shoehorn the 4.0-liter flat-six behind the driver, producing 414 hp—29 and 39 more hp—than their predecessors, respectively. But the real crowd pleaser (or cult appeaser) is that you can order your GT4 or Spyder with any transmission you like, as long as it’s a six-speed manual.

The narrow demographic of speed-seeking, row-your-own-gears connoisseurs would have relished the test environments Porsche presented for the GT4 and Spyder first drive in Scotland: a tight, nastily twisted race circuit named Knockhill, and meandering lanes through the verdant countryside from which the world’s greatest whiskeys hail.

The hardtop GT4 coupe tussles with the racetrack’s challenging radii and daunting elevation changes like a champ, with a tenacious grip that defied the two-seater’s ranking beneath the venerable 911. Putting an engine in the middle of the car enables ever-so-easy direction changes—who knew?

Having an expansive 8,000-rpm power spread and manually swappable gears at your command is one of motoring’s great joys, and the GT4’s package seems perfectly suited to the small track (it also boasts 50 percent more downforce for higher speed corners). Similarly, the Boxster Spyder’s on-road composure made it a weapons-grade tool for committed, high-speed road warriors, with its open cabin maintaining a cushion of air that kept the wet weather out above approximately 35 mph. Just blast the heater and go—the road is your oyster.

Though some of the old engine’s sonic effect is lost due to the addition of the Euro-mandated gasoline particulate filters (nothing sings quiet like an unrestricted exhaust), the new GT4 and Spyder models maintain that Porsche still knows how to tap into that indelible combination of focused performance and engaging driver dynamics.