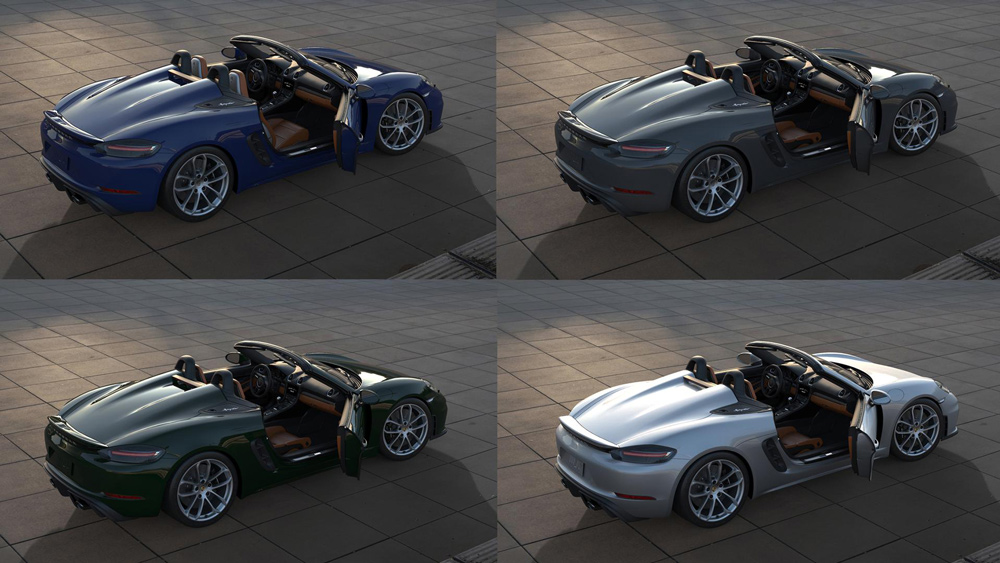 Porsche folks love 911s, but those in the know have always counted on the 718 Cayman and Boxster models to deliver an engaging, seat-of-the-pants driving experience equaled by few other sports cars. Lighter than a 911, they have ideal weight distribution thanks to the mid-engine layout and, with 414 hp and 309 ft lbs of torque, enough output for all but the most power-crazed drivers.

The 718 series cars really deliver the goods in a balanced, friendly package, and a PDK-equipped Spyder squirts to 60 mph from standstill in only 3.7 seconds. Squint your eyes, and the latest 718 Spyder is conceived in the spirit of Porsche’s 550 Spyder, the 65-year-old icon built for competition and made long before the era of impact bumpers and even the 911 itself.

The most elemental of all the 718 Boxster series, the Spyder takes things to a minimalist extreme, notably with a soft top meant to be raised as little as possible. Certainly, the 718 Spyder is the sportiest and best looking of the topless 718 variants, and the most expensive, with a base MSRP of $98,300. So, it’s only natural that prospective owners might want to have an example made even more exclusive still.

For them, Porsche offers the 718 Spyder 000 Package, developed by the aptly named Porsche Exclusive Manufaktur division of the automaker and 000 magazine. Porsche Exclusive Manufaktur, familiar to those who like custom Porsches built by the factory, has teamed up with 000, a quarterly journal about all things Porsche and a mainstay on the coffee tables of over-the-top enthusiasts of the marque.

Founded by Alex Palevsky and Pete Stout (the latter being the former editor of Panorama, the official publication of Porsche Club of America), 000 celebrates Porsche’s past and present accomplishments, and has a particular appreciation for color and style as expressed by Porsche over the decades. These guys are purists, and the four elite build packages they’ve come up with are sure to resonate with those whose idea of the perfect Spyder goes beyond the confines of Porsche’s online configurator.

Each interior is redone by hand to feature Ascot Brown complemented by Pebble Grey stitching.  Photo: Courtesy of Porsche AG.

The Porsche 718 Spider 000 Package was inspired by the marque’s last “analog” supercar, the Carrera GT, which features a full-leather interior in now-famous Ascot Brown. The problem is, the Spyder’s interior is only available with black Race-Tex (think Alcantara), or some combination of black and red.

Porsche has its strange ways, as anyone familiar with Exclusive Manufaktur knows. In the case of the Spyder, cars are built on an assembly line with the “regular” interior, then the finished car is sent to the Exclusive workshop to have the interior discarded and redone by hand in Ascot Brown with Pebble Grey stitching. That circuitous methodology explains why they call the department Exclusive. But the interior embellishments aren’t the only special treatment the 000 Package cars receive.

Boris Apenbrink, head of Porsche Exclusive Manufaktur, suggested that four builds be configured to complement the special Ascot Brown leather, one each by members of the 000 team. Exterior colors are GT Silver Metallic (the Carrera GT launch color), three Paint to Sample (PTS) colors of Slate Grey (a 1960s-era color), Brewster Green and Albert Blue (a fantastic non-metallic hue from the early 1970s).

A variety of details distinguish one build from the other, including carbon-bucket or heated-adaptive sport seats, and Bose or Burmester sound systems. And ceramic-composite brakes are de rigueur options. The Spyder is such a special car that making it more special still—with the imprimatur of the factory and 000—is a rare opportunity indeed.