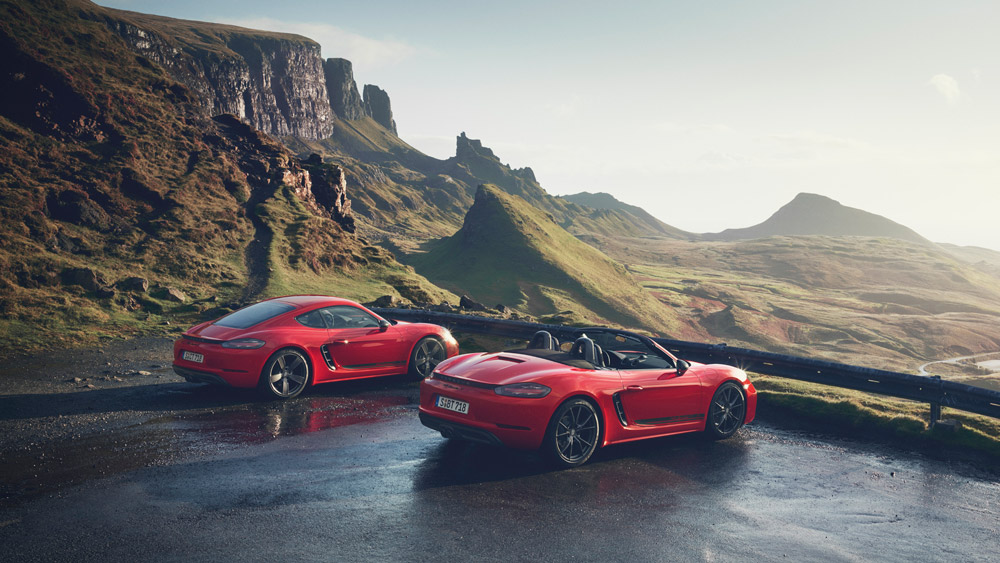 Porsche pleased its purists in 2017 with the introduction of the 911 Carrera T, a performance-focused variant of its venerable sports car. That special edition 911 was snapped up quickly by those eager to sample a modern Porsche that took more than a dollop of DNA from the marque’s sporting past. Now the company is wisely bringing some of that same racy goodness to its 718 Boxster and Cayman models.

The new 718 Boxster and Cayman T start with a turbocharged two-liter, four-cylinder engine that’s good for around 300 hp, and then Porsche layers in distinctive T touches that include 20-inch alloy wheels, a short-throw six-speed gear shift (the dual-clutch PDK autobox is an option), the Sport Chrono package and, in a first for the model range, Porsche’s PASM suspension management system riding on a chassis that’s been lowered by 20 millimeters.

While a range of typically Porsche colors are available (including red, yellow, and two shades of black), there are two wonderfully retro colors special to the 718 T—Lava Orange and Miami Blue. No U.S. pricing just yet, but Porsche says the total T package will ring in at around 5 percent to 10 percent less than if a customer selected all of the options on their own.

The T isn’t for “turbo” but for “touring.” In German, however, touring translates to aggressive backcountry driving and not leisurely, well, touring. That spirit is captured in some of the interior touches visited upon the two-seat Cayman and Boxster T, including black strap door pulls (a racing world staple) and seats with black Sport-Tex inserts that are limited to two-way electric adjustment (set it and forget it). There’s also a slew of T-specific logos throughout the cabin (so people know what you’re driving) and no PCM infotainment system (to save weight, though those wanting to hear music other than the engine can add PCM back in).

Perhaps the nicest touch is the padded GT-style steering wheel that facilitates that trademark Porsche contact with the road. A critical part of that wheel is a small but powerful black Sport Chrono dial located at the 4 o’clock position, which allows the driver to instantly switch between standard, Sport, and Sport Plus modes, a choice that can radically affect the driving experience by quickening PDK shift response time and stiffening the chassis settings.

One feature unique to the T version of the 718 models is Porsche’s PADM, a dynamic gearbox-mounted system that works to reduce vibrations that typically plague the transmission tunnel area when a car is under extreme loads. Porsche says PADM contributes to even smoother shifts during fast curves and doesn’t adversely impact ride comfort.

All of these technological additions are lovely, but perhaps the biggest plus of saddling up in a new 718 T is that the stance of the car is just right. Between the large wheels and tastefully lowered stance, the car takes on a mean and purposeful demeanor that gets back to the heart of what we all love about Porsches, a car that can serve as a traffic-clogged daily driver but whose roots, always, are back at the track.