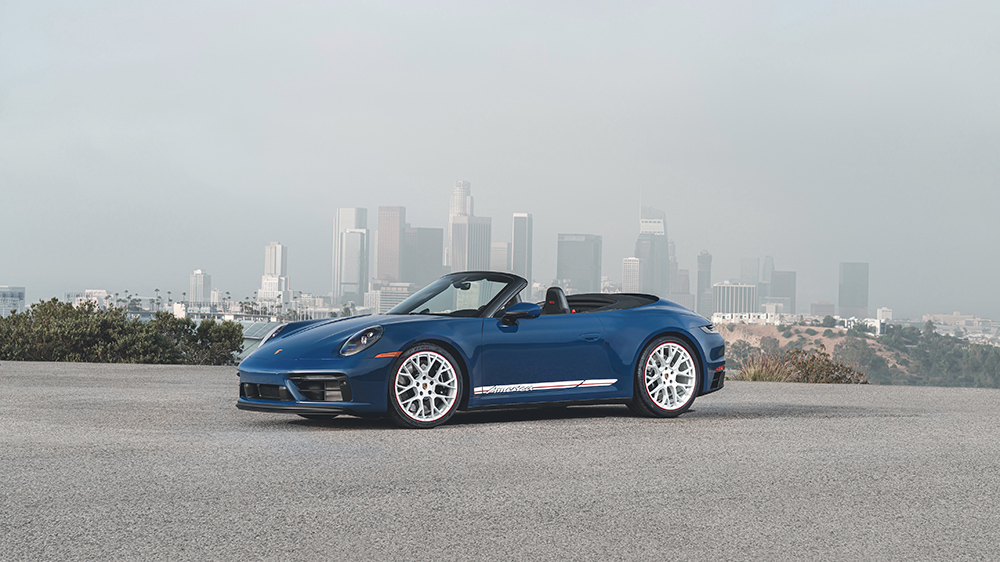 Porsche has been in the US for 70 years. And to mark that milestone, the German automaker has just unveiled a limited-edition 911 Carrera GTS Cabriolet. The patriotic-themed variant is based on the first car the marque made specifically for the US—the aptly named 356 America Roadster.

The company’s automobiles first started popping up here in 1950, thanks to New York-based importer Max Hoffman. Although the Porsches proved to be a hit with his clientele, Hoffman urged the brand to bring over a lighter and less expensive model that he was sure would sell even better. That car would be the 356 America, which arrived here in 1953. Only 16 examples of the stripped-down convertible were ever built, but it would serve as the catalyst for one of Porsche’s best-known vehicles, the 356 Speedster. It would also serve, decades later, as the inspiration for the 964-generation 911 America Roadster, which was released in 1992 and 1993.

All three America models share common elements: They only come as cabriolets, have manual gearboxes and are rear-wheel-drive. The newest version, which was designed by Porsche Exclusive Manufaktur, is finished in a coat of Azure Blue 356 and has an all-black windshield frame, two touches that nod to the original.

There are some new details, too. These include red and white stripes on the sides with the word “America” emblazoned on them, as well as white “911 Carrera” and red “GTS” badges on its rear. The most striking new flourish, though, is the tri-finished RS Spyder wheels, each of which has a silver face, white spokes and red outer pinstripe.

The cabin is a little more streamlined. Everything, from the steering wheel to the gear shifter to the seats, is covered in black leather. The only flashes of color are red and white contrast stitching on the dashboard, center console and seats, as well as red seatbelts for the rear bench. The doorsills also have an illuminated plate commemorating the 70th anniversary of the 356 America. If you prefer a little more color, there’s an “extended interior package” that adds even more red.

The rest of the 911 Carrera GTS Cabriolet has been left alone. That includes a twin-turbo 3.0-liter flat-six that can pump out 473 hp and 420 ft lbs of torque. That’s makes it exponentially more powerful than the 356 America, which had a flat-four that produced just 70 hp. Performance upgrades like rear-axle steering and carbon-ceramic brakes are available.

The 2023 911 Carrera GTS Cabriolet America will be available later this year. Supply will be limited to just 115 example for North America, 100 of which will be reserved for Americans, with 15 for Canadians. The patriotic convertible will start at $186,370, about $35,520 more than the standard convertible.