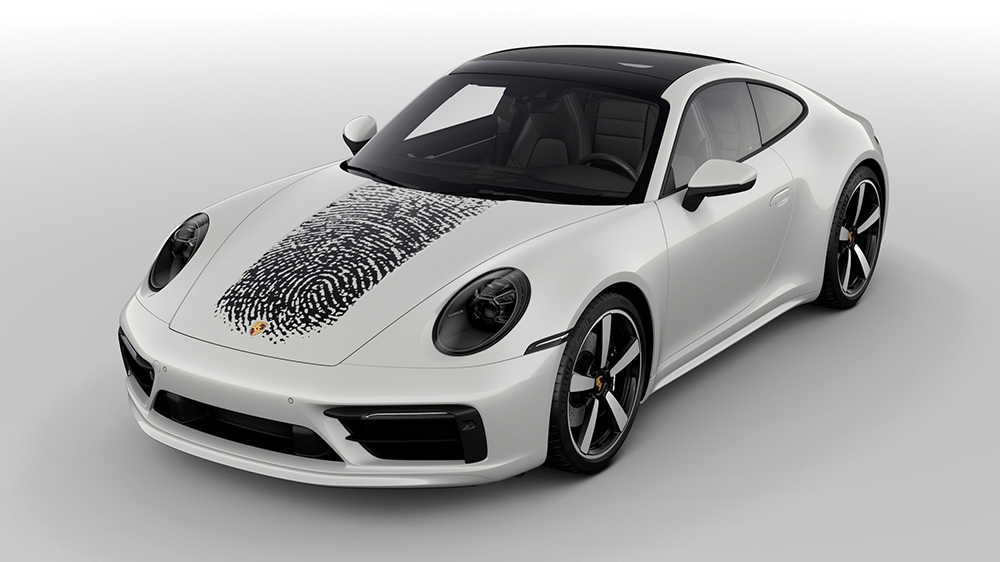 Porsche thinks you should leave an imprint on your next car—literally.

Luxury automakers have long taken pride in giving their customers the ability to customize their vehicles, but Porsche has just taken things to a new level. The German marque is now inviting 911 owners to use their very own fingerprint as a design element on their car.

Thanks to the brand’s newly developed direct printing technology, customers can now have a large reproduction of their fingerprint worked into the paint scheme of their 992-generation 911, according to a press release. And customers won’t have to wait long for the technique to become available either. The brand will start offering it as an option starting next month.

Developed in the paint shop at Porsche’s training center in Zuffenhausen, Germany, the new technology can produce designs that are too detailed for conventional painting methods. After production of the 911 is complete, its hood is removed, the biometric data is processed (so that it can’t be used illegally), and a robot applies the fingerprint design before it is finished with a clear coat and polished.

So why use the tech to apply giant fingerprints to each car? It’s not because Porsche’s clients were clamoring for it, but rather because the brand wanted to highlight how the tech can be used to customize each 911 with truly personalized designs. The company said that other designs will soon be available.

A closer look at the results of Porsche’s new direct printing technology.  Porsche

“Individuality is very important for Porsche customers. And no design can be more personal than your own fingerprint,” Porsche executive Alexander Fabig said. “Porsche is a pioneer in personalization and has developed the direct printing method together with partners. We’re especially proud of having developed a completely new product offering based on new technologies.”

As you might expect, this level of customization doesn’t come free. The option will cost customers an extra $8,100, the marque says. Given that the 911 starts at just short of $100,000, we’re guessing that anyone interested having their fingerprint emblazoned on the hood of their car probably won’t mind shelling out an extra 10 percent.