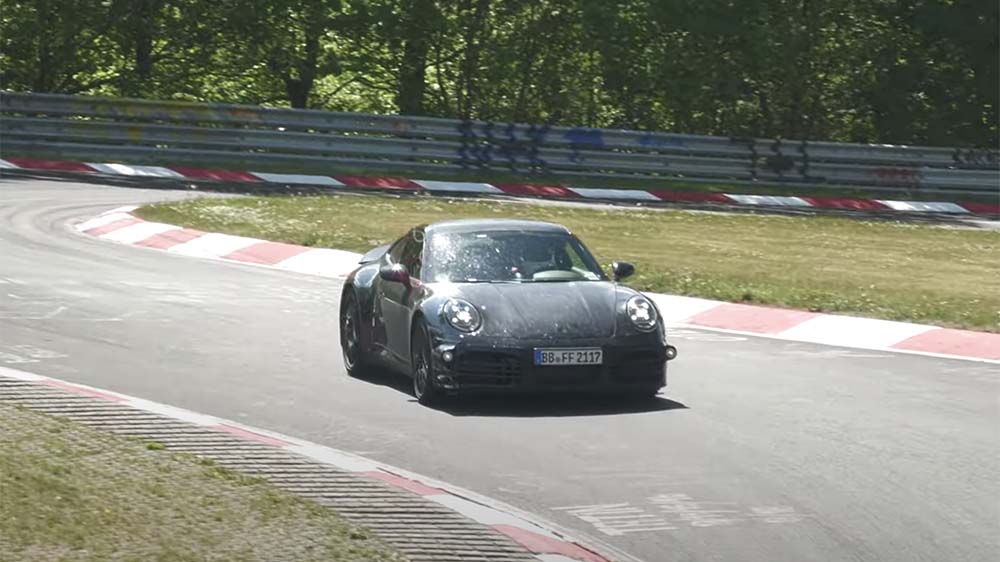 It’s no longer a question of if a hybrid Porsche 911 is coming, but when.

The answer might be pretty soon if a new video from YouTuber Automotive Mike is any hint. The clip, which was uploaded to YouTube this weekend, shows what is believed to be the 911 hybrid prototype undergoing testing at Germany’s legendary Nürburgring race track.

In the video, you can see the lightly camouflaged 911 getting a run out. We don’t know what kind of speeds it was able to hit, but it looks to be traveling at a pretty decent clip. The footage also offers a peek of some potential body modifications, including a dual-exhaust system in the back and an all-new front bumper that appears to have active aero elements.

Porsche did not immediately respond to a request for comment.

Nothing in the video comes as a complete shock, of course. Earlier this year, Porsche Italia’s Pietro Innocenti confirmed that a hybrid 911 was on its way. Although he wouldn’t say when exactly it would arrive, he did say it could be before 2024. And last November, footage surfaced showing a similar prototype undergoing testing at the Nürburgring.

While purists may find the idea of a hybrid 911 dismaying—some still haven’t gotten over the introduction of a water-cooled engine back in 1998—Porsche has already shown it can build a successful hybrid, like the Panamera and Cayenne. The brand has made clear that a potential electrified 911, which would likely be called the Turbo-E Hybrid, would prioritize performance over efficiency.

Although the hybrid may be here soon, a fully electric 911 isn’t on the horizon at this point. Back in 2020, CEO Oliver Blume said that the 911 is a “car prepared for internal combustion engines, and it’s not useful to combine it with pure electric mobility.” So, for now, sports car converts to the electric revolution will have to stick to the popular Taycan if they want to remain loyal to Porsche.