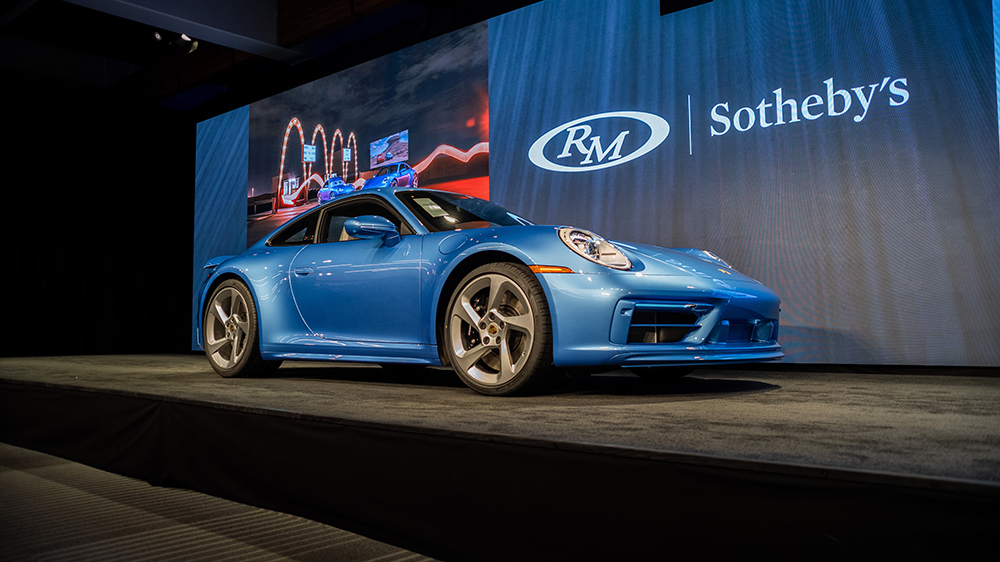 Even cars from animated films are a hit with collectors.

Just look at the Porsche 911 Sally Edition, which is based on the character of the same name from Pixar’s Cars movies. The sports car sold for $3.6 million at RM Sotheby’s Monterey Car Week auction this past weekend, with every single dollar of its jaw-dropping hammer price going to charity.

Saturday’s auction was a reunion for key members of the Cars team, including Bonnie Hunt, who’s voiced Sally Carrera in the three movies; Jay Ward, Pixar’s creative director, and Bob Pauley, who handled production design for the first and third entries in the franchise. They were on hand to witness the winning bid come in via telephone on Saturday. Although it attracted significant interest before the sale, it’s unlikely that many saw the car, which was said to be valued at more than $200,000, commanding such a high fee.

The current-generation 911 Carrera GTS is no normal movie car, and not just because it’s based on a computer animated character. The vehicle that went up for bid is a one-of-a-kind example built by Porsche Exclusive Manufaktur division to resemble Sally as closely as possible. It has a number of unique design elements, including a Sally Blue Metallic finish, custom interior and even a “tattoo” beneath the rear wing. The car is also street legal and, in news sure to please enthusiasts, is powered by a flat-six mated to a seven-speed manual transmission.

“What a night and what a result! It’s fantastic to see a car inspired by my character in Cars do so much good,” Hunt said in a statement. “I’ve loved playing the role of Sally for the past 16 years, she has a special place in my heart, and it’s wonderful that her personality and values continue to inspire new generations today. The car looked amazing, and I know the team put their heart and souls into creating it. I am thrilled for the new owner who has something very special, and completely unique.”

The $3.6 million will be split between two charitable organizations, Girls Inc. and USA for UNHCR. Girls Inc. is network of 76 local organizations throughout the US and Canada that aims to help girls and young women to effect positive change and become leaders. USA for UNHCR, meanwhile, is focused on providing urgent help to the nearly 6.2 million refugees displaced across Europe since Russia invaded Ukraine earlier this year.