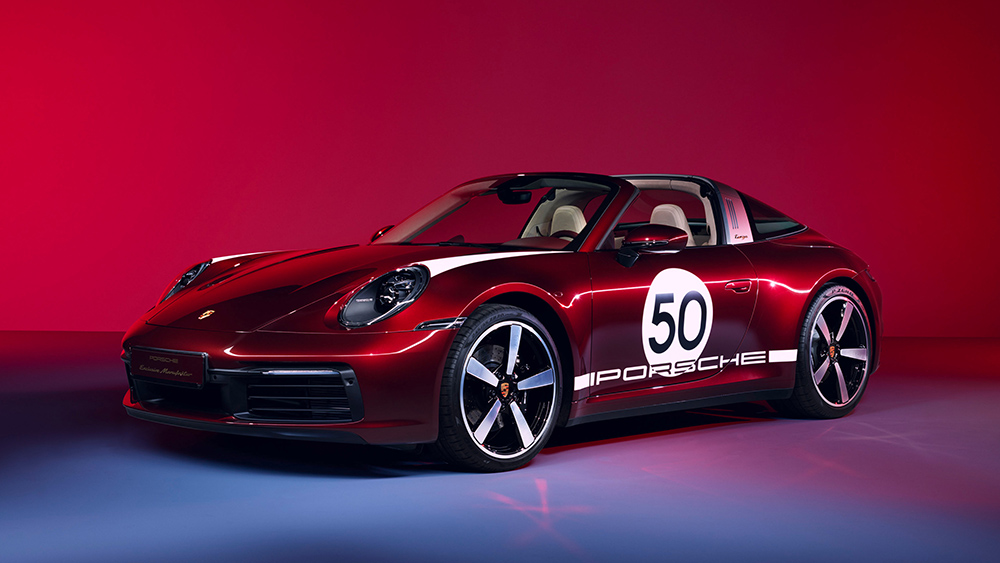 It’s never too early for an exclusive version of anything. Just ask Porsche, which has followed up last month’s unveiling of the 911 Targa 4S by debuting the retro-themed Heritage Design Edition variant of the open-top sports car this week.

Set to go on sale later this fall, the special 992-generation Targa 4S is specifically inspired by the marque’s racing success of the 1950s and ‘60s, the company announced in a press release. While the nostalgic variant is not inspired by any one specific speed demon, its design features a load of historical references to the era.

The first thing you’ll notice about the Heritage Design Edition is its racing livery-inspired paint job. While the example the brand chose to show off features a Cherry Red Metallic base, the car is also available in black, Guards Red and GT Silver Metallic. This is topped with a number of white design elements, including spears coming from the headlights, a Porsche stripe running along the bottom of the car between the front and rear wheels and a large white door circle with a starting number of your choice.

But the vintage design touches don’t stop there. The hood and hub covers feature the same crest the brand used back in 1963. The rear lid also features a Porsche Heritage badge inspired by the one that was given to Porsche 356 drivers who eclipsed the 100,000 kilometer mark. The car’s silver Targa bar has gold badging while the car’s wheels are designed to mimic the classic Fuchs design.

Inside the car, you’ll find that the interior has been done up in duo-tone leather, with beige paired with either black or burgundy. The seats and door trim feature corduroy fabric and the 1963-style crest makes an appearance on the headrests and steering wheel. Meanwhile, the instrument panel is illuminated in green like on the 356, and the Sports Chronograph dial is the same as the one featured on the watch that accompanies each Heritage Design Edition.

While the car’s exterior and interior have been given a tasteful reworking, Porsche has seen fit to leave the Targa 4S’s innards alone. And with good reason, since the car is powered by a twin-turbocharged 3.0-liter flat-six engine mated to an eight-speed PDK dual-clutch transmission that churns out 379 horsepower and 331 lb-ft of twist. Unfortunately, it doesn’t look like the standard version’s manual transmission option is available.

While the 2021 Porsche 911 Targa 4S Heritage Design Edition won’t arrive in dealerships until the fall, the car can be ordered now. Limited to a run of just 992 examples—a number that matches its internal model series code—the car starts at $181,950, which is $45,000 more than the standard Targa 4S. If you miss out, though, don’t worry; the automaker plans to release three more Heritage Design Editions in the future.