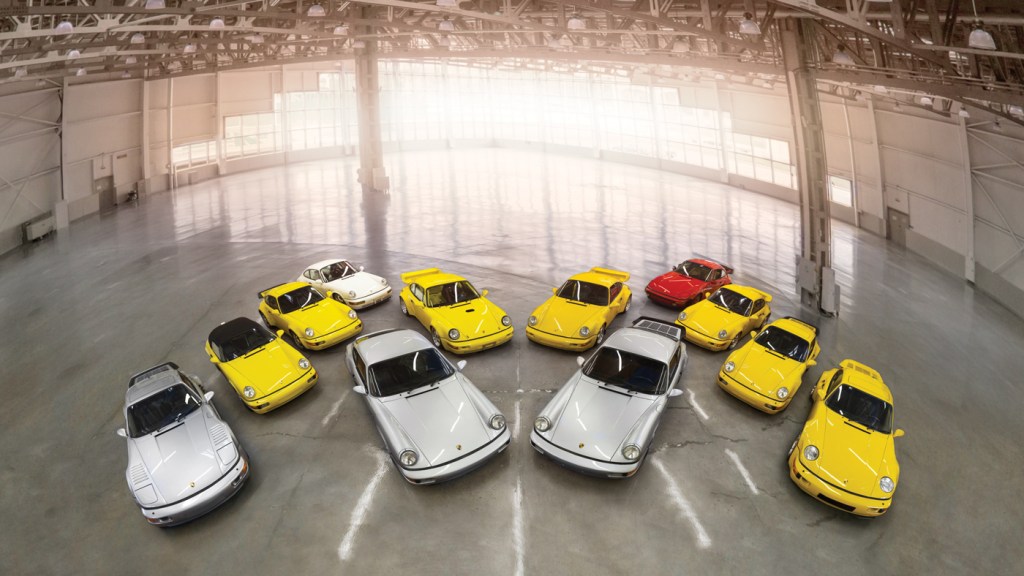 For a while there, the Porsche 964 model of the early 1990s suffered from a bit of an ugly duckling syndrome. While unquestionably a worthy descendant of the decades-long air-cooled 911 family, the 964 variant (1990 to 1994) lacked the re-engineered and praised suspension of its successor, the 993 (from 1995 to 1998), while wearing too-smooth sheet metal when compared to its muscled progenitor, the G-Series (1973 to 1989).

But no longer. With collectors’ love of all air-cooled 911s continuing to spike, the 964 is being lauded for everything from its Thor-like chassis to its iconic lines. Nowhere is that passion more evident than in a stellar collection of 11 special 964s (and one 1989 G-Series Turbo flat-nose coupe) that RM Sotheby’s will auction off at its Amelia Island Sale in Florida on March 10.

This silver X83 is one of only 10 examples produced by Porsche.  Photo by Patrick Ernzen © 2017 Courtesy of RM Sotheby’s.

“What’s on the rise in Porsche circles now are cars of exceptional rarity and condition, and this gentleman had the foresight to get all that early on,” says RM Sotheby’s specialist Alexander Weaver, himself a 964 owner. “For most of these cars, which were offered in Europe or Japan, people here [in the United States] didn’t know what they were unless they really knew what to look for.”

Now that a 1993 model has hit 25 years of age, it doesn’t fall victim to U.S. Department of Transportation import rules, which means that these rest-of-the-world Porsches will increasingly find their way into the garages of stateside collectors.

“Simply put, very limited 964s are now some of the hottest cars you can buy,” says Weaver. “The appreciation for this model is surging.”