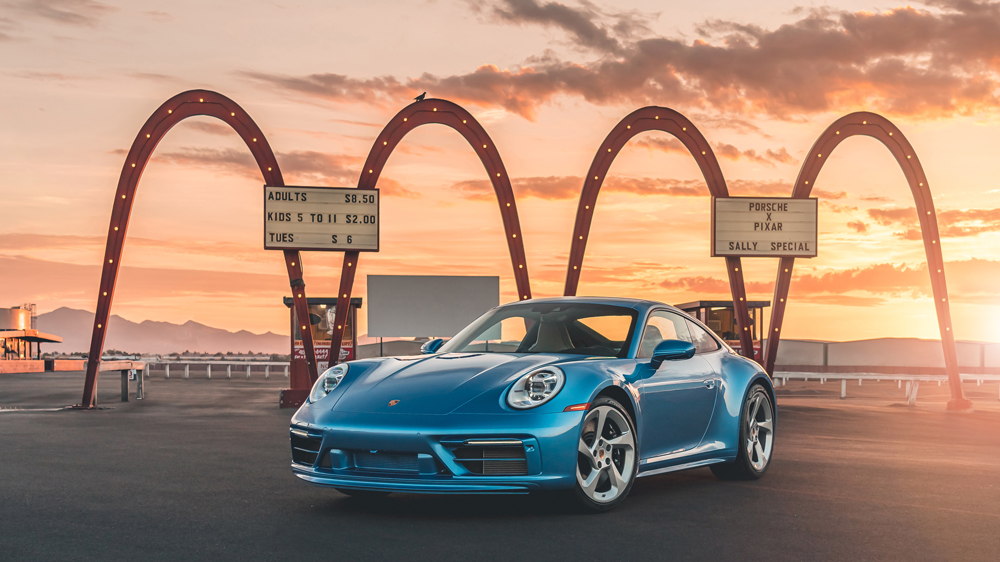 Only a few months after Porsche and Pixar promised a modern, real-life Sally Carrera at the South by Southwest festival in Austin, Tex., the car is ready to hit the auction block next week through RM Sotheby’s at the Portola Hotel in Monterey, Calif., as part of this year’s Monterey Car Week. Unlike the original Sally model used to promote the Pixar film Cars, this example is the result of Porsche’s Exclusive Manufaktur division working with Pixar’s Jay Ward and Bob Pauley to bring Sally to life in the form of a current-generation 911 Carrera GTS that exudes the spirit of Sally without looking cartoonish.

“This time we weren’t going to make a car with eyes,” Pauley told Robb Report during an interview ahead of the vehicle’s public announcement. “This isn’t a character, this is a street-legal car inspired by Sally in the details.”

The first Sally Carrera (left) was made for promoting the “Cars” movie, while this new version is a street-legal interpretation of its namesake character.  Porsche Cars North America

Those details include a special paint dubbed Sally Blue Metallic, which had to be mixed and applied by hand. Many of the exterior elements that are done in black on the standard 911 are painted body-color on Sally, including the rear diffuser and slats on the rear engine cover.

“The 992 has many more black surfaces, and by painting many of these it gives the car a bespoke element,” says Grant Larson, Porsche designer and director of Special Projects for the marque. “It’s breathtaking because it really feels like Sally,” Pauley adds. And when the rear wing is up, you can even see Sally’s “tattoo,” the same found on the namesake character in the film.

The Sally Special is Inspired by the animated character Sally Carrera from “Cars” and built from a Porsche 911 Carrera GTS.  Porsche Cars North America

In addition to the special paint, Larson worked with Pauley and Ward to create a new, exclusive wheel design that is a modern take on the 996 Turbo wheel. “We interpreted some of Bob’s sketches of the wheel, and it was a perfect reinterpretation of the 996 but more fitting to the form language of the 992,” says Larson.

The Sally Special is powered by a flat-six engine that makes 473 hp and is fitted with a seven-speed manual transmission. Options include rear-axle steering, a front-axle lift system (to clear steep driveways and speed bumps), and an extended-range fuel tank.

When the rear wing is up, you can see Sally’s “tattoo,” found on the original car in the film.  Porsche Cars North America

The interior is also fully customized, with Pepita upholstery done in Speed Blue, Chalk and black. “When she left the standard production line, everything from the interior was pulled apart and refined,” Larson says. “Nothing was left untouched.” This includes a sketch of the original Sally on the dashboard with the designation that the vehicle is one of one. Larson also mentions that the car has more than 35 options from Porsche’s Sonderwunsch customization program.

While Porsche isn’t giving an estimate for the Sally Special’s value, a current 911 Carrera GTS with a custom, paint-to-sample exterior color and Exclusive Manufactur leather interior, as well as many of Sally’s options, balance out to well over $200,000. According to some customers, the Sonderwunsch features can add as much as $100,000 to that cost. Then again, Sally isn’t something you could ever configure yourself.

“There’s really no way to put a price tag on this,” Ward says. And it isn’t only the options that make Sally special. Larson notes that many Porsche employees and suppliers donated their time and materials along the way. “We hope whoever wins it will want to drive it,” says Ward. “We specced it selfishly for ourselves.”

Unique touches include a sketch of the original Sally on the dashboard with the designation that the vehicle is one of one.  Porsche Cars North America

Sally will go under the hammer as lot No. 332 on Saturday, August 20. Proceeds will go to both Girls Inc., an advocacy group for girls and young women, and the USA for UNHCR, the UN Refugee Agency providing aid to children and their families affected by the conflict in Ukraine.

Click here to see photos of the Sally Special developed by Porsche and Pixar.