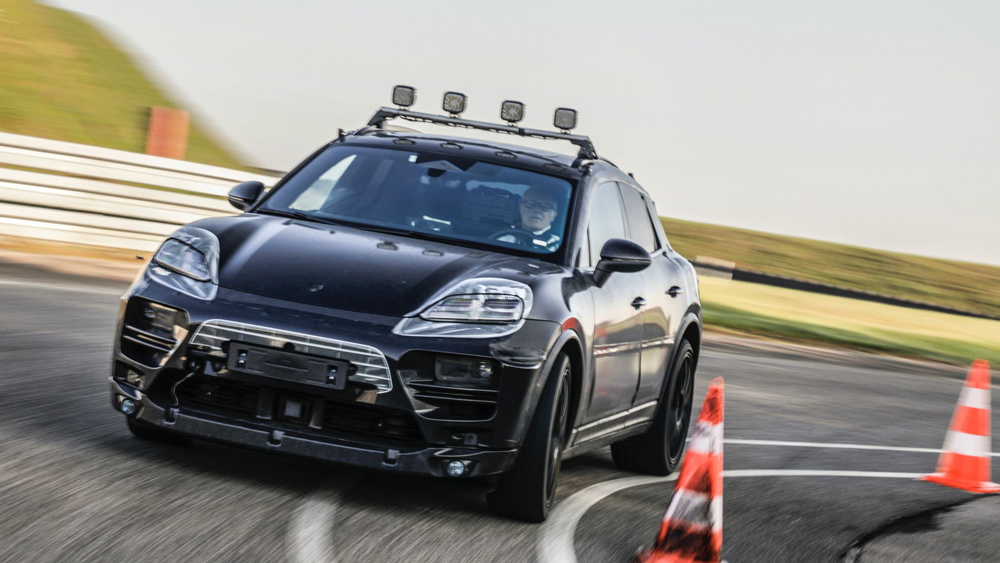 With the Taycan Turbo S, Porsche’s first production dive into the electric-vehicle pool last year made a huge splash, as the model boasts radical looks, blistering performance and a price tag pushing $200,000. That was by design, as word was that the halo car would soon be followed by the far more practical and affordable Macan EV. And now, that battery-powered SUV is indeed hitting the road.

Porsche announced this week that after many months of intensive virtual testing of computer-generated Macan EVs, camouflaged versions of the company’s Cayenne cousin will step up their real-world road trips to keep the marque on track to deliver its second electric model to consumers by 2023.

“Testing in a real-life environment is now getting underway, one of the most important milestones in the development process,” noted Michael Steiner, a member of Porsche’s Executive Board, Research and Development, in the company’s official statement. He also mentioned that before the Macan EV gets approved for production, a number of prototypes will have logged around 1.8 million miles.

The on-road phase of the Macan EV development process is critical to refining and testing vehicle design and dynamics that, to date, have been created largely by computer. Through accumulating miles, both on Porsche’s test track at Weissach as well as on public roads in extreme weather conditions, the highly disguised Macan EVs will offer proof of concept and avenues for engineering improvements.

Such testing is particularly critical for Porsche, an automaker whose name has long been associated with both racing successes and cars that are all about driver involvement. “Endurance testing on closed-off testing facilities and on public roads in real-life conditions is still indispensable to ensure that the vehicle structure, operational stability and reliability of hardware, software and all functions meet our high quality standards,” Steiner is also on record as stating.

While it seems the Macan EV will not get a name change, its look may vary slightly from its internal-combustion stablemate. Porsche notes that engineering work on 20 digital prototypes has focused on subtle aerodynamic adjustments to meet the cooling needs of a vehicle powered by batteries and electric motors.

While gas-powered cars can operate at temperatures of up to 250 degrees Fahrenheit, electric vehicles have components that prefer operating temperatures closer to 100 degrees or lower in order to provide optimum performance and useful range. The Macan will feature the same 800 v architecture as the Taycan, which currently offers a range of around 200 miles, as compared to some Tesla models that claim to approach 400 miles. With the Macan EV being a utilitarian family hauler, Porsche may be aiming for a range well north of what the Taycan delivers.

Before real-world testing commences, a seat box is used to replicate the driver experience.  Photo: Courtesy of Porsche AG.

There are also hints that the Macan EV may feature a unique interior. Porsche reports that it has built a mock interior using real seats and digital screens in order to work on the instrument-cluster interface. Some of those refinements could well make their way into a face-lifted version of the conventional Macan that comes to dealerships later this year. Porsche says the gas-powered Macan will continue to be offered even when the EV variant hits the market, an acknowledgement that while EV sales are inching up, they still account for just a fraction of new-vehicle purchases.

The on-road phase of the development process is critical to refining and testing vehicle design and dynamics.  Photo: Courtesy of Porsche AG.

While the Taycan represents a compelling challenge to the segment-dominating Tesla Model S, the Macan EV is arguably an even bigger move for the legendary maker of the 911. It represents the first of Porsche’s Premium Platform Electric models, allowing the company to join a growing host of both mass-market and high-end auto manufacturers who have committed to electrifying much, if not all, of their lineup in the years to come.