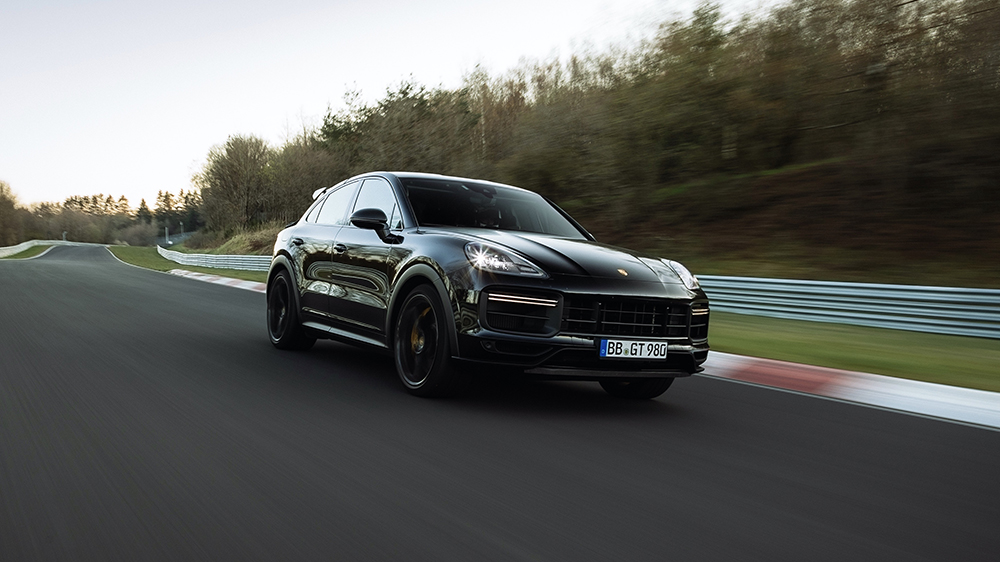 The Porsche Cayenne was already one of the fastest SUVs on the road. Now, it’s a record breaker.

The German luxury marque has just announced a new, high-performance variant of the nearly 20-year-old model. We don’t know its name or technical specs just yet—though Porsche promises they’re coming soon—but we do know that it’s the fastest SUV to ever circle the legendary Nürburgring Nordschleife.

That record was set just days ago, on June 14, according to the automaker. On that day, test driver Lars Kern piloted a lightly camouflaged example of the new Cayenne around the German track in an astonishing 7:38.925 minutes. That’s right, Kern managed to push an SUV around the famously punishing 12.94-mile circuit—which is known among enthusiasts as the “Green Hell”—in just over seven-and-a-half minutes. That time was then certified by a notary and now stands as the new, official Nürburgring record for a “SUV, off-road vehicle, van, pick-up.”

Porsche wasn’t ready to reveal the variant’s specs just yet, but it did reveal that it will be based on the Cayenne Turbo Coupé. That SUV has a twin-turbocharged V-8 that can generate a very robust 541 horses and 567 ft lbs of twist. We expect the new Cayenne will deliver more than 600 horses and a zero-to-60 time that will rival that of the high-performance 992-generation 911 GTS (3.2 seconds), which is one of the marque’s fastest production vehicles of all time.

“This Cayenne model is a top performer,” Cayenne line vice president Stefan Weckbach said in a statement. “During its development, we focused on exceptional on-road performance. Our record-breaking Cayenne is based on the Cayenne Turbo Coupé, though more systematically designed for maximum longitudinal and lateral dynamics. Its record time on the Nordschleife confirms the dynamic capabilities of our new performance SUV. Furthermore, it’s a typical Cayenne all-rounder, providing a high degree of driving comfort and everyday utility.”

No release date—or even official debut date—has been set yet, but we expect one will be announced soon. If you’ve ever wanted to an SUV that can also hold its own on the track, it sounds like this could be the ticket.