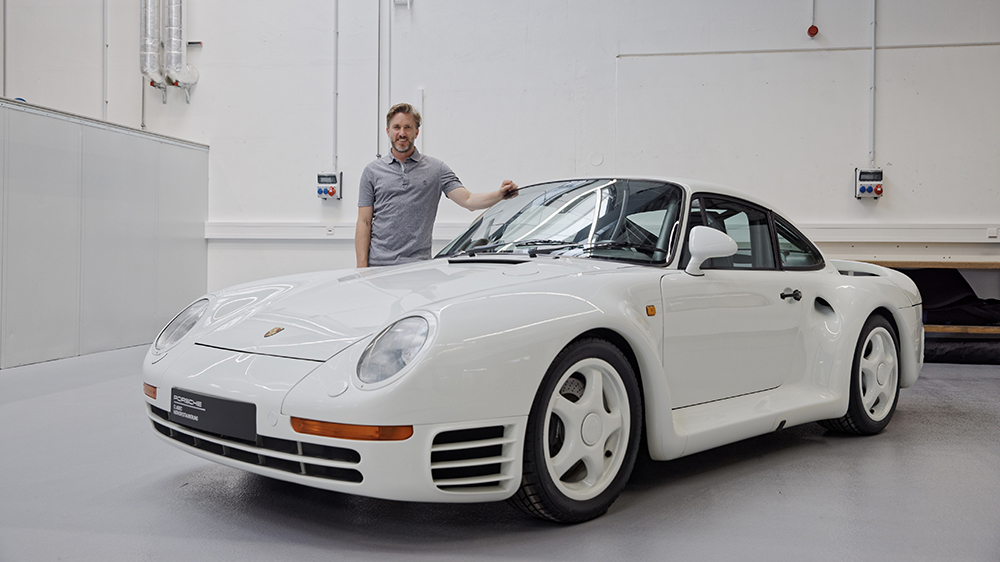 Sometimes if you want a car restoration job done right, you have to turn to the people who built it in the first place.

That’s why former Formula 1 driver Nick Heidfeld called on Porsche Classic to freshen up his beloved 1987 959 S. The entire process may have taken the marque’s heritage division four years to complete, but the all-white example of the 1980s supercar looks to have been successfully returned to its former glory.

It makes sense that Heidfeld owns a 959, since it is, for all intents and purposes, a street-legal Class B rally car designed to meet FIA homologation regulations. The two-door coupé packs a 2.8-liter twin-turbocharged flat-six that generates 444 hp and 369 ft lbs of torque and was one of the first high-performance vehicles to feature all-wheel drive. Thanks to this setup, the 959 was capable of hitting a top speed of 197 mph, making it the world’s fastest production vehicle when it was introduced in 1986. The stripped-down, track-focused 959 S, or Sport version, took things even further, with bigger turbochargers pushing output to 508 horses and its top speed to 211 mph. The car isn’t just an engineering marvel, though. It’s also one of the rarest series production Porsches of all time. Only 292 examples of the car were built during the six years it was in production, of which only 29 are Sport variants.

Porsche Classic worked from the summer of 2017 until December of last year restoring Heidfeld’s 959 S to 1987 specification. The finely tuned machine has just 2,599 miles on the odometer, meaning its mechanical bits were in sorry state after three-plus decades. Because of this, Porsche engineers had to revamp it powertrain and chassis. The vehicle’s Motoronic engine management system was also modified before Heidfeld acquired it, so it had to be restored to its original state. The car also looks to have been thoroughly detailed, with its blinding white exterior and gray interior looking brand new.

“I’ve had the privilege of driving many high-performance cars, but driving this high-tech legend is something special for me,” Heidfeld said in a statement. “I was a teenage car fan in the late 1980s, and to me this Porsche was always extraordinary. At the time, the 959 was the fastest production car in the world and by far the most advanced. So even today, it doesn’t drive like a 30-year-old car, but like a much more modern vehicle.”

The restored 959 S isn’t the only Porsche in Heidfeld’s garage. The driver, who claimed 13 podiums during his 11-year F1 career, also owns a 996-generation 911 GT2 and a Carrera GT. If either of those cars is ever in need of some serious work, he knows exactly who to go to for help.

Check out more images of Heidfeld’s 959 S below: