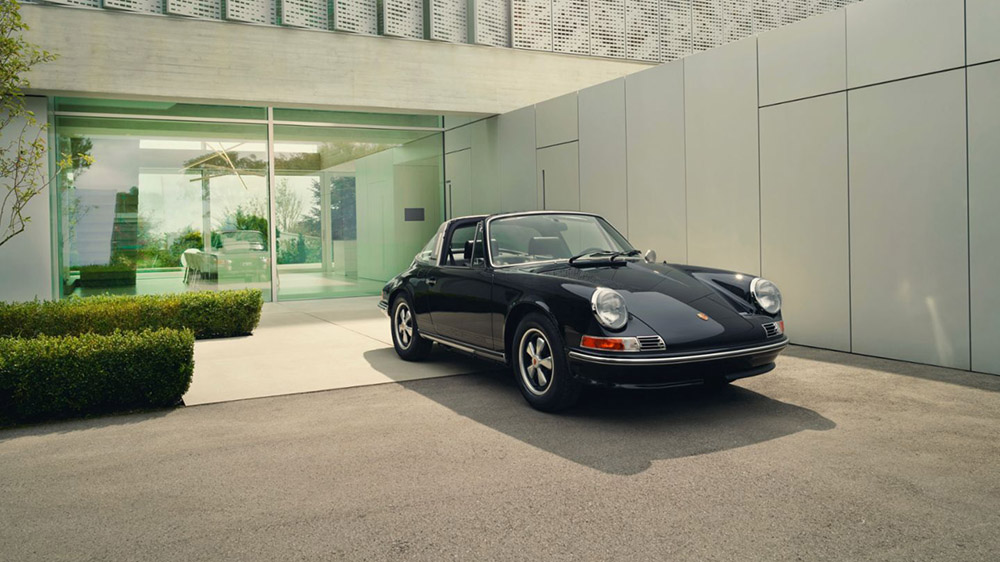 That didn’t stop Porsche Classic, though. The team at Stuttgart recently restored a 1972 911 S 2.4 Targa to perfectly match Porsche Design’s first commissioned timepiece. Even better, the coordinated car and watch will be auctioned off by RM Sotheby’s this winter.

Porsche Design was founded in 1972 by F. A. “Butzi” Porsche. He was the grandson of the automaker’s founder, Ferdinand, and also the designer of the 911. The lifestyle brand is its own independent entity, but the two companies have been closely linked since the beginning. In fact, Porsche Design’s first watch, the Chronograph 1, was commissioned by the marque as a gift for its best customers and employees.

It was the lifestyle brand that approached the automaker’s heritage division about working on a special project for its 50th anniversary. The most famous version of the 911 is the coupé, but Porsche Design decided to go with the semi-convertible body style for the build, according to Porsche Classic’s head of factory restoration Uwe Makrutzki. A dilapidated red donor car was located, and work on the car commenced.

After two long years, the one-of-a-kind 911 is complete. The Chronograph 1 was the world’s first watch with an all-black matte case—a nod to the car’s non-reflective dashboard—so after the donor was completely disassembled and treated for rust and corrosion damage, its body was painted solid black. All accent work, including the trademark roll bar, has been finished in high-gloss platinum. The Fuch wheels, meanwhile, look nearly identical to the winding rotor that’s visible through the clear caseback of the anniversary-edition timepiece. The Targa lettering has also been painted matte black, while the engine covering is topped with a “Porsche Design 50th Anniversary” badge that includes a reproduction of Butzi’s signature.

Just as you’d expect, the color scheme carries over to the interior. It’s broken up only by black-and-gray Sport-Tex checkered flag upholstery on the seats, door padding and dashboard. The passenger side of the dash also is also adorned with another anniversary badge.

Porsche Classic gave the car a performance upgrade, as well. The engine in the entry-level 911 T could produce 130 hp, but it was replaced with a more potent mill from the S-spec version of the vehicle. Although the engine is the same size, it’s now capable of generating a vastly improved 190 horses. The chassis and brakes were also replaced with those from the S-spec 911.

“Unlike any regular restoration project, the goal wasn’t to rebuild the car as close as possible to the original,” Roland Heller, Porsche Lifestyle Group’s chief design officer, told Robb Report. “In honor of our company’s founder, the philosophy we applied was to restore this unique sports car the way F. A. Porsche would have built it today—and a major inspiration for the restoration was the Chronograph 1 and its minimalist black design.”

Unlike most one-off rides, you’ll actually get a chance to own the anniversary-edition 1972 911 Targa. The car and a unique example of the Chronograph 1 engraved with its VIN number will be put up for auction later this month via RM Sotheby’s. You’ll have from November 29 to December 14 to bid on the duo, which is expected to sell for between $275,000 and $375,000. What better holiday gift for the Porsche lover in your life?