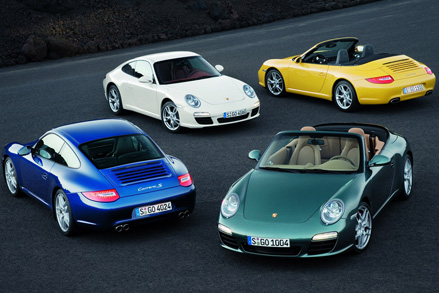 You may have to look twice to discern the changes to the Porsche 911 Carrera and Carrera S Coupe and Cabriolet for the 2009 model year; the big news lies beneath the skin. There are new LED driving lights on a restyled front bumper and bright LED tail lamps at the rear, along with bold oval exhaust outlets for the Carrera and four round tips for the Carrera S that not so subtly trumpet improved power from the horizontally opposed six-cylinder engines. Now equipped with direct fuel injection for sharper response, enhanced efficiency, and lower exhaust emissions, the Carrera’s 3.6-liter six enjoys an additional 20 horses, for a total of 345, while the S-spec 3.8-liter engine jumps by 30 horsepower, to a stout 385.

More notable, however, the 2009 911 Carrera and Carrera S are the first models to offer Porsche’s lightning-quick double-clutch automated manual transmission. Dubbed the Porsche-Doppelkupplung (PDK), the seven-speed gearbox supplants the long-serving six-speed Tiptronic S manu-matic. It employs a servo-operated dual clutch pack that can anticipate and preselect the next gear before the current gear is disengaged. When an up- or down-shift is ordered—by the computer in automatic mode or by the driver in manual mode, via switches on the steering wheel—the process is as simple as opening the first clutch and closing the second. This allows near-instantaneous gear changes, with no discernable interruption to the flow of torque during acceleration. In the Carrera S Coupe, the PDK gearbox helps enable a 4.3-second sprint to 60 mph—two-tenths of a second faster than a car equipped with a six-speed manual transmission.