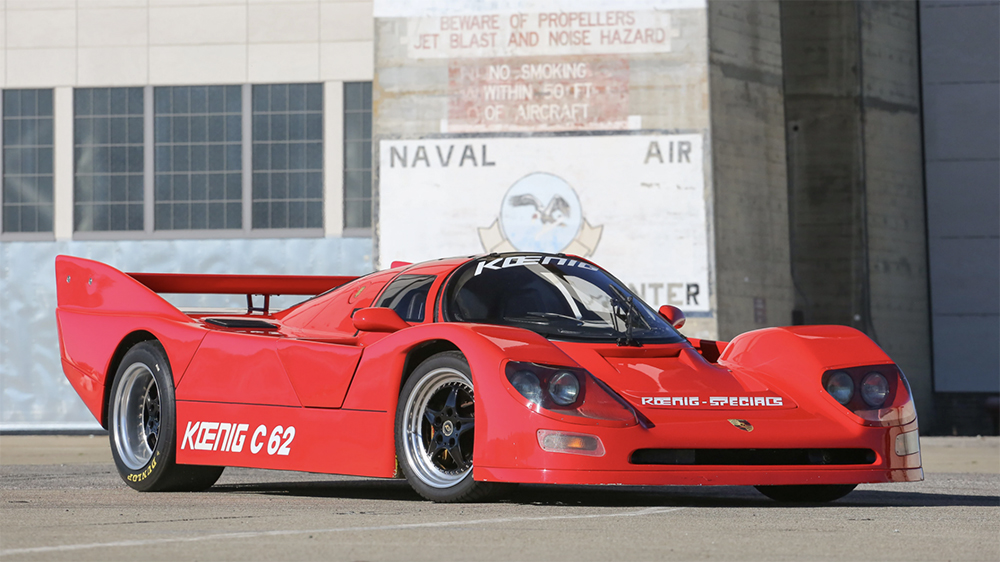 You could soon own a street-legal version of the car that helped Porsche own endurance racing during the ‘80s and early ‘90s.

An ultra-rare 1991 Porsche Koenig Specials C62 was just listed for sale on Issimi. The outrageous-looking speed machine may not be in mint condition, but it’s hard to think of a better car in which to recreate the feeling of racing at Le Mans.

Porsche racers took home the top prize at the 24 Hours of Le Mans every year from 1981 and 1987. Much of this dominance can be traced to two cars, the 956 and its successor, the 962. Although the 962 didn’t take home as many checkered flags at the race as its predecessor (the 956 was responsible for four wins, and the 962 claimed two), it was a genuine force until rule changes brought its time to an end. With its racing days behind it, Porsche let a handful of companies, including Koenig, convert the remaining 962 prototypes for street use.

Koening, the German tuner, has a tendency to take a high-performance vehicle like the Ferrari Testarosa and make it even more extreme. And sure enough, that’s exactly what the shop did with the C62. Although it looks identical to the race car, it was completely re-engineered for street driving and to meet German government regulations, according to the listing. In fact, there is not a single shared body panel between the two vehicles.

Underneath the C62’s rear-positioned engine lid, you’ll find a 3.4-liter twin-turbocharged flat-six. That mill is mated to a five-speed manual transmission that sends power to the rear axle and can generate 550 hp, a number that was verified as recently as 2019. The car’s suspension has been completely redone and fitted with softer springs and dampers, while its racing-style brakes now feature more street-oriented pads.

Koenig had dreams of building 30 C62s, but only ended up producing three, of which this is the second. Since being completed in 1992, it’s spent much of its time in Japan, where it passed through a number of collector’s hands. Its current owner purchased it in 2019 and had it imported to the US. It’s been well-maintained and has just 1,555 miles on the odometer but, as Jalopnik points out, its body hasn’t been restored, which means there are some signs of wear and tear, like scrapes and chips.

Most surprising of all about this listing is the price tag: $995,000. While certainly not accessible, it’s less than the $1,030,000 the car cost brand new (which would be over $2 million in today’s money). It’s hard to call a car with a high-six-figure sticker price a bargain, but this actually might be just that.