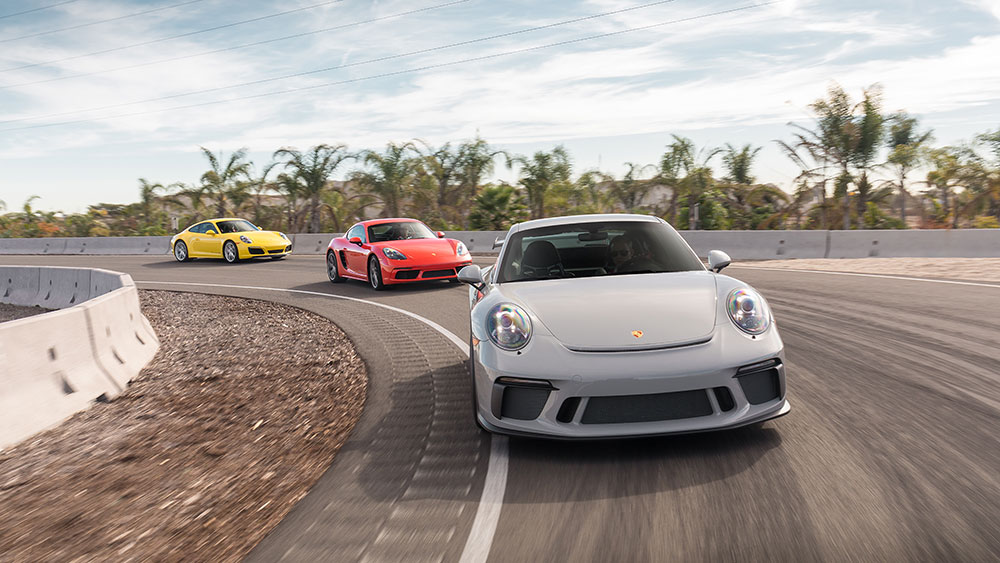 “I want you to drive forward and close your eyes just before the kick plate throws us sideways,” says Ricky Downton. I’m sitting in the driver’s seat of a Porsche 911 GT3, at one of the stations of the Porsche Experience Center in Los Angeles. Downton, my enthusiastic coach, explains that when we drive forward, a computer-controlled hydraulic plate will pop up underneath us and put our GT3 into a spin. The goal is to catch the slide by countersteering as fast as possible. “Reacting quickly is easier with your eyes closed,” Downton promises, grinning at my bewildered face.

Driving instructors proselytize proper eye placement, constantly commanding you to look up, through a corner, engraining the truth that your hands—and subsequently the car—will follow your eyesight. While Downton’s orders to drive blindly now seem counterintuitive, heeding the former racing driver’s feedback thus far had rewarded me with significant gains on the 1.3-mile handling circuit. And so I aim the $161,000 supercar towards the kick plate, force my eyelids shut, and say a tiny prayer.

The plate kicks our tail to the right, and I hurry to snap the steering wheel around, in the direction of the sliding rear. I feel the car hook up and let out some of the lock while Downton emits a yelp of victory. “See? That was textbook,” he beams as I open my eyes. “Also, your fastest pass yet,” motioning to a digital speedo beside the station, registering 27 mph. My three prior runs had ended in failure, with the GT3 pirouetting down the water-soaked concrete patch, so the success felt well-earned. “Let’s head back to the main handling circuit,” Downton says.

The driver development track runs around the outside of eight modules of the Porsche Experience Center. It’s an expansive and impressive 53-acre complex, nestled just off the 405 freeway in Carson, Calif. It’s equidistant from all of Los Angeles’ major airports, and the whole shebang cost $60 million to build and develop. There’s a fine dining facility in one wing of the main building, and the other side houses Porsche Motorsport North America, the only spot in the United States authorized to work on modern—and historic—Porsche race steeds. A glass wall allows you to watch the tradesman work on the likes of 911 GT3 R engines, and the whole space is open to the public.

The experience center offers a number of driver programs across the full breadth of Porsche vehicles, available to all, regardless of Porsche ownership. There’s an off-road course, where you can test the grit and mettle of Cayennes and Macans, or you can opt to push a Panamera, 718 Boxster or Cayman on paved surfaces. Prices start around $400 for most of those vehicles, but the greatest fun you’ll have will come from flogging the beauty from Flacht, the 911 GT3. Behind your head, a sonorous 4.0-liter naturally aspirated flat-six awaits, crammed with 500 horses that’ll rip you to 60mph in 3.4 seconds.

That program starts at $895 for 90 minutes, and the curriculum is custom, up to you and your driving coach. Downton inquired about my level of track experience (intermediate) and probed about what I wanted to focus on for our session (threshold braking, please). We start on the main circuit, and Downton explains that it’s not a traditional track, per se, but built to emulate the ideal country road, with undulating, off-camber corners, some tight twists, and two hairpins. “You’ll always be busy out here, especially in this,” he says, tapping the GT3’s leather-drenched dash.

Indeed, my hands are always moving. Downton talks me through a recon lap, showing me the lines, visual markers for apex points, track out points, and brake zones. After one spin around, he feels comfortable enough with my abilities to tell me to pick up the pace. We hustle around, me trying to string the corners together fluidly, Downton pointing out my various errors, articulating why and how the car is responding the way it is. Around one hairpin, I feel like I carried too much speed into the turn and start to lift off the throttle. “Careful, you’re going to—” is all Downton’s able to get out before the snap oversteer. “The GT3 is so perfectly balanced that it gets very upset if you’re lifting mid-corner,” he explains. “Keep rolling some maintenance throttle through these corners to stay planted.”

We test out other stations, including the acceleration straight, where launch control rockets you down a 3/4-mile expanse before dumping you into a replica of the Karussell, the infamous banked curves of the Nordschleife. Across the infield, a 7 percent concrete slope with water jets mimics an icy hill descent, while a polished concrete mini-track behind it is covered with a soap-like substance to create a low friction handling course. Mastery would consist of connecting 20 mph drifts through each corner, and that requires the most precise and minor of inputs. I can string together one or two turns, but longer sequences prove elusive, though repeated attempts are undeniable fun.

“You could spend all day hopping between these stations, honing your skills,” Downton says, adding that his favorite thing to do is keep turning laps on the larger handling circuit. Can’t argue with that, especially when you’re piloting someone else’s GT3. The car is a dream to drive, and the technical track is a fine marriage. It’s definitely work and my back and brow are wet with sweat towards the end of our session, but Downton claims I’ve progressed even in our short stint. I skeptically retort he’s paid to tell everyone that, and he chuckles and points to the telemetry on the GT3’s infotainment screen. “Your lateral load has increased,” he replies. “Proof you’re going faster.”

We wrap up and I’m buzzing. Downton asks if I want a hot lap, though he knows the answer already. He disappears and returns behind the wheel of a different GT3, one he personally specced as part of a staff competition for who could build the better beast. “I went for the fire extinguisher,” he laughs, pointing at the red bottle mounted beneath my seat. “Put me over the budget by a few hundred, but it’s worth it.” He turns onto the circuit and guns it. The hot lap is bliss and Downton in his car, on his track, is the ultimate advertisement for the GT3. As we park, I inquire as to how many GT3 converts he’s notched on his belt. “About a dozen,” he grins.