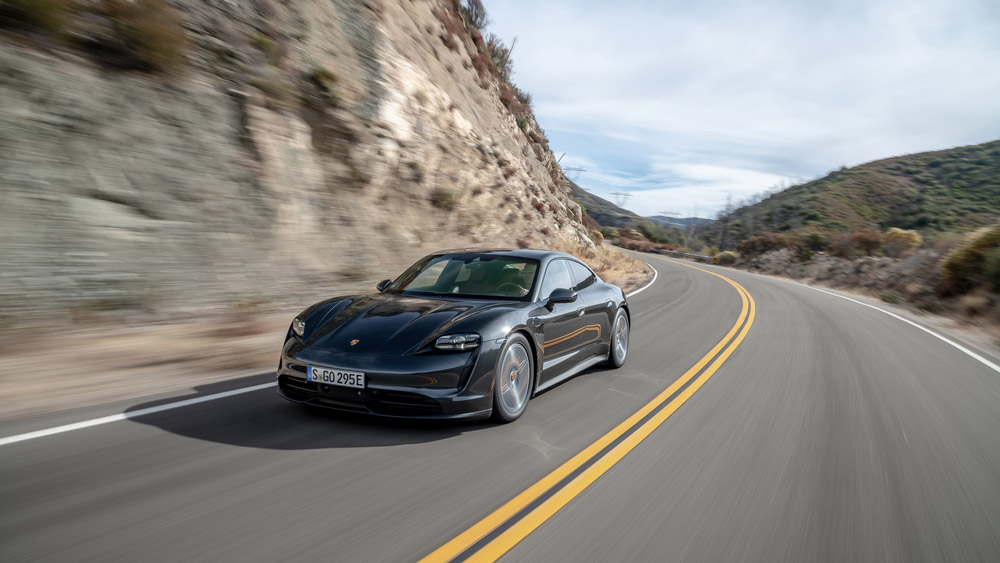 Porsche fans eager to go electric at a price point similar to the Tesla Model S now have their ride. The company has just announced that the 2020 Taycan 4S is making its way to dealerships in anticipation of customer deliveries. The sedan starts at $103,800, a significant price savings when compared to the $187,000 MSRP for the range-topping Taycan Turbo S that kicked off Porsche’s EV party last fall.

The entry-level Taycan is hardly that. While the Turbo S variant blazes to 60 mph in 2.6 seconds and the Turbo in 3 seconds, the 4S manages a respectable 3.8 seconds, which will be plenty fast for most commuters, whenever commuting comes back en vogue post coronavirus. The lower price point is achieved largely by replacing the Turbo S rear-motor inverter for a slightly detuned version. All Taycans come with the same front-mounted electric motors, and together front and rear units give the car its all-wheel-drive grip.

The Taycan 4S is powered by a 93.4 kWh Performance Battery Plus that supplies the sedan’s dual motors with up to 562 hp when using an overboost function and launch control. The car’s top track speed is 155 mph via a two-speed gearbox. The ever-critical range figure is 203 miles, which is actually up from the 192-mile range featured in the Turbo and Turbo S.

“The new Taycan 4S sits right at the heart of our electrified model line-up, delivering the effortless performance and engaging dynamics expected of a Porsche sports car with the space and connectivity that make it viable for everyday use,” says Klaus Zellmer, CEO of Porsche Cars North America, in the official statement.

The 4S accelerates from zero to 60 mph in 3.8 seconds.  Photo: Courtesy of Porsche AG.

As the nation gradually looks to reopen state-by-state, Zellmer says customers should check with their dealerships for details. But, he adds, there is always the option to get a new Taycan through contactless home delivery, part of the company’s “Porsche At Your Service” program aimed at providing consumers with more flexible ways to buy, receive and service their cars.

In many ways, Porsche is also shaping up to be the prime competitor to Tesla, which has to be hoping that a first-mover advantage in the EV space will continue to fuel sales for a range that includes the Model S sedan, Model X SUV, Model S small sedan and the up-coming Model Y crossover. With Porsche now offering an electric car that Model S owners can consider, the luxury EV sedan battle has been joined.

The Taycan 4S has a range of 203 miles.  Photo: Courtesy of Porsche AG.

For many consumers, price is second only to range anxiety when it comes to top EV concerns. Indeed, for those prioritizing range, one of Elon Musk’s models may get the nod, especially as his Tesla Model S Long Range now boasts a 390-mile range.

For Porsche diehards, however, having enough electric miles on hand to handle a daily commute or routine errands will be enough to close the deal on what most agree is an electric sedan that honors the renowned handling and acceleration traditions of the Zuffenhausen brand.