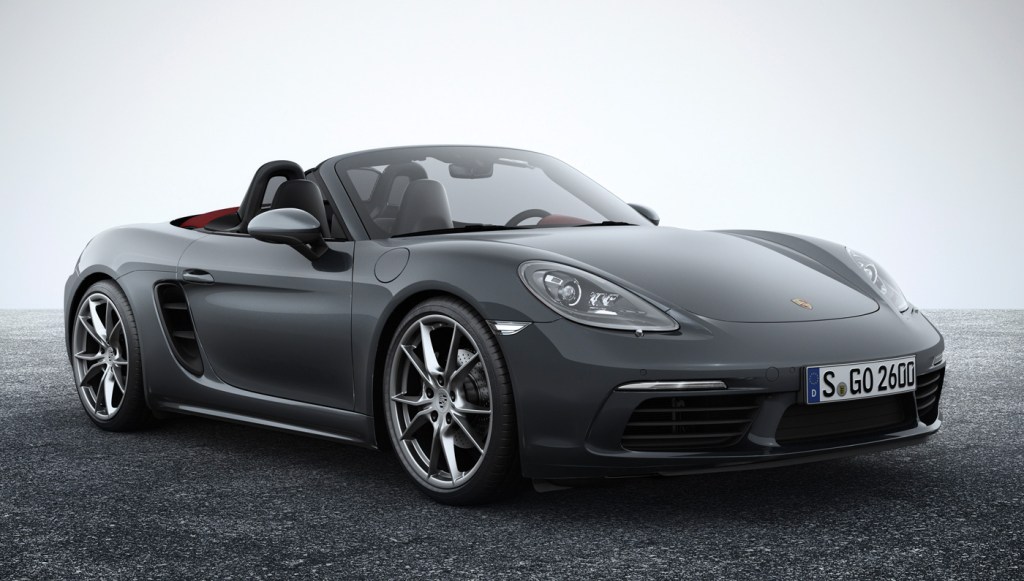 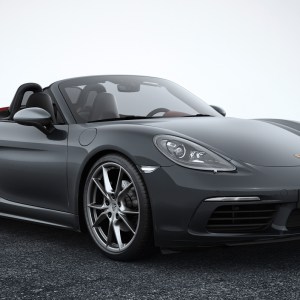 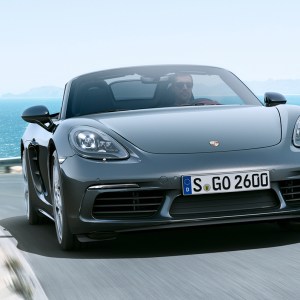 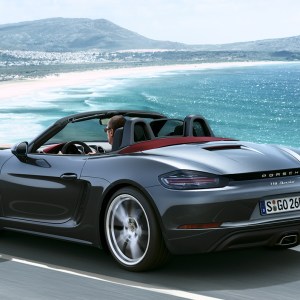 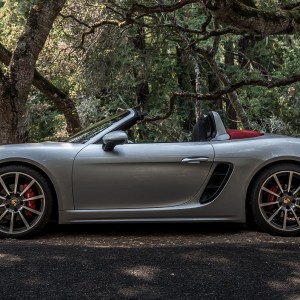 The top was down on the Porsche 718 Boxster S (porsche.com), allowing the hot Texas wind to blast against my face as I took a series of sweeping turns on Lime Creek Road. I was threading through rows of scrub brush along the shore of Lake Travis, about an hour’s drive northwest of Austin, in the high-powered version of the mid-engine roadster. Along with the base model Boxster and its hardtop siblings, the Cayman and Cayman S, the Boxster S has received a major overhaul for the 2017 model year. Most notable is the new, smaller engine. The cars also have the new 718 designation, which references the Le Mans– and Targo Florio–winning racecar that Porsche built from 1957 to 1962.

The Boxster and Cayman are nearly identical except, of course, for their tops and some suspension tuning, and they may be the most joyful offerings in the brand’s lineup. For each, Porsche has replaced the 6-cylinder boxer engine with a new turbocharged 4-cylinder boxer. A 2.5-liter 350 hp version powers the S models, and the base-model Boxster and Cayman have a 2-liter 300 hp version.

The power came on strong and smooth in the Boxster S, which has a starting price of $68,400. (The test car was equipped with about $25,000 worth of options; the base models’ starting price is $56,000.) Though the engine has two fewer cylinders than its predecessor, the car’s exhaust note retains its signature timbre.

In addition to installing a new engine in the 718 models, Porsche revised the chassis and suspension tuning to create a stiffer, more stable ride. “Our main goal is to have a wide spread of comfort and performance,” says Porsche chassis engineer Daniel Lepschi. Cars equipped with Porsche’s optional adaptive suspension have the broadest range, from a firm but compliant Normal mode to the rock-solid Sport and Sport Plus modes. A switch on the steering wheel changes the suspension setting.

The Boxster S test car was equipped with the adaptive suspension and featured the option that lowers the ride height by 2 centimeters, or about three-quarters of an inch. (The base models’ ride height can be lowered by 1 centimeter.)

In Sport mode, the Boxster S sliced through the sticky air and exhibited plenty of traction on dusty pavement, thanks to the optional torque vectoring. The feature uses braking and the locking mechanical rear differential to enable faster entries and exits into and out of corners.

The electronic steering system—the same one that Porsche uses for its new 911 models—is responsive enough to convert drivers who prefer hydraulic systems. An updated version of Porsche’s PDK dual-clutch transmission is an optional feature. The standard 6-speed manual includes a shifter throw and clutch pedal that are engaging without being too stiff. The manual gearbox doesn’t perform as well as the PDK, but its automatic rev matching, which comes with the optional Sport Chrono Package, eliminates the need for foot finagling to blip the throttle on downshifts.

Porsche has a long relationship with the boxer-4 engine, a 4-cylinder power plant whose pistons are set horizontally instead of vertically like those of an inline engine or diagonally like those of a V-8. Also known as a flat 4, it’s called a boxer because its pistons move in and out like the fists of a quick-jabbing fighter.

In 1950 the brand launched its first production car, the 356, and it was equipped with a boxer 4 based on the one Porsche had designed for Volkswagen during the 1930s. The 550 Spyder, which Porsche built from 1953 to 1956, featured a lightweight body and a 110 hp boxer 4. The car was dubbed the “giant killer” on the racetrack because it bested Jaguars and Aston Martins that were powered by larger 6-cylinder engines. The 718 of the late 1950s and early ’60s—the car for which the new Boxster and Cayman are named—also used a boxer 4.

Today’s boxer is more evolved than earlier versions, but it retains the same advantages over an inline or V-configured engine, says Markus Baumann, the manager of development for Porsche’s boxer engines and a 21-year veteran of the company. “It has a low center of gravity, more direct response, and that characteristic Porsche sound,” he says.

The engine in the 718 Boxster and Cay­man is exceptionally efficient, says Bau­mann. Many of its components are new, including the cylinder head and the direct-fuel-injection system, which carries out a new combustion process and a sophisticated new fuel-spray pattern. The engine now features forced air induction and a new water-to-air intercooler, both of which reduce its temperature. The biggest difference between this boxer and previous versions is the addition of a turbocharger. “Turbocharging is what allows us to achieve the same performance with fewer cylinders,” says Baumann.