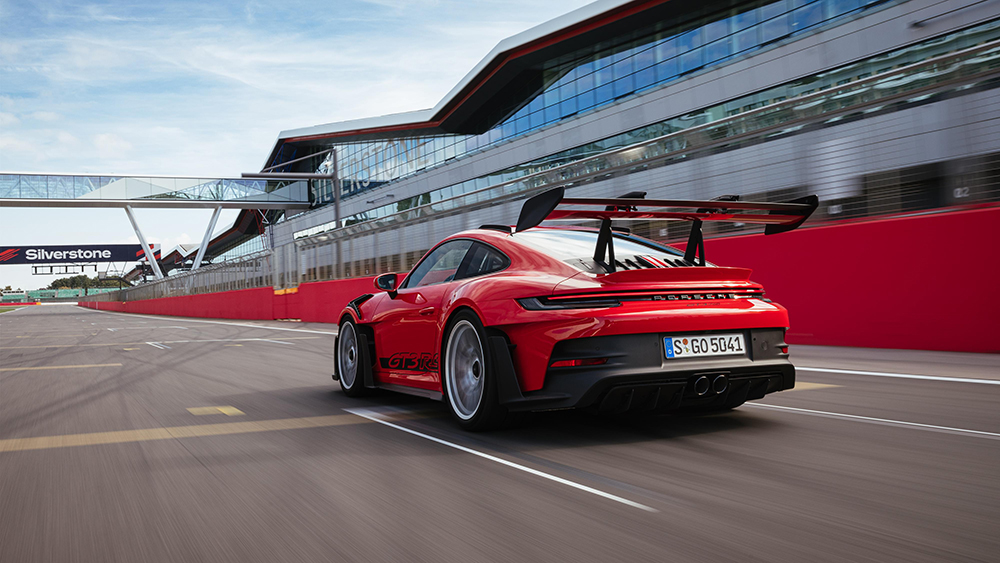 If you want to understand the story of the new Porsche 911 GT3 RS, just look at the wing—and, really, where else would you look?

The latest 911 variant had been rumored to receive a 4.2-liter mill, the same displacement as the feral GT3 R race car, but Porsche says the bigger engine wouldn’t have met emissions standards. So, to solve how to build a better sports car without boosting its brawn, the German marque leaned into the wind.

It’s here where we point out that the 518 hp, naturally aspirated 4.0-liter flat-six engine is no slouch, with a dizzying 9,000 rpm redline and six individual throttle bodies—inherited from the GT3—that provide a gratifyingly sharp response from the right pedal. But it’s an evolution of an existing engine, whereas the car’s downforce numbers compared to its predecessor’s might as well be from a different machine entirely.

At 124 mph, it’s producing double the downforce of the previous vehicle, and at 177 mph it has the equivalent of a Clydesdale (1,895 pounds) sitting atop its carbon-fiber roof.

But whereas downforce is great for grip, it robs a vehicle of straight-line speed. To solve that problem, the automaker engineered a Drag Reduction System (DRS) to automatically enable slipperier aerodynamics outside of corners by evaluating a matrix of parameters—including G forces, steering angle and suspension compression—and adjusting a section of the rear spoiler to finesse airflow accordingly. Two flaps beneath the nose work in tandem with the tail configuration to keep the air pressure level across the car, eliminating the teeter-totter effect. DRS systems are an integral part of modern Formula 1 cars, and it’s a neat trick to play Lewis Hamilton with the push of your left thumb, dumping rear-wing drag to overtake slower traffic.

A slew of other components, from a single radiator up front to roof fins designed to keep warm airflow away from the engine intake, work to leverage every last ounce of speed and athleticism from an already highly evolved platform—though managing these variables is serious work: Dials on the steering wheel control everything from the rear e-differential’s behavior to the compression and rebound settings at the front and rear suspension. Taken together, the result is heroic levels of grip—demonstrably more, in fact, than the current-gen GT3.

During a lashingly wet session at Silverstone circuit, in the UK, the lead instructor unceremoniously spun that very car off into the gravel even as the GT3 RS displayed remarkable adhesion, aided in no small part by Michelin Pilot Sport Cup 2 tires.

Yet while the GT3 RS’s wider stance and aggressive aerodynamics lend it an air of rock-solid stability at higher speeds, slower cornering reveals the usual vulnerabilities that arise from slick surfaces and cool temperatures—namely, a tendency to wiggle the hips when throttle is applied coming out of turns. But the car is reassuringly adept at scrubbing speed, reversing course with the DRS and transforming it into an air brake to drag the car back down to a standstill. It’s race-car-for-the-road technology at the highest level, a reminder that, for all its visual drama, the car’s unflappable driving bravado comes not from brute strength (the twin-turbocharged Porsche GT2 RS packs another 182 hp) but an uncanny ability to bend the air to its will.