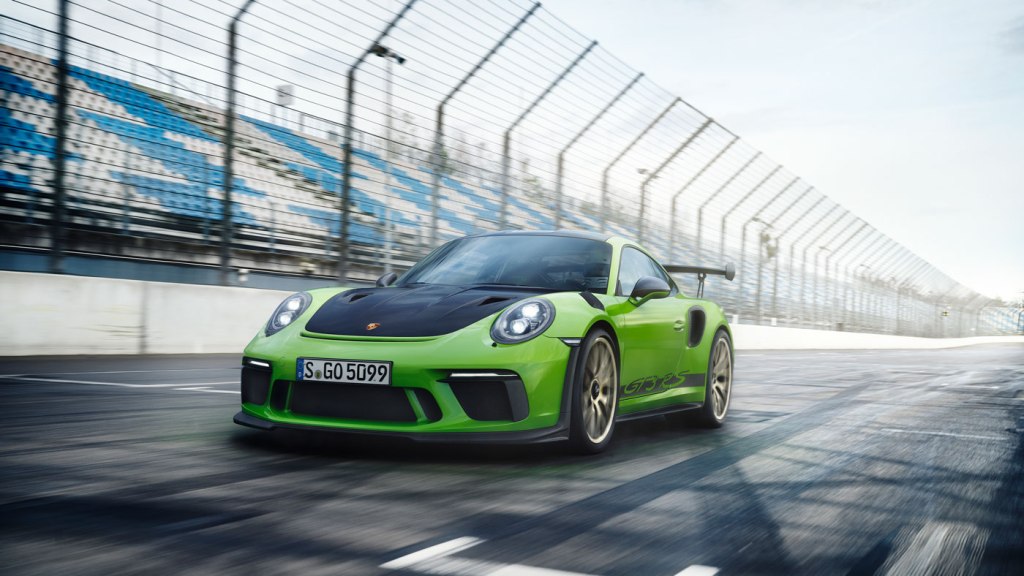 As predictable as the arrival of the 17-year cicada, the RS iteration of Porsche’s fabled 911 GT3 series is upon us. Announced at the Geneva Motor Show, but hardly a surprise to any Porsche acolyte, the fiercest version of the 991.2-generation 911 GT3 comes to the U.S. in short order as a 2019 model.

In a calculated effort to keep the excitement bubbling up around its GT cars, Porsche product planners have traditionally brought more purposeful—and powerful—track-honed versions of their so-popular-you-can’t-easily-get-one GT3 to market a year after the “base” model becomes a showroom sellout. Like the previous 991.1-generation 911 GT3 RS, which upped the ante on the 2015-2016 GT3, the latest RS is aimed squarely at the track. And while it can navigate city streets (the Front Axle Lift System is an essential option for that), its real raison d’être is racing—gentlemanly or otherwise.

Distinguished by a fixed rear wing only slightly smaller than a Dewey Weber longboard, the 911 GT3 RS is as radical-looking as a P-Car gets and is guaranteed to become a fanboy favorite in both chat rooms and video-game circles. But the real commotion will happen when weekend warriors and GT3-series competitors use the RS in the capacity for which it was intended.

Its engine is a 4-liter flat-6, altogether different from the 3-liter flat-6 that moves the turbocharged Carreras. It sounds different, too, thanks to a stratospheric 9,000 rpm redline and a snarling soundtrack that plays through a lightweight titanium exhaust.

The most powerful naturally aspirated, road-legal 911 ever makes 520 hp—20 up on the GT3 and GT3 Touring (this author’s favorite)—with 346 ft lbs of torque. With its 7-speed PDK transmission (unlike the GT3 and GT3 Touring, no manual is available), the rear-wheel-drive RS does a respectable zero-to-60-mph dash in 3.0 seconds, a scant .02 seconds quicker than its GT3 siblings. Of course, straight-line acceleration has nothing to do with this car’s mission, so focused is it on the racing circuit.

In addition to suspension and rear-wheel-steering geometry differing from the GT3, the RS uses carbon-fiber front fenders, a front trunk lid, and a magnesium roof panel to subtract weight. Front NACA ducts route air to the brakes for added cooling. A larger front spoiler lip and enlarged side skirts increase downforce, which, in conjunction with the massive rear wing, is twice that of a “civilian” GT3 at 124 mph. All of this is well below the terminal velocity of the RS, which taps out at 193 mph.

If anything has been dialed in, it’s the chassis dynamics, with PASM (Porsche Active Suspension Management) and PTV+ (Porsche Torque Vectoring Plus) included as part of the standard package. The tires are wider, and brake choices are PCCB (Porsche Carbon Ceramic Brakes) and plain old steel, for racers who don’t want to face the music when a carbon-ceramic rotor gets lunched. Inside, full bucket seats, lightweight glass for the rear and rear-side windows, and less sound insulation make things quicker by subtracting weight.

Unique to the GT3 RS is a special paint certain to appeal to herpetologists who fancy their Porsche in a reptilian hue. Beautifully bilious, “Lizard Green” is as becoming on the RS as it is on a male iguana, boasting its dominance over lesser saurians with a show of scorching color and an inflated dewlap. That same color can be specified on the fabric inserts of the lightweight bucket seats as well as on the contrast stitching details on the otherwise businesslike black interior.

Big-swinging so-and-sos will want to expose their optional Weissach Package, which Porsche’s press release says is “for particularly spirited drivers.” For $18,000, one gets numerous carbon-fiber bits, including the roof panel, front and rear sway bars and coupling rods, steering wheel trim, and shift paddles. An additional $13,000 buys lightweight gold-toned magnesium wheels that would make Liberace proud. MSRP is $187,500, plus delivery—not including the boundless options serious addicts will likely inject into the final build.