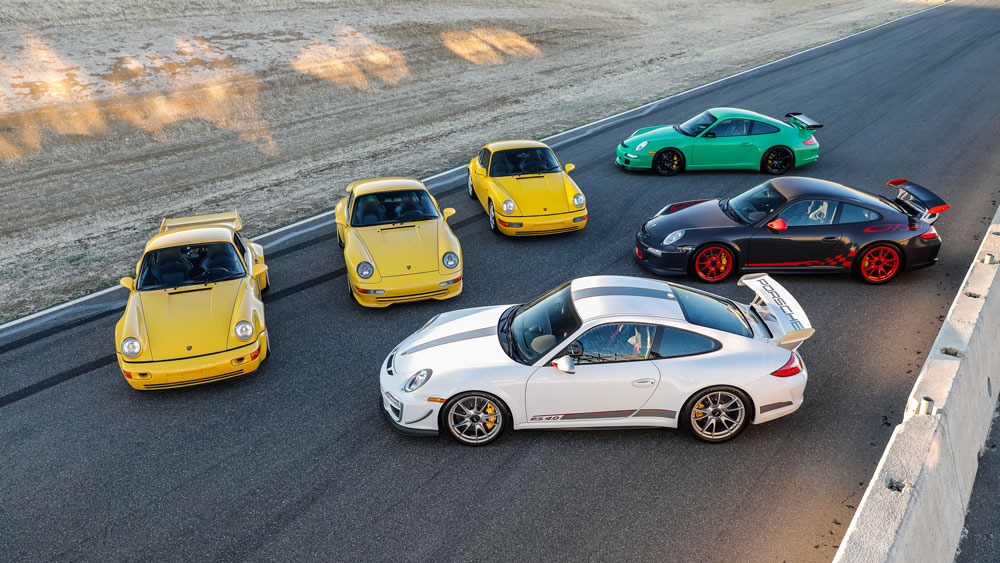 Collector appetites for classic Porsches appear insatiable, and while air-cooled models have thus far commanded the highest prices and esteem, some noteworthy contemporaries are stepping into the spotlight. Gooding & Co., one of the world’s most reputable automotive consignment houses, is presenting a few such examples as part of Jan Koum’s compelling collection. Robb Report has the exclusive scoop ahead of the Amelia Island Auction on March 8, 2019.

Predecessor to the iconic 993-generation Porsche 911 and a distinct transition for the Carrera’s design and engineering, the 964 is a gemstone for discerning enthusiasts. The particular examples being offered—both adorned with RS badging—are among the rarest of the breed. One of just 1,910 examples, the 1992 Carrera RS was delivered new in Italy and ordered in paint-to-sample Blossom Yellow. More intriguing still is its sibling, a 1993 Porsche 964 Carrera RS 3.8 sold new in Japan and showing minimal mileage. Limited to just 55 models, the RS 3.8 is coveted as the ultimate track-honed 964.

Through progressive iterations, Porsche 911 GT3 RS models have become some of the most capable road-legal track cars on the planet. Gooding & Co. is presenting a trio of 997-era cars that display that development brilliantly. Instantly recognizable, a low-mileage 2008 Porsche 911 GT3 RS 3.6 is one of only 53 North American examples clad in RS Green. For 2010, Porsche increased displacement from its flat-6 engine to 3.8 liters. A gray-black-red example features carbon ceramic brakes for uncompromised track performance. The following year, Porsche reached the pinnacle of its analog 911 development. One lot, a 2011 GT3 RS 4.0, is one of 158 units set aside for North America. Not to be outdone, the more potent 2011 GT2 RS joins this collection with its rare, optional carbon-fiber fenders.

Breaking from the 911 montage, a 2015 Porsche 918 Spyder Weissach is a stunning, sophisticated, and scarce hypercar. Spiritual successor to the Carrera GT and pioneer for much of Porsche’s advanced hybrid technology, the 918 Spyder is one of the German automaker’s finest accomplishments. Of the 162 track-focused Weissach models produced, just seven were painted Liquid Metal Chrome Blue, making the 34-mile example on offer especially unique.

“These meticulously curated Motorsport Department models illustrate the remarkable evolution of Porsche performance over the past 25 years,” states David Brynan, a senior specialist at Gooding & Co. “We are thrilled to be presenting these examples of Porsche greatness from a dedicated collector who has painstakingly assembled an unrivaled collection.”