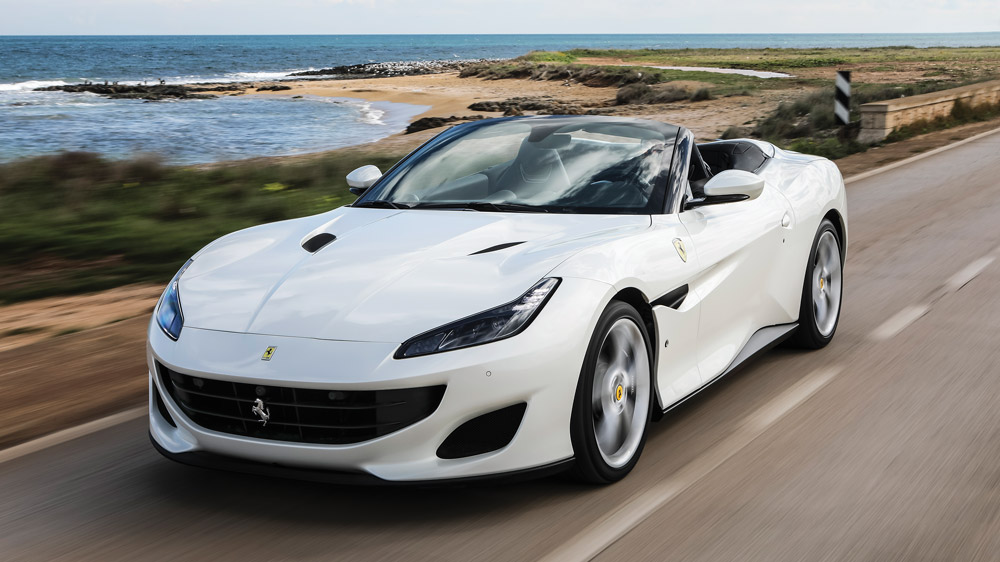 A steady snow pelted our group of drivers as we departed Masseria San Domenico, a hotel built on the grounds of a 15th-century watchtower in Puglia, Italy. The coastal roads were covered in white, and the windshield wipers of our test cars were hissing at a fever pitch. Certainly, this was an inauspicious morning on which to savor the topless delights of the new Portofino convertible. But even the foul weather couldn’t dampen our excitement about driving the latest Ferrari. Its achievements in motorsport legendary, Ferrari is equally renowned as a maker of road cars that have, since the middle of the last century, wowed anyone who registers a pulse. Ferrari’s GT cars are especially the stuff of dreams, as evidenced by the current value of a 250 GT SWB, a Lusso, or a 275 GTB. More recent standouts include the 365 GTB/4 “Daytona” and the Maranello 550 and 575 models, as well as the oft-ignored 365/400/412 GT series and 456 GT—all prime examples of Ferrari’s confident understatement, supremely refined aesthetics, and fundamental V-12 goodness. Among all the glorious GTs from Ferrari’s past, the Daytona, according to designers, was the so-called spiritual advisor in the development of the Portofino.

Named after the seaside village on the Italian Riviera—where it will no doubt be a perfect complement to the stylish scene—the Portofino (starting at $210,783) is the natural successor to the California T. And while superficially similar, they are in fact markedly different automobiles. What they have in common is their basic job description: Each is a convertible powered by a front-mid-mounted, twin-turbocharged V-8 engine that drives the rear wheels. From there, the engineering team took the proven concept of the California T—the best-selling Ferrari ever—and made it better from every angle.

The first angle is in the looks department. Though it has similar proportions to the California T, the Portofino has an all-new chassis and body panels. The designers particularly “sweated blood” with the retractable hard top, striving to achieve a true fastback design without the typical kink in the profile at the base of the backlight—a wrinkle shared by every other example, the Cali T included. With the Portofino, however, a drop-dead-gorgeous coupe turns into an uncompromised convertible design in a mere 14 seconds (while on the go, too) without any clunky, vestigial flying buttresses that punctuate the profiles of so many other open-top designs.

Aerodynamics play a huge role in the Portofino’s appearance, in part to improve the coefficient of drag (by 6 percent over the California T), add downforce, and provide additional cooling for the more powerful engine. But all this mad-scientist engineering still needs to end up looking like a Ferrari—and the Portofino does. Like with an Italian chiaroscuro woodcut, the dance of light and dark on the car results from the contrast of concave and convex surfaces (a contrast that also helps conduct airflow through headlights, front intakes, fender vents, and a diffuser apparatus at the rear to aid aerodynamic and cooling needs).

The Portofino’s profile recalls a feline predator, with muscular haunches and a narrow waist aft of a powerful chest. (Observe the interplay of rocker panels and wheel arches, and imagine a cheetah in motion captured by a sequence of stop-​motion photos by Eadweard Muybridge.) Our car was white, which would be heresy to lovers of red Ferraris, for whom the designers have introduced a special metallic hue called—what else?—Rosso Portofino. But the white looked especially right on this car, highlighted by black lower bodywork, which is also available in carbon fiber to add a little extra bling.

The big news, however, is what’s under the Portofino’s hood: a 591 hp, twin-turbo V-8 engine, up 40 hp from the California T. The extra juice comes from all-new internals (con rods, pistons, and such) and, importantly, new twin-scroll turbochargers and intake manifolds. Ferrari’s seven-speed F1 dual-clutch transmission puts all the power to the pavement and remains the auto-shift against which others should be judged. It’s a power-train combination that allows the Portofino to pounce from zero to 62 mph in less than 3.5 seconds and reach a top speed of 199 mph.

Truth be told, we negotiated most of our four-hour drive route in automatic mode, with the manettino—the steering-wheel-mounted selector switch—set to Comfort. We did indulge in Sport mode—and a fair bit of manual paddle-shift mischief—on some of the more engaging switchbacks before the weather got too bad. This small glitch in the celestial software—which delivered more snow than the Italian boot had seen in half a decade—also offered such delicacies as black ice. We soldiered through, however, and with the exception of a little tail wagging when set to Sport, the Portofino comported itself like a dream.

A lot of that dreaminess has to do with a suspension that soaks up road irregularities like a loofah sponge. Following routes in Southern Italy makes one wonder how it was possible to go anywhere before the advent of navigation technology (and the Ferrari’s is excellent). Still, my patient codriver and I unintentionally ended up on some outback adventures along decomposed granite roads lacing through ancient olive groves. At the time, I wished I had a front-end lift system, although I needn’t have worried—the front end never touched down.

Combining comfort and luxury with speed and performance is, of course, the real job of a grand-touring car. Ultimately, the best of them are easy to drive, challenging their pilots only when asked. And while a few owners may test their Portofinos on the track, most will want the car’s main mission to be absorbing road miles while carrying a companion—maybe some kids—and a little luggage. In regard to the latter, the retractable-hardtop apparatus does not drastically compromise cargo capacity, and the trunk can accommodate three roller-​type carry-ons (two if the top is down).

The Portofino’s elegant interior features 18-way adjustable electric seats built on a lightweight magnesium structure that allows a very thin seatback, adding greater legroom in the front and rear. (A tip of the hat to history is the Daytona seat option that recalls the famous design—with perforated inserts—seen on the 365 GTB/4.) Throughout the cabin, contemporary and tasteful expanses of leather are punctuated by silver aluminum trim. The 10.25-inch information screen in the center console is easy to reach and read. The large tach and adjacent TFT displays sit behind the multifunction steering wheel, which incorporates Ferrari’s novel thumb-operated turn-signal switches in addition to the omnipotent manettino drive-mode adjuster. An optional screen display sits above the glove box and provides performance data for passengers who have a need to know. Warm-weather driving is improved with a climate-control system that provides 20 percent greater air capacity. In top-down mode, noise and turbulence are reduced by a new wind deflector that lessens airflow over the body by 30 percent—not that we had a chance to lower the top for more than a moment.

Snaking along our winding route, we passed through small towns and country-side dotted with ancient trulli, stone houses and ruins capped with cone-shaped roofs that are the architectural signature of the region. In the town of Alberobello, hundreds of the historic monuments posed a striking contrast to our group of shiny new Ferraris, which took refuge in the main square. The juxtaposition drove home the fact that a Ferrari is all about contrast, in which historic models inform the spirit of the latest innovations. At once classic and cutting-edge, the Portofino delivers grand-touring performance and design worthy of its Ferrari pedigree.

Ferrari has a history of making some of the most beautiful convertibles in the GT kingdom. Among the series-production cars, the 275 GTB/4 NART Spyders—only 10 of which were built from 1967 through 1968—are at the top of the collector pyramid, with values upward of $25 million. Close behind is the 250 GT SWB Spyder California, about 51 of which were made from 1960 through 1963; a good one will tip the scale north of $15 million. Worth about half that is the 250 GT California Spyder LWB (Series II)—not exactly chopped liver. Both of the latter models are long, sleek, and utterly chic.

Through the mid-1960s, models like the 275 GTS and 330 GTS took an almost understated stance; today, they lurch into the $2 million range. The kingpin of the 1970s was the 365 GTS/4, known as the Daytona Spyder, which remains a true icon of its age. While almost 1,300 berlinettas (coupes) were made, 365 GTS/4 convertibles are scarce, with only 121 factory-built examples produced. The cars became so popular that shops like Straman used reciprocating saws to create replicas, which are now worth well less than half the value of a $2 million original.

With the advent of the current decade, fabric convertibles went the way of the dodo and folding metal tops became the norm. But whatever the style of the season, it’s a sure bet that a convertible Ferrari will never go out of fashion.