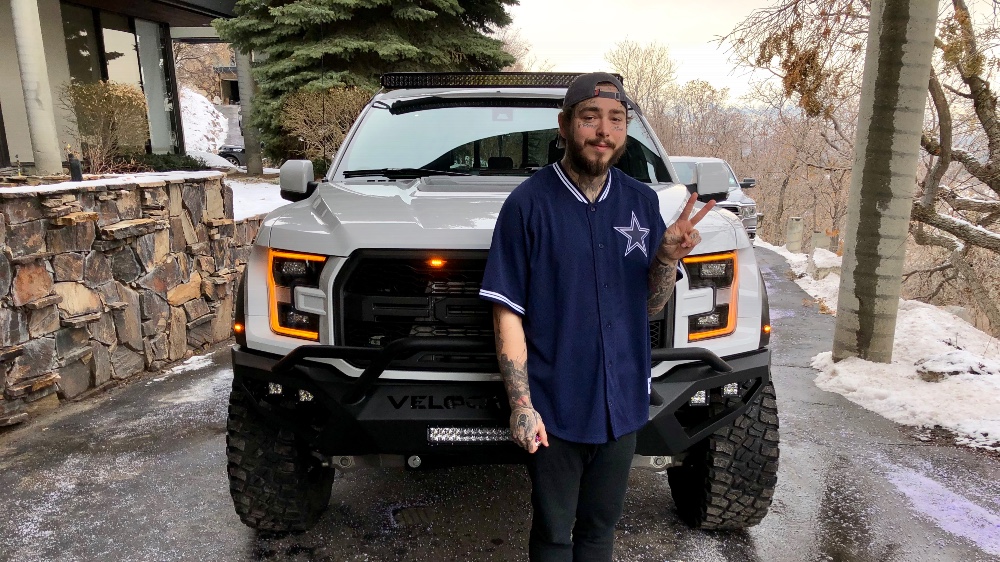 Why settle for two axles when three is far more eye-catching? A slew of new 6x6s are hitting the streets and driveways everywhere, but a few of the more notable ones have gone to Post Malone and EDM DJ Marshmello. Forget hella cool; these beasts are hexa cool.

Back in October, pop rapper Post Malone shared a picture of himself and John Hennessey, of Hennessey Performance fame, lending speculation that a collaboration was afoot. Sure enough, Malone received delivery of a stunning Hennessey VelociRaptor 6×6 just before the holidays.

The VelociRaptor begins life as a 2017-2018 Ford Raptor SuperCrew before Hennessey stretches the chassis to add 6×6 locking rear axles, upgrades the already class-leading Fox suspension, bolts on some beefier 20-inch off-road tires and custom bumpers, and affixes a roll bar and some LED lights. Under the hood, the stock Ford Performance 3.5-liter V-6 EcoBoost twin-turbo gets tuned to up the horsepower to 600 and 622 ft lbs of yank. That’s enough to propel the monster from zero to 60 in 4.2 seconds. Looks like Malone also got a special steel post mounted in the bed in the shape of a strand of barbed wire—an homage to his barbed-wire face tattoo. That post is actually a .50 caliber gun mount, which is simultaneously awesome and terrifying. The cost of looking like the biggest badass on the road? An eye-watering $349,000. Watch Malone accept delivery from Hennessey himself in the below video.

Meanwhile, the Diesel Brothers have built a seriously menacing Ford 6×6 for EDM superstar Marshmello. This 26-foot whopper was built in Utah and features a full air suspension that’s controlled by an iPad and a slew of custom work on the front fascia, roll bar, and bed. Marshmello’s road-legal monster truck is now with aftermarket shop RDB LA for finishing touches, including a starlight roof and a backup camera, because it currently doesn’t have one. (Though with something this tank-like, you can probably just back up over—or through—just about any obstacle or building.)

RDB LA is also going to add a wrap, though hasn’t mentioned if that’ll have any actual marshmallows included in the design. Upon delivery, Dave Sparks of Diesel Brothers threw some subtle shade at Hennessey by including a “#velociraptorKILLER” in his Instagram post, though it’s unclear what’s under that massive hood. Still, a drag race between Malone and Marshmello would be highly welcome to see whose six-by reigns supreme. Catch the behemoth in motion in this video from RDB LA.

Should you happen to own a non-Ford-based 6×6 and have a spare $289,900 burning a hole in your pocket, this one-of-a-kind Jeep Wrangler 6×6 offering from Exotic Custom Motorsports is for sale on … Craigslist. (Yes, seriously.) Built as an exhibition for SEMA, the JK Six, as they’ve dubbed it, is powered by a 707-hp Hellcat V-8 crate engine, giving you all the bragging rights. Hours of custom fabrication went into what you see here, including the panel work, fenders, bumpers, and the carbon-fiber grille. The JK Six gets a five-inch lift so those 35-inch tires will fit comfortably, and that third axle was also created from scratch in Exotic Custom’s California shop.

All of these elongated trucks will help you stand out, but our personal favorite third-axled beaut is still the handsome Land Rover Defender XS Flying Huntsman, built by Kahn Automobiles. Just look at this stunner.