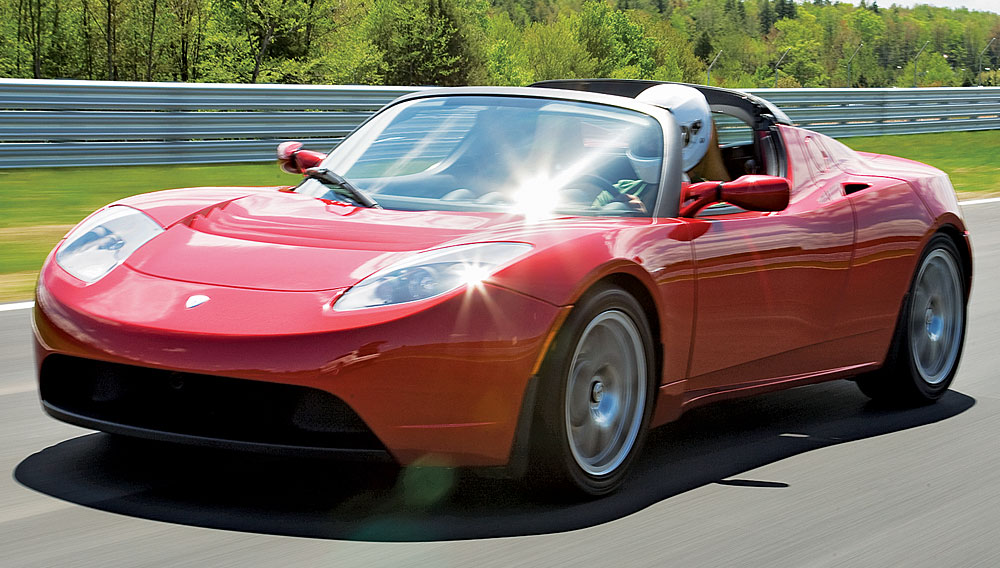 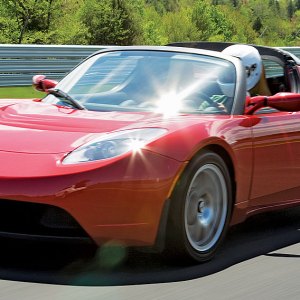 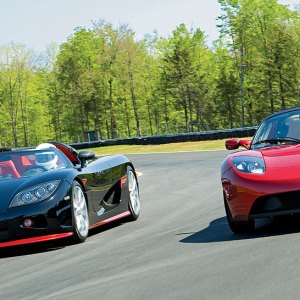 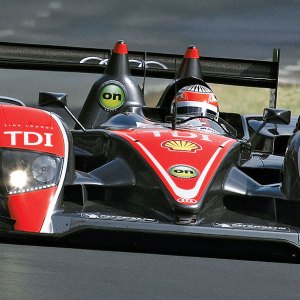 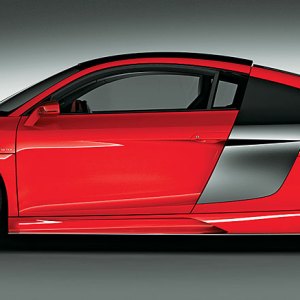 It did not take long for enthusiasts of high-performance cars to redefine the term “going green” as a pejorative. Among drivers who savor speed and raw power, the very thought of another fuel-sipping hybrid seems to trigger yawns and sighs.

However, there are a handful of manufacturers currently striving to prove these skeptics wrong. Performance cars, they argue, do not have to sacrifice power for the sake of the environment. Recently, the Monticello Motor Club invited three such companies—Audi, Koenigsegg, and Tesla Motors—to exhibit their green performance cars at its track in New York’s Catskill Mountains. On display for Motor Club members and Robb Report that day were the diesel Audi R10 TDI, the biofuel Koenigsegg CCXR, and the Tesla Roadster—three high-performance cars featuring technologies designed to improve engine efficiencies and lower emissions. “The management here at Monticello Motor Club definitely supports the idea of so-called green technologies,” says Bill McMichael, a co-owner of the organization. “And we are fascinated by companies that are willing to invest time and money to produce viable alternatives to a Porsche or Ferrari.”

According to McMichael, many club members enjoy being the first to own a new model, particularly one that is high-profile and turns heads. Yet, he adds jovially, there is probably something else motivating these enthusiasts. “If it has wheels and puts down impressive track times, then we are interested in that, too.”

The Audi R10 TDI epitomizes the ultra-desirable, high-profile car to which McMichael refers. The diesel-powered R10 burst onto the racing circuit three years ago, surprising everyone by winning its first Le Mans series race at the 12 Hours of Sebring in 2006. “When we fronted up in Sebring with our brand-new car, no team had ever purpose-built a racing diesel engine,” says Audi factory driver Allan McNish. “No one—not even I, at first—felt that we had the technology or the capability to take on gas-powered cars and win.”

But win they did—again and again. The R10 dominated nearly every race it ran for three years straight, and, with more than 650 hp and 811 ft lbs of torque, it was the very definition of a performance monster. Yet this monster possessed certain refinements. For example, its 5.5-liter twin-turbo V-12 diesel engine was whisper quiet; its oval exhaust tips never snarled or barked.

To no one’s surprise in Europe, Audi is now continuing its diesel development with the all-new R15 TDI racecar, which recently placed first at the 12 Hours of Sebring and third at the 24 Hours of Le Mans. “It seems that the concept of a good diesel is new for the American market,” notes McNish, who lives in Monaco, “but on this side of the Atlantic it is a very different story. In France, for example, 75 percent of the cars sold are diesel. These are not the smelly, dirty, underperforming diesels that we used to know.” In fact, the German manufacturer is so sure of its new clean-diesel technology (TDI, or turbo direct injection) that it is preparing to offer a variety of TDI production models in the coming years.

The Q7 TDI, Audi’s first diesel-powered production model for the U.S. market, arrived in North American showrooms in April. Although a 3-liter turbocharged V-6 engine that only produces 225 hp looks a bit lackluster on paper, the diesel-powered motor churns up an impressive 406 ft lbs of torque—more than 80 ft lbs over the top-range V-8 gas-powered Q7. Better yet, the car gets 25 mpg on the highway, which means that it can travel more than 600 miles on a full tank. And much like the R10, the seven-passenger Q7 TDI is surprisingly quiet and responds quickly to every touch of the throttle.

McNish sums up this diesel’s appeal more succinctly: “Torque,” he says, “is the new horsepower.”

Christian von Koenigsegg, founder of the Swedish supercar company that bears his name, might disagree with McNish’s assertion. He has created a greener car not by reducing horsepower—the Koenigsegg CCXR packs a brutish 1,018 hp engine—but by designing a fuel system that uses ethanol, a biofuel alternative that some argue burns more cleanly than traditional gasoline. “In Sweden, ethanol is very popular,” Koenigsegg says. “You can find it at every gas station because Sweden is a very environmentally conscious country.” In the United States, however, ethanol is not quite as accessible, which is why Koenigsegg developed the CCXR to run on gasoline, E85 (a blend that is 85 percent ethanol and 15 percent gasoline), pure ethanol, and every mix ratio in between.

The car has a sensory system in its fuel tank that measures levels of ethanol and gasoline and then recalibrates the engine to perform at its optimal level. This system actually changes the car’s power output depending on the type or mix of fuel. “An interesting fact about ethanol is that it actually burns cooler than petroleum-based fuels,” Koenigsegg says. “It puts less stress on the engine with the same amount of cylinder pressure, but you run out of fuel sooner. You can drive for about 15 minutes full throttle before the tank runs out on ethanol.”

To complement the intricate, highly original fuel system, Koenigsegg manufactures the CCXR to the highest standards, with workers building each car by hand. This model starts at $1.3 million, but can exceed $2 million with custom coachwork. “If you look at the performance figures and the total package,” Koenigsegg says, “there are not many supercars in the world that can come close to the things that the CCXR can do.” The automobile’s only real competition is the Bugatti Veyron Grand Sport, but then again there is really no comparing one of the most conspicuous gas-guzzlers on the planet with a green supercar like the CCXR.

Only 10 CCXRs will arrive in the United States this year, and this small number seems ambitious when one considers that the company has delivered only 77 cars since its founding in 2002. Koenigsegg, however, is putting a positive spin on the current downturn; the Swedish supercar manufacturer recently signed a letter of intent to purchase Saab—another Swedish car company that dabbles in ethanol-based fuel systems—from General Motors. Industry watchers predict the deal will be finalized by the end of 2009. “It is very rare that a small company like ours would have the means to buy a larger company like Saab,” Koenigsegg says. “We will be able to do a lot of good things for Saab, and being Swedish adds a more personal touch to the brand, too.”

In September, California’s Tesla Motors delivered its 700th Roadster, a milestone in the history of this manufacturer of electric automobiles. “Five hundred cars is a pretty significant number for us,” says Tesla Motors cofounder and CEO Elon Musk. “And we just opened our new store in London, so it seems that everything is a big deal these days.”

In the automobile industry, the Tesla Roadster is a big deal. This two-seater completely defies convention by forsaking fossil fuels. Instead, it derives power from 6,831 lithium-ion battery cells and can travel an EPA-estimated 244 miles on a single charge. Although it produces only 248 hp, its small packaging and jolting torque—which is all available at zero rpm—make it one of the most competitive sports cars on the market today, if not the most intriguing. The Roadster, Tesla proudly declares, can go from zero to 60 mph in just 3.7 seconds.

But Tesla is not putting all of its hopes and dreams on the Roadster. “Tesla is really targeted toward reaching the mass market as soon as possible, which I know is not really the Robb Report way of doing things,” jokes Musk. “But the reason I put so much time into starting Tesla was to create a catalyst for the electric-car movement. I really want to encourage the industry to move in that direction.”

Right now the company only builds about 20 to 30 cars per week, but Musk says that will change within the next few years with the help of a recently secured federal loan of $465 million. He says most of this money will fund the construction of a manufacturing facility for the planned Tesla Model S sedan, which will be priced at $57,400 when it comes to market in 2011. The company will plow $100 million of the loan into building a power-train manufacturing facility. Ultimately, Tesla will be able to provide third-party automakers with its power trains. “If you’re a performance buyer that cares about the environment, then we offer a unique value proposition,” Musk says. “The Roadster, even though it’s a sports car, has half the CO2 output and energy usage of a Prius. We built it to show the world that you can own an exciting car while driving it with a clean conscience.”

Companies such as Audi, Koenigsegg, and Tesla have officially put the rest of the automotive industry on notice. More and more luxury buyers are realizing that they do not need to compromise their performance desires for the sake of an environmental duty. “People are never going to stop driving sporty, powerful cars,” says McNish, “but I think that what classifies as a sporty, powerful car and the engine that powers it is a constant evolution.”

TDI racecar, Audi installed its track-proven clean-diesel technology to the engine bay of its flagship sports car. Equipped with a 6-liter turbocharged diesel V-12 engine, the R8 V12 TDI concept car develops 500 hp and an astounding 738 ft lbs of torque. Unfortunately for diesel fans, this green machine has yet to make it past the development stages of production, and the German automaker has not given official word on when or if the concept car will ultimately find its way to showrooms. Audi, www.audi.com

Designed and developed by Fisker Automotive—a newfangled partnership between Fisker Coachbuild, which was cofounded by Henrik Fisker (of BMW and Aston Martin fame), and California-based propulsions-systems pioneer Quantum Technologies—the Fisker Karma ($87,900) will be the world’s first luxury plug-in hybrid when deliveries begin in 2010. With 403 hp, the ground-hugging four-door will be able to reach 60 mph in six seconds and reach a top speed of 125 mph. The Karma will also boast a 50-mile range on stored electric energy only, and a gas-powered motor will serve as a generator for an additional 250 miles after the batteries run dry. Fisker Automotive, 714.888.4255, www.fiskerautomotive.com

Ask a native of Monticello, N.Y., for directions to the track, and you will likely find yourself headed to a dirt oval with stables and hay. And if you specify that you are looking for the Monticello Motor Club, chances are the local will have never heard of it. This is because the price of admission at the exclusive organization is $125,000, which provides access to the track for up to 200 days every year for the next 48 years. What’s more, the club’s facilities in the beautiful Catskill Mountains are still being built. “We probably have a good 10 years of development on this property,” says co-owner and partner Bill McMichael. “We have almost 700 acres here, and ultimately we want to make this place a destination.”

The club plans to build an oval track, a drag strip, an off-road track, an automotive museum, and retail shops over the next few years. The club recruits members primarily from the Northeast, but also offers a national membership ($50,000 for 15 days per year for 48 years) for those who do not live within driving distance of Monticello. For now, members keep coming back for the 4.1-mile racetrack. The club has a fleet of Cadillac CTS-V sport sedans for membership programs such as the High Performance Driving School, and a race school for seasoned professionals who would like to be Sports Car Club of America–certified. “We also just started a karting program for the younger kids,” McMichael says. “It’s really becoming a cool place for a family vacation.” Monticello Motor Club, 877.578.7223, www.monticellomotorclub.com