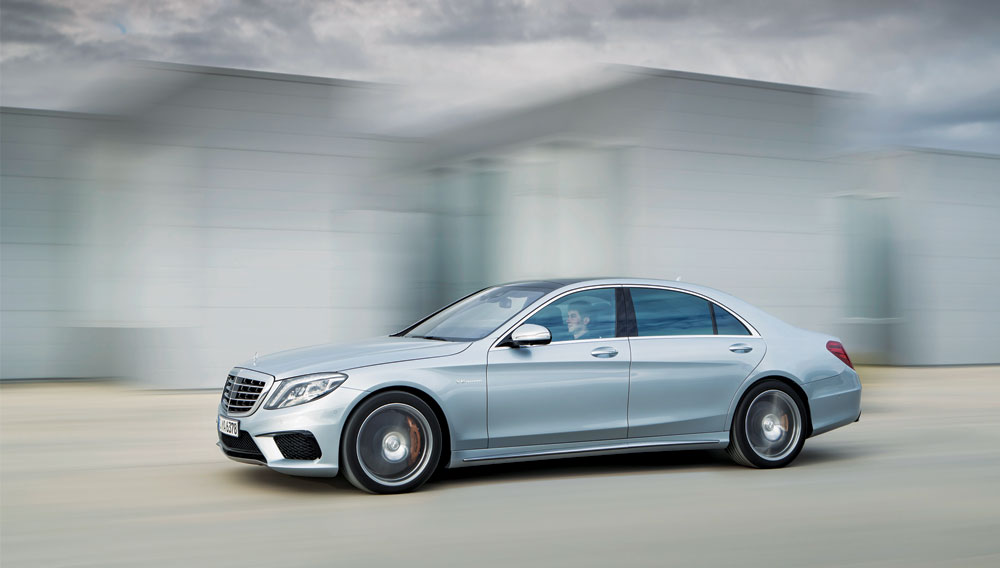 With its more potent engine, the Mercedes-Benz S63 AMG sedan outscores the S550.

After introducing the new-generation S-Class last year with the line’s most modest member, the $94,400 S550 sedan, Mercedes-Benz began presenting quicker and costlier variants, the first of which was the S63 AMG 4Matic sedan. Priced from about $141,500, the S63 AMG is distinguished from the S550 primarily by its more powerful engine. It swaps the S550’s silky and subtle 449 hp 4.6-liter biturbo V-8 for AMG’s 5.5-liter biturbo V-8, which produces 577 hp and 664 ft lbs of torque.

The S63 AMG also adds a raft of high-performance accoutrements: upgraded brakes, sport-tuned suspension, 20-inch wheels, and more aggressive-looking lower bodywork that includes a front apron, flared side sills, and a rear diffuser. The 7-speed transmission, which features three driving modes, delivers power through a redesigned 4Matic all-wheel-drive system, sending torque to the front and rear axles at a 33/67 split. The S63 AMG’s performance-tuned exhaust system includes a quartet of chrome tailpipes that emit a sound more refined than raucous.

In the cabin, the S63 AMG’s seats are upholstered in perforated napa leather embossed with the AMG insignia. The front seats are heated and ventilated, and they are equipped with a massage function. These features plus the navigation system and Burmester audio system are accessed and controlled with relative ease by turning a knob and using a touch pad. Mercedes-Benz calls this the COMAND system, for Cockpit Management and Data.

The company offers a number of rear-cabin options directed at buyers who intend to use the S63 AMG as a limousine. These include an Executive seat (behind the front passenger seat), which, in addition to being heated, ventilated, and capable of providing a massage, reclines to 43 degrees and is designed with a calf rest and footrest. The seat also is equipped with controls for moving the front passenger seat forward 3 inches and titling the back of that seat forward (when unoccupied), adding more space to a rear cabin that already includes 43 inches of legroom. Other options for rear-seat passengers include a refrigerator box that will hold a couple bottles of wine, and cup holders with heating and cooling functions.

While the S63 AMG can insulate passengers from the bustle and noise of the world outside effectively enough to serve as a limousine, it is still a driver’s car. It reaches 60 mph from a standstill in just 3.9 seconds, but such acceleration has become a prerequisite for cars in this segment. What is rare and more impressive is the grip this 4,806-pound, 17-foot-long machine demonstrates as its speeds through turns. The S63 AMG is compliant yet completely in control, allowing just enough tail-wagging to engage the driver. The car keeps its poise thanks to a semi-active suspension and the Electronic Stability Program, which detects wheel spin, oversteer, and understeer. In response, the program automatically applies the appropriate rear-wheel brake and reduces the engine’s power enough for the driver to get the car under control and maybe keep the contents of the vessels in those rear-seat cup holders from spilling.