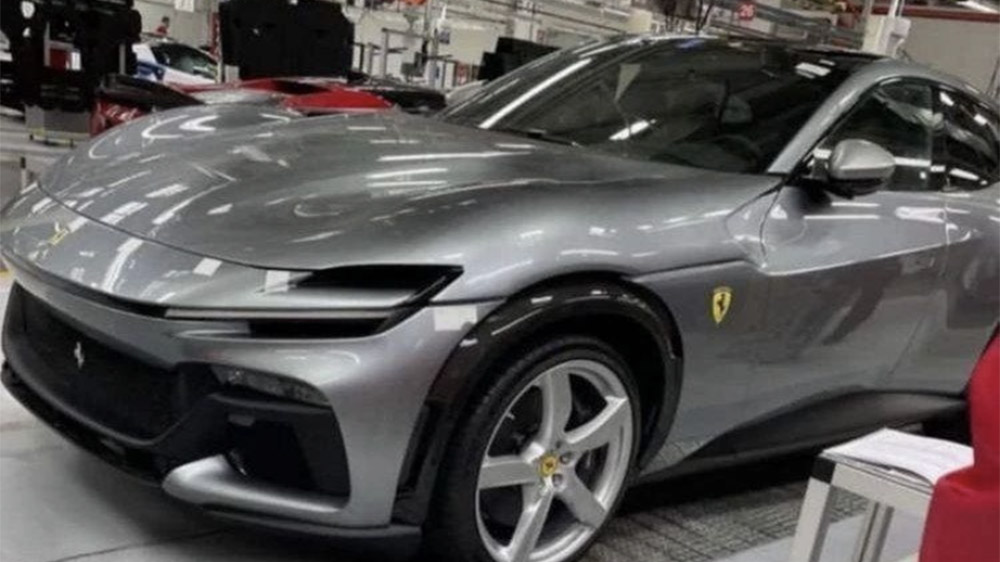 It’s taken years, but we may finally have an idea what the Ferrari Purosangue will look like.

Two leaked images showing what is believed to be a pre-production example of the Prancing Horse’s first SUV started circulating online on Monday, according to Car and Driver. The two images—if they do in fact show the Purosangue—represent the first glimpses of the anticipated vehicle unobscured by camouflage.

It’s unclear where the photos, which were shared on Instagram by CocheSpias, originate from, but they appear to have been taken on the floor of the Italian marque’s production facility in Maranello. The first image, which offers a three-quarters front view of the vehicle, shows off its long nose, curvaceous hood and split headlights similar to those found on the SF90 Stradale, as Car Scoops points out. The picture cuts off just after the B pillar, but the vehicle clearly has four doors, a sloping roof line and has also been outfitted with black side skirts and cladding around the wheel arches. The second photo, meanwhile, is of the SUV’s rear and shows off a full-width light bar connecting quad taillights like those on the 296 GTB, along with a large diffuser and quad tailpipes.

Ferrari did not immediately respond to a request for comment from Robb Report regarding the photos.

We imagine we won’t have to wait too long to find out how legitimate the images are, though. Earlier this month, while celebrating its latest record-setting sales report, the automaker said that it expects to begin production of its first SUV before the end of the year, with deliveries slated to begin in early 2023. Nothing has been announced yet, but we expect there will be a glitzy debut event before then.

As for what will sit under the hood of the Purosangue, Ferrari has kept that information close to the vest since announcing the SUV 2018. There’s been some speculation that drivers will have their choice of a naturally aspirated V-12 and a V-6 hybrid power unit, but neither has been confirmed. The good news is, that question will be answered is short order,  as a Ferrari SUV is almost a reality.