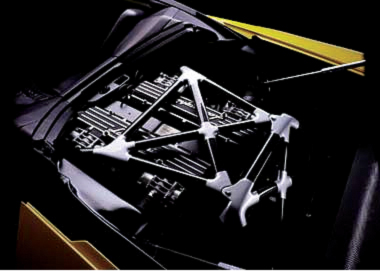 The airliner touches down in Bologna, a group of Italian teenagers on board cheers and applauds and then breaks into a beautiful operatic aria. This is the introduction to Italy for a visitor arriving to test-drive Lamborghini’s new Murciélago Roadster, the 580 hp, 198.8 mph topless version of the carmaker’s flagship coupe. However, such a reaction to an accomplishment as commonplace as landing a plane is not so surprising, for it is indicative of the spirit of music and art that seems to reside within so many Italians. Theirs is a culture that revels in life, and if this sensibility were absent, it is doubtful that Lamborghini, Ferrari, or Maserati could have been founded here.

Thus the Murciélago is a product of its country, just as the Corvette is uniquely American. It is an unmistakably Italian statement of fórma e funzione, a celebration of beauty and power. And when you stomp on the accelerator and push the Lamborghini V-12 to 6,000 rpm, you, too, celebrate with a shout that reverberates through the Sant’Agata countryside like a thunderclap and declares that life is indeed damn good.

The new owner of Lamborghini, Germany’s Audi, clearly is striving to preserve the same spark and spirit that company founder Ferruccio Lamborghini infused into his works of art, and with the Murciélago Roadster, which will be available by the end of this year, Audi has succeeded. At the heart of the Murciélago is the perfectly balanced, soul-pounding 6.2-liter V-12, which can propel the Roadster from zero to 62 mph in 3.7 seconds. The engine delivers the same awe-inspiring operatic assault as those that powered Lamborghinis of the past. Reminiscent of the start of a grand prix—in surround sound—its shriek tingles the spine and sets the heart thumping.

With the engine positioned directly behind your head, driving the Roadster is like sitting amid the London Philharmonic as it performs The Planets, with the entire brass section erupting behind you, and the rest of the orchestra reaching a crescendo in front. Your body shivers from head to toe with the physics of perfect vibration and sound.

This is the experience that Lamborghini’s head of design, Luc Donckerwolke, tried to capture with the Roadster. Although it is difficult, perhaps impossible, to match the accomplishments of his predecessor, Bertone’s Marcello Gandini, creator of the Miura and Countach, nobody is designing better cars today than Donckerwolke.

Visually, the Murciélago Roadster is a wild brute—nothing boring, pure muscle. With what he calls an “orchestration of thermodynamicism,” Donckerwolke has removed the hardtop and added an exciting mix of angles, creating a form more exciting, more flamboyant than the original coupe. Like the big Countachs of the 1980s, the Roadster can support a larger ego than the original Murciélago can.

But comparisons to the cars of Ferruccio, Bizzarrini, Dallara, Stanzini, and Wallace are somewhat irrelevant, because the $320,000 Murciélago Roadster is a refined, modern supercar, unlike anything Lamborghini—or anybody else, for that matter—produced in the 1960s and ’70s. A new generation of engineers, led by the adroit direttóre tècnico Massimo Ceccarani, has ushered Lamborghini into this millennium. Among the factory staff of nearly 800 employees, 150 work in Lamborghini’s R&D department. Apparently such an allocation of resources is required to achieve the technology underpinning the Murciélago Roadster, which includes some of the automotive world’s most advanced, high-performance concepts.

Central to the Murciélago’s performance is Lamborghini’s variable geometry intake and exhaust systems, which, when paired with variable valve timing, ensure that no dead spots exist throughout the entire bandwidth of the mighty, naturally aspirated V-12.

The result is a superabundance of smooth power on tap, at any rpm up to redline.

Add the full-time, four-wheel-drive viscous transmission, antidive/antisquat features, and a new braking system—all controlled by a plethora of onboard computers and unobtrusive feedback systems—and you have an unsurpassed mating of power to asphalt. It is irrational to think that you will ever need anything more to pull you effortlessly through the esses, without so much as a chirp from any of the massive Pirelli Rossos.

The only imperfect sound you will hear is from the sports sedan in front of you, whose driver desperately struggles to keep his car from flying off the road as you bear down on him. It is a pointless effort, actually; he does not have a chance. At the first sign of passable road, the Murciélago lunges forward at Can-Am speed, leaving the sedan behind so quickly you wonder why the driver even bothered trying to hold his lead.

Other high-technology accoutrements include an automatic, electronically controlled roll bar, which, when needed, extends from its housing behind the seats in only a few milliseconds. It is an innovation available only because of Audi’s involvement.

This is the kind of machine former Lamborghini test-driver and development engin`eer Bob Wallace would like because of its brute power and uncompromising technology. But left to his own devices, Wallace would have the Murcie stripped down to its raw essentials in no time—unearth another 100 hp, pare 1,000 pounds of girth—and would then head back up into the hills above Sant’Agata for another frightening road test.

With every Lamborghini, extra pounds could be shed and additional horsepower unleashed. They never have been designed to be racing cars, but rather to be as close to racecars as possible while still being civilized; Ferruccio’s goal was to get from a business meeting to his vineyard as quickly and comfortably as possible.

Longtime owners know that, historically, no true Lamborghini is without flaws such as flopping visors or leaking oil coolers. In keeping with this tradition, the Roadster is endowed with a few odd attributes, most notably the chassis-stiffening X brace and the soft-top roof, which, the company suggests, should be used only when the weather turns inclement.

The soft top is not a one-button Ford Starliner affair. Just pray that you never need it, because if you are assembling it for the first time, the car probably will fill with rain before the instructions sink in. And once in place, the top looks like an ill-fitting toupee.

An even greater detractor, the engine bay X brace, which retains the chassis rigidity that was lost by lopping off the coupe top, looks ungainly regardless of how you rationalize it. The motor is everything in this car—just as it is with the 360 Modena, which Ferrari was wise enough to equip with a transparent hood for the engine—and covering it is equivalent to welding a steel frame over the Mona Lisa. There must be a more elegant solution.

The E-gear robotic transmission (a $9,000 option) has some redeeming qualities. Most notably, it is fun. Some cleverly programmed algorithms ensure realistic gear changes. But E-gear is not without flaws. When you dive hard into a turn, the shift paddles can end up under the opposite hands, with potentially confusing results. We also experienced an occasional lurching-off-idle glitch, reminiscent of your kid sister’s first clutch engagement.

Bugs aside, the Roadster supports the notion that Audi is preserving the spirit and essence of the classic Lamborghinis. It combines the sophisticated comfort and style of the 1960s 400GT cars with the racecar wildness of the Miura and Countach. Whether the new management can sustain the core experience and excitement that define the great Lamborghinis of the past is another matter. In response to marketplace realities, future Lamborghinis may become more like the Audi-derived Gallardo. But with its northern cousin’s deep pockets and quality control, Lamborghini ultimately could rival Ferrari, which is what Ferruccio originally set out to do.