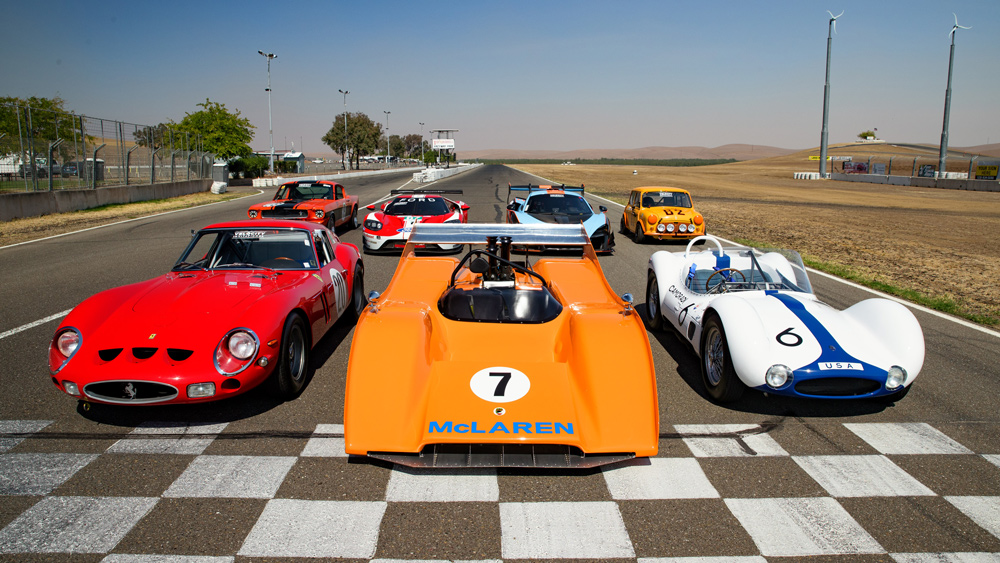 A few years back, a book signing event sent me to Sonoma Raceway, in Sonoma, Calif., for a weekend of vintage racing in June, which unfortunately overlapped with a certain wedding anniversary. “Come to the track,” I begged my wife. “It’ll be fun.” Good sport that she is (and possibly swayed by the promise of a Michelin-starred dinner in nearby Healdsburg), my better half came along despite a friend’s warnings of inedible track grub and motorsports ennui. It didn’t take long, however, to realize this wasn’t a usual race confluence after having to peel her away from the raw oyster bar and champagne-tasting table. Needless to say, we had a memorable time—against all testosterone-fueled odds.

While the event we attended is now defunct, the inaugural Velocity Invitational is coming to WeatherTech Raceway Laguna Seca, in Salinas, Calif., from November 11 through 14. The latter is about as close as you’ll get to a spiritual successor for that late, great, foodie-focused weekend. Velocity Invitational’s founder, Jeff O’Neill, is no stranger to fine food and fast cars; the vintage racer and vintner has long considered the two spheres fully compatible. He launched the aforementioned 2019 Sonoma Speed Festival, which strove to appease both sides of the seemingly paradoxical fine cuisine/racing equation. The gathering paired local culinary offerings with a broad array of storied machines—from 1930s Grand Prix racers to Lewis Hamilton’s Mercedes-AMG Petronas Formula 1 car, which broke the track’s lap record that weekend.

Recently, the team behind Velocity Invitational invited Robb Report to experience a few notable machines for a preview of this year’s first-ever running. First up: the holy grail of all race cars, the Ferrari 250 GTO. With a history of dominance on the racetrack and only 39 examples produced, the curvaceous two-seater has earned mythical status in the collector-car world, helping explain why it has traded hands for upwards of $70 million.

GTOs are rarely driven in anger, though that didn’t stop O’Neill from piloting the Ferrari like a V-12-powered bat out of hell while we rode along in the passenger seat. This particular GTO, owned by O’Neill’s friend Tom Price, presents the familiar hallmarks of a race car—snarling power, a minimalist construction bordering on flimsy, and a slinky aluminum body befitting an anime cartoon. Hunkered behind the wheel, O’Neill tosses the GTO into a corner, gooses the throttle, and drifts the front-engined GTO through a corner, its fat sidewalls squishing under load as the 3.0-liter V-12 belts out operatic, multi-harmonic strains. After several laps in the near-priceless Italian model, it becomes easier to dissociate the car’s staggering value from its singular purpose of going fast (and looking impossibly pretty while doing so). Perhaps that’s why this race car is so much more than a rolling hunk of metal. Yet at the end of the day, it’s also simply that, albeit one that’s exponentially more special than most automotive rarities.

The front-engined Ferrari 250 GTO is powered by a 3.0-liter V-12.  Photo by Larry Chen, courtesy of Velocity Invitational.

For more hands-on inspiration we were tossed the keys to a smattering of eclectic racers which will be participating at Velocity Invitational. The abject cuteness of the Austin Mini Cooper S might steal the show, but its diminutive 1,275 cc power plant and 1,300 pounds of bantamweight fury make it a hilariously engaging vehicle to drive at speed. “Try not to lift,” advises Don Racine, a guru when it comes to racing the Mini, noting that the Lilliputian front-drive car easily spins if the throttle doesn’t stay pegged through corners. With its huge steering wheel and surprisingly spacious cabin, the Mini feels strangely vintage while simultaneously ahead of its time. It also gives the big, expensive models a run for their money with its deft maneuverability and playful agility.

Next switching to an Alfa Romeo GTA Junior, O’Neill’s personal car, reveals a nearly opposite experience. The balanced front-engine, rear-drive configuration lends it a more manageable persona. With a sonorous 1,750 cc engine propelling slightly more mass, it’s also less hair-raising than the frantic Mini; this is a car that builds confidence with its approachable nature.

While the GTA comes across as sensually pleasing, the ultimate gut punch arrives in the form of the 1969 Ford Mustang Boss 302 Trans-Am car once campaigned by racing legends Parnelli Jones and George Follmer. The Blue Oval sounds like a beast, even at idle, despite packing “a bunch of mufflers,” according to the car’s mechanic. Although the first few thousand rpm prove surprisingly tame (despite an unholy racket emanating from the race-prepped V-8), the last few thousand rpm are riotously thrusty, leading to an 8,000 rpm crescendo of power. Proving that 1960s Trans-Am drivers like Jones and Follmer were made of meaner stuff, it takes Herculean core and arm strength to wrangle the Mustang into corners; a heave and a ho, and the blunt tip of this weapon eventually points itself towards an apex, where it rumbles ahead with broad-shouldered insouciance.

Also part of the field is a McLaren Speedtail, a hybrid hypercar whose central seating position pays homage to the legendary McLaren F1. Whereas the classic race cars broadcast their intentions through exuberant sheet metal and rowdy dynamics, the 1,035 hp Speedtail is stealth in its ability to reach 250 mph. Instead of relying on conventional mirrors, two screens on either side of the driver seat display rearward views– which is largely irrelevant today because the Speedtail passes the vintage machines like they’re standing still. Yet there’s a surprising gracefulness to this McLaren, accentuated by its lengthy, wind-cheating bodywork that tapers into a fine point at the tail.

While attendees are unlikely to achieve these levels of firsthand motoring bliss from the bleachers at the upcoming Velocity Invitational, the spectacle of 10 categories ranging from 1910-era racers to contemporary Formula 1 cars is enough to keep even the most jaded gearheads absolutely heady.