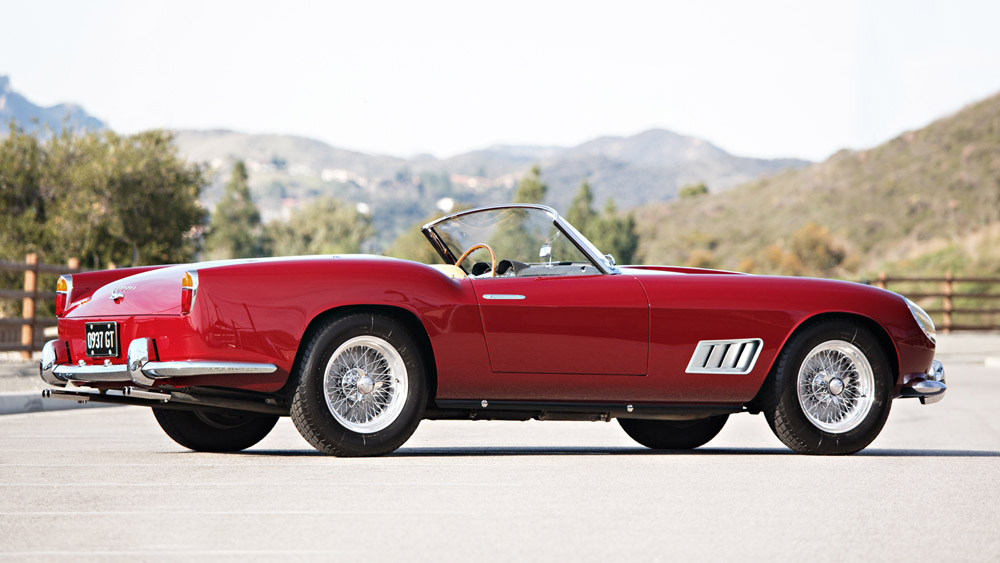 The market for collector cars, like any commodity, ebbs and flows on both macro and micro levels. Last August, for example, Gooding & Company sold 17 automobiles for seven figures during its Pebble Beach auction—one almost reaching the eight-figure mark. However, several months before, none of the seven-figure cars that the company sold during its Amelia Island auction (there were six) eclipsed $2 million. By contrast, 10 examples on Gooding & Company’s 2020 Amelia Island docket are expected to sell for at least seven figures on March 6, one of which could rank among the year’s most expensive collector car acquisitions.

That vehicle, a 1958 Ferrari 250 GT LWB California Spider, is arguably one of the most recognizable classic sports cars ever built. The Italian automaker only made 50 long-wheelbase examples, and this particular one—a desirable, matching-numbers, covered-headlight variant—is even more sought after for its rare hardtop. “The best thing about a California Spider is that it’s an open car,” acknowledges David Gooding, “but they look super cool with a hardtop. And the hardtop definitely makes this concours car stand out.”

The vehicle has, of course, stood out all its life, as evidenced by the photographic documentation that accompanies it in this sale. According to Gooding, those photos are an uncommon feature that provide greater value, even if the enhanced worth is mostly sentimental. “Some of these cars are so rare and so special, but when you see them on a concours field with other rare exotic cars they can lose their significance,” notes Gooding. When you see a photo of a car like this parked in 1960 with pedestrian cars all around it, you go, ‘God, what a machine it was back then!’ It’s an incredible machine and every bit as beautiful now, but in the context of what it was back then, it was otherworldly.” The auction house conservatively estimates the car to sell for as much as $11 million.

Only 50 long-wheelbase examples of the model were made.  Photo: Courtesy of Gooding & Company.

But the California Spider isn’t the only significant four-wheeler—with a thoroughly documented history—that Gooding will offer. Twenty-four lots after the headlining Ferrari rolls across the block, bidding will open on what many enthusiasts consider the most collectible Porsche 934 in existence.

Not only is this particular 1976 Porsche the first 934 built—of only 31 examples produced in total—it also raced in the 24 Hours of Le Mans. Despite that provenance, the car’s most compelling feature, according to Gooding, is its original condition—a selling point that could command an estimated $1.6 million.

“Many of the 934s had really hard lives as racing cars,” says Gooding. “They were used and used and used and modified with different engines and suspension setups. This car never suffered from that.”

The Porsche 934 on offer, one of only 31 examples produced, also raced at Le Mans.  Photo: Courtesy of Gooding & Company.

Collectors who value originality above all else will also be seduced by a 1969 Lamborghini Miura P400 S, one that warrants “preservation-class” status given that it’s never been restored and has been driven fewer than 18,000 miles.

The 1969 Lamborghini Miura set to cross the block as never been restored.  Photo: Courtesy of Gooding & Company.

Boasting its original interior with a matching-numbers body, engine, and drivetrain—all confirmed by factory build records—this Miura is unlike any other that Gooding has seen. “This one is just sensational,” he says. “It’s really impressive. We have clients who will pay the extra dollar for something exceptionally original, and this car fits that bill. It’s one of the nicest Miuras I’ve ever seen.”

Should the car sell for its high estimate of $1.8 million, it would set a new house record for the model, not to mention surpassing the value set by a 1971 Miura P400 SV Prototype, which Gooding & Company sold during its Amelia Island auction in 2011.